How MLK Convinced Nichelle Nichols to Stick With Star Trek 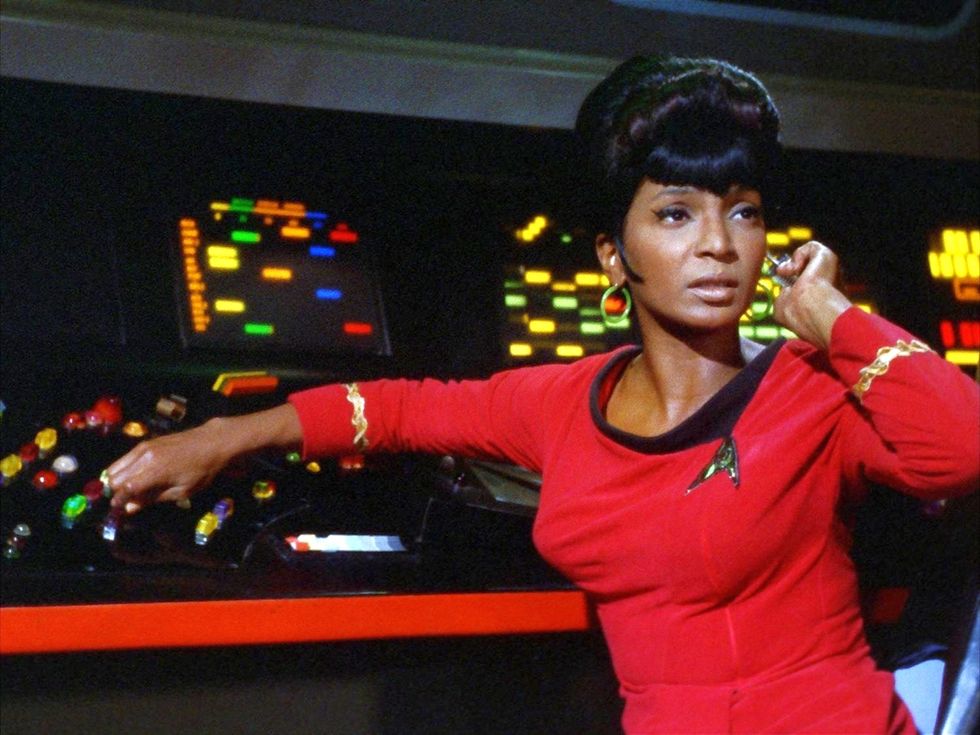 Image of Nichelle Nichols from the January, 1967 edition of Ebony magazine. Photo by Desilu Productions

Star Trek, Gene Rodenberry’s classic, long-running sci-fi series, has long been noted for its progressive values and humanist philosophy. In the world of Star Trek, which debuted in 1966, man’s future was unburdened with petty issues of race and gender. Rodenberry took pains to assemble a diverse cast, and though the studio vetoed the “crazy” idea, he originally wrote the role of the U.S.S. Enterprise’s first officer (which eventually became Leonard Nimoy’s Spock) for a woman. But while the show certainly contended with the bigotries and sensibilities of its day, it still managed to push through a number of historic firsts, many of which came from the pioneering work of Nichelle Nichols, the Enterprise’s own Lieutenant Uhura.

Nichols, whose character’s name comes from Uhuru, the Swahili word for “freedom,” was one of the first black people to be depicted on television in any non-menial role, let alone as a high-ranking ship’s officer. “Oh, man, there were parts of the South that wouldn't show Star Trek because this was an African American woman in a powerful position, and she wasn't a maid or tap dancer,” Nichols told the Huffington Post in 2012. Along with William “Iron Bill” Shatner, she was also one half of the first interracial kiss on television. But in 1967, at the end of the first season, Nichols was fed up with what she felt like was becoming a marginal role, as Captain Kirk and Spock became the show’s “main characters,” and she resolved to move on and pursue her first love, musical theater. At an NAACP event in Los Angeles that year, though, a run in with a civil rights icon changed her mind. At the dinner, Nichols was approached by none other than Martin Luther King, Jr., who introduced himself as a serious “trekkie,” and her biggest fan. King begged her not to give up the role.

“He complimented me on the manner in which I'd created the character,” Nichols said, talking to NPR’s Michael Martin in 2011. “I thanked him, and I think I said something like, ‘Dr. King, I wish I could be out there marching with you.’ He said, ‘No, no, no. No, you don't understand. We don't need you…to march. You are marching. You are reflecting what we are fighting for.’ So, I said to him, ‘thank you so much. And I'm going to miss my co-stars.’”

“And his face got very, very serious. And he said, ‘what are you talking about?’ And I said, ‘well, I told Gene just yesterday that I'm going to leave the show after the first year because I've been offered’—and he stopped me and said: ‘You cannot do that.’ And I was stunned. He said, ‘don't you understand what this man has achieved? For the first time, we are being seen the world over as we should be seen. He says, do you understand that this is the only show that my wife Coretta and I will allow our little children to stay up and watch?’ I was speechless.”

Nichelle Nicols speaking at the 2013 Phoenix Comiccon. Photo by Gage Skidmore via Flickr

Nichols credits the encounter with her decision to stay with the series, which she did through its original run and the first six Star Trek film adaptations. She went on to a long career of acting and voice-over work, and is often cited as an influence on black actors who grew up in this period. Whoopi Goldberg, who herself went on to play a role in a later Star Trek incarnation, often tells the story of first seeing Lieutenant Uhura on the show, a sight that sent her shrieking for her mother: “Hey Mom! Look! There's a black woman on the TV and she ain't no maid!” Notably, Nichols also worked with NASA in the ‘80s as part of a special project to recruit more diverse space crews, a program that resulted in the hiring of the first female astronaut, Sally Ride, as well as Colonel Guy Bluford, who became the first African-American to visit outer space.