Barack Obama and Steph Curry have some great advice about being better men. 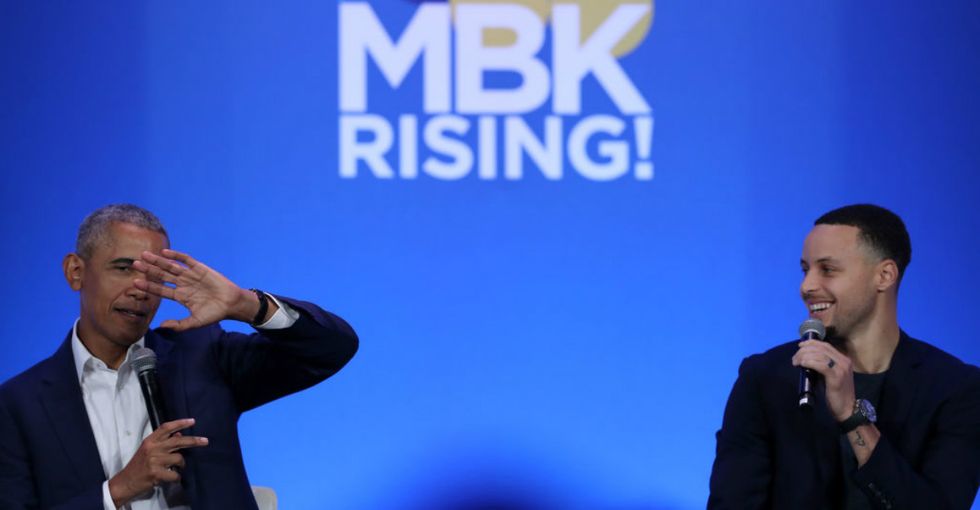 Former President Barack Obama and current back-to-back NBA Champion Stephen Curry are two of America’s most admired men. They represent the peak of male excellence, having risen to the top of their respective fields. Even more importantly, they’d done so while eschewing many of the tropes of toxic masculinity.

Both men are powerful reminders that true “Alpha males” are those who provide, who nurture and who are comfortable with themselves. A two-term president and the greatest shooter in NBA history are both great teammates and both understand that’s the real foundation of why they are admired as exceptional individuals.

So, when the pair got together to offer some advice to young black men values of manhood, it’s not surprising that the talk quickly went viral.

“We live in a culture where our worth is measured by how much money we have and how famous we are,” Obama said to a group of 100 boys in Oakland as part of the My Brother’s Keeper initiative he helped launch in 2012 after the shooting death of Trayvon Martin. “I will tell you, at the end of the day, the thing that will give you confidence is not that. I know a lot of rich people that are all messed up!”

Curry echoed Obama’s sentiment and talked about how his relationships on and off the court and both centered on fostering a culture of teamwork.

"What we do on the court and the joy that comes out of that is second to none, because nothing great is done by yourself," he said.

But it was Obama’s comments about how culture teaches men about their relationships with money, power and women that have gone viral.

“If you are really confident about your financial situation, you probably are not going to be wearing an eight-pound chain around your neck because you know, ‘I got bank. I don’t have to show you how much I’ve got because I feel good,’” Obama said. “If you are very confident about your sexuality, you don't have to have eight women around you twerking … because [you know], ‘I’ve got one woman, who I am very happy with. And she’s a strong woman.’”

Video of Obama’s comments quickly took off across social media, and has already been viewed several million times across YouTube, Facebook and Twitter in just over two days. You can watch the full discussion between Obama and Curry below:

Despite being a very public fan of hip hop music, Obama dug in deeper offering some astute criticisms of how the culture often teaches men to “punk” each other, and women in particular, rather than focusing on masculine values in a way that lifts individuals and communities up together.

“We tend to rise to the expectations that are set for us,” he said. “If a young boy is taught early on, ‘You are going to be kind to people, not bully people,’ that will have an impact. If you say, ‘You treat young women with respect. They are not objects. They are humans with the same aspirations and desires, and they are just as worthy of respect as you are,’ that has an impact. We’ve got to set that tone early in life.”