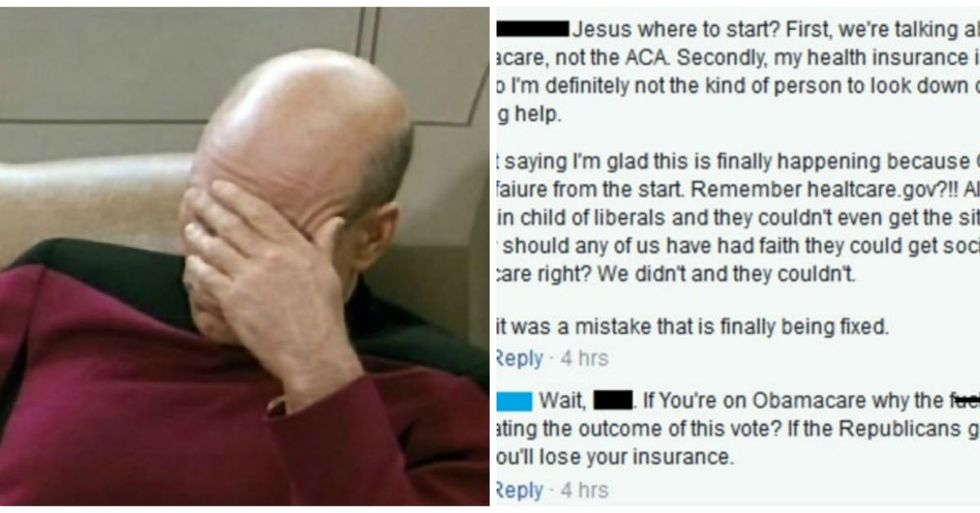 As Republicans debate exactly how they will repeal and replace the Affordable Care Act, aka Obamacare, their biggest hurdle may be supporters who have no idea what’s about to happen to their healthcare.

Case in point: this Reddit user shared screenshots of an argument he had with a friend over upcoming changes to the healthcare law. You see the Redditor’s friend is a conservative voter who was celebrating the end of Obamacare but somehow not realizing it is literally the exact same thing as the Affordable Care Act:

The ensuing back and forth suddenly went silent when the Obamacare critic apparently realized that his insurance is just as much in jeopardy as the anonymous freeloaders he imagines are draining America’s precious resources:

And while this is a pretty sick burn that’s fun to share amongst your like minded progressive friends, it’s also instructive that while Obamacare is almost certainly headed for some big changes, nothing is yet set in stone. With a president-elect who isn’t locked into any specific ideology and a Republican Senate facing a base of voters suddenly reluctant to throw out the health care law, there may be room yet to find a healthy compromise that doesn’t leave everyone hurting.