He’s already pretty overwhelmed, so leave him alone, you guys. 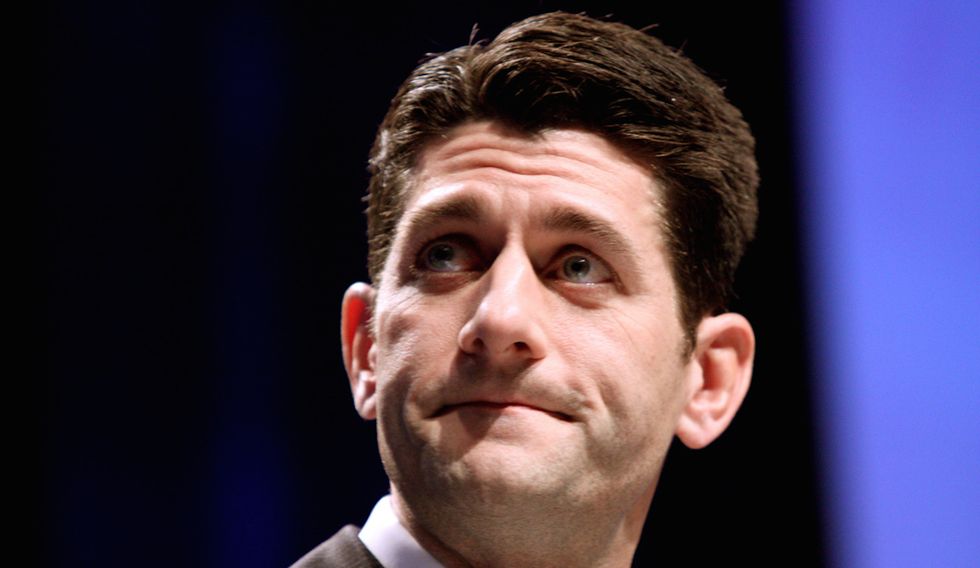 It’s getting so a guy can’t walk down the street in this country without being asked to run for president. Yesterday, House Speaker Paul Ryan spoke to press at the RNC, responding to a theoretical plan to draft him for a POTUS run. “Let me be clear: I do not want nor will I accept the nomination of our party,” said Ryan. In a 2016 race where both of the leading Republican candidates—Trump and Cruz—are widely dismissive and largely unpalatable to much of the party’s establishment, some adventurous conservatives have floated the possibility of a contested convention, in which a more practical, staid choice (like Ryan) could be substituted at the last minute.

But Ryan’s having none of it. “To be the president, you should actually run for it. I chose not to do this. Therefore, I should not be considered, period. End of story,” he told WISN Wisconsin.

Pictured: a mummy, not in business attire. Image by Pedro Sánchez via Wikimedia Commons

It’s hard being the Republican’s one answer to every problem. “Draft Paul Ryan,” they say, whenever an empty seat or staffing hole arises. They did it in 2012, rounding out the Mitt Romney ticket with the young(ish) Wisconsin Representative, and again last year, when the House Speaker job—a thankless chore managing party infighting—was foisted upon him, for sheer lack of any other talent or ideas. Those Republicans sure love Paul Ryan. But why? I’m sure he’s good at something. (Crossfit?) But in a party full of business mummies, each surprised at the slipping traction of their rewarmed 1980s takes on economics and race as they lurch and stagger towards a horrified modern public, Paul Ryan probably looks pretty good.

Compared to the rest of the political field—including the Democrats, who are running presidential candidates at 74 (Sanders) and 68 years old (Clinton)—Ryan is relatively young, and even more relatively handsome. Look at those sad, sweet eyes!

People say he’s a “good guy.” He is blandly likeable; the kind of likeable fellow a marketing team building a person out of information gleaned from focus groups might concoct. This is why his pushers have to continuously struggle to explain the Wisconsinite’s actual areas of focus and skill—“he’s an ideas guy!” they might say, before Ryan is ripped apart by a smirking Joe Biden on national television. Or maybe he’s a principled enemy of the liberal welfare state—before Ryan admits his father’s social security payments funded his early life. Or “he’s a numbers and business dude-type guy,” one might assert, before his impractical budget plans fail to move the needle outside his own political circles.

But hey, I don’t want to rip on Ryan too much. I feel bad for Ryan. This is because I am Paul Ryan, and there’s a good chance you are too. It’s not easy being the Serious Brown-Haired White Guy in 2016. On the lucky side, in the absence of other talent, everyone just sort of assumes you’re smart—look at his thoughtfully furrowed brow! Ryan claims the hallmarks of a thousand societally accepted “smart guys” before him. We fit the mold! The generic, unconsidered assumptions that perpetuate the secret worlds of unspoken prejudice and institutional bigotry gird our every movement and buoy our existence with promotions and pats on the back. But on the other hand, we wake up every morning, desperate and terrified, praying, “Oh, dear God, let me manage to rise to the opportunities my privilege has granted,” unsure of ourselves, just dumb enough to accept our own superiority and just sharp enough to be consumed with the travails of permanent imposter syndrome. Everyone asks us for help with their computer problems. We get no peace, as we’re continually pestered to give people directions (“that guy looks like he knows his way around, and probably won’t mug us”), and are forced to spend our days swatting away constant compliments and attempts to get us to run for president.

The people won’t leave you alone. Oh, no, they’ll have their piece of you yet, Paul Ryan. In refusing to be considered for president Ryan might seem calm, committed to democratic values that preclude a contested convention, but in actuality he is scared, as scared as you can be, when you just want to shut your office door and do your crunches and have PG-13 sexual daydreams about Dagny Taggart and other ridiculously-named Ayn Rand characters, but everyone won’t leave you alone, and they want you to be the president for some goddamn reason. If you don’t believe me, just take one more look at those eyes: