After backing an anti-gay bill, this representative was shamed by his daughter into admitting it was a ‘mistake.’

The bill referred to same-sex marriage as “parody marriage.” 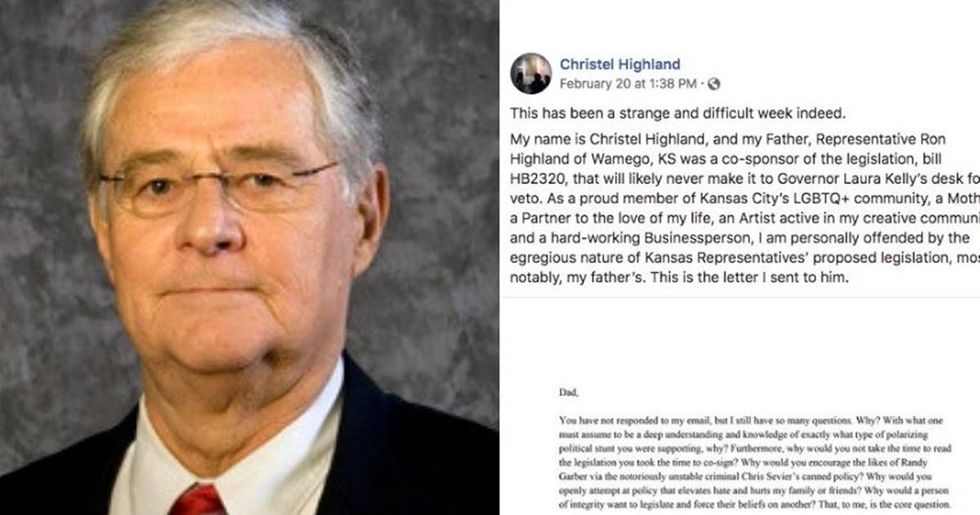 A group of Kansas lawmakers have backed a bill that refers to same-sex marriages as “parody marriages” and seeks to prevent the state from recognizing them. The bill would also allow gay conversion therapy to be practiced in the state.

Among those sponsoring the bill was Republican State Representative Ron Highland.

According to the Wichita Eagle, the legislation has very little chance of becoming law. Should it pass the state legislature, it would certianly be vetoed by the state’s Democratic governor.

Christel Highland reached out to her father about the bill, but heard nothing back. So she took to Facebook to publicly shame him for backing the legislation. Highland describes herself as “a proud member of Kansas City’s LGBTQ+ community, a Mother, a Partner to the love of my life, an Artist active in my creative community, and a hard-working Businessperson.”

“Your most sacred job as an elected official is to serve and protect people,” she wrote to her father. “Your God did not elect you, living, breathing humans beings did. Further isolating the marginalized among the population you serve is far from your duty.

“Hate has no place in public policy. I respectfully request an apology on behalf on my family and beloved friends that this cruel attempt at legislation impacts — viable or not — and I beg that you show yourself to be the honorable man I’ve always known you to be. Ultimately, what is right can never be something that hurts another. You taught me that.”

“I love you, I always will, in spite of your flaws,” Christel Highland told her father. Then she added: “I cannot, however, condone your cruel actions. Shame on you.”

After reading the letter, Representative Highland asked for his name to be removed from the bill.

“The bill that I should not have signed on to cosponsor contained some hateful language which I do not condone, and it is against our Lord’s command to love our neighbors. I have asked for my name to be removed from the bill. The process for doing so is in motion,” Ron Highland said in a statement to the Wamego Times.

“It took strength to do what my Father did, and I’m proud of him for setting an excellent example to his colleagues and constituents by removing his co-sponsorship from HB 2320,” she said in a statement.

“I think this situation is an example of what is possible if we work together toward good with love in our hearts,” she continued. “I can only hope that this is a step in a positive direction where we work to make the pursuit of happiness easier for one another irrespective of birthplace, race, beliefs, or orientation.”