Rick Santorum Tells A Dreamer To Leave The Country On CNN

"That young Dreamer was so raw, so real, it was gut wrenching. Rick Santorum's response? Cold indifference." 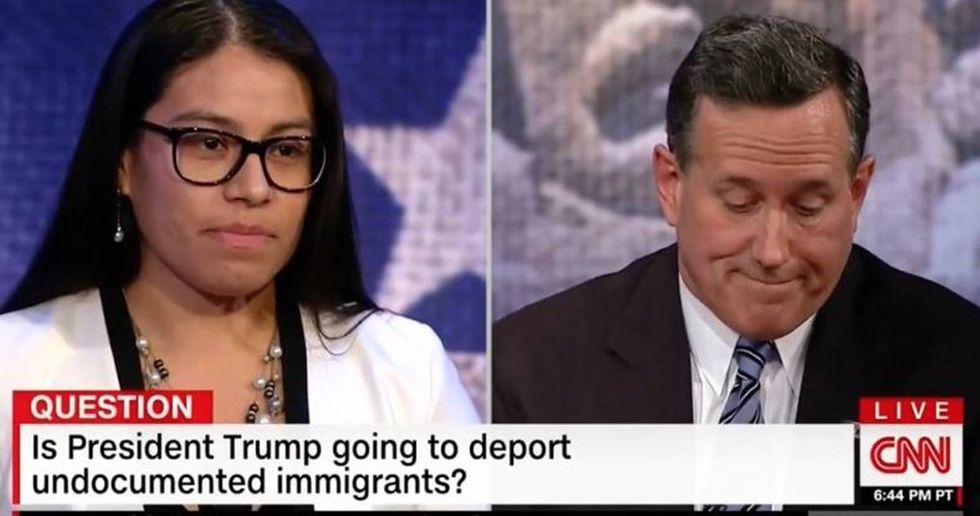 Tuesday, CNN’s Van Jones hosted a town hall event called “The Messy Truth” featuring former Republican Senator Rick Santorum and Republican strategist Ana Navarro. Among the topics discussed was the future of undocumented people brought to the United States as children, also known as Dreamers. Currently, Dreamers are protected from deportation by the Deferred Action for Childhood Arrivals policy (DACA) which the incoming Trump administration has threatened to overturn.

During the town hall discussion, audience member Elizabeth Vilchis, an undocumented mechanical engineer brought to the United States at age seven, asked Santorum how she should prepare for her future. “I stand to lose all the work that I’ve done if the new administration decides to end DACA,” she said. “I will lose my career and will potentially be labeled for deportation,” she said. Vilchis’ question inspired an unbelievably cold-hearted response by Santorum who told her to leave the country.

“What most people in America feel is that you’ve been given a tremendous benefit by being here in this country,” Santorum said. “My final point is that you have the ability to go to any other country right now and apply those wares, and be successful, and reapply to come back to America,” Santorum added. “Go and make the world a better place.” Santorum’s callus response, prompted Navarro to defend Vilchis. “First of all, this is your country,” she said. “No matter what he says, no matter what anybody else says, this is your country.”

.@RickSantorum did you actually just tell someone they have to leave OUR country? who do you think you are?
— jimmy williams (@jimmy williams)1481081668.0

I say we keep the Dreamer with the engineering degree and kick Santorum out. Jesus, what a whitesplaining dick he is.
— TBogg (@TBogg)1481078957.0

This strong, smart DREAMer on #TheMessyTruth is more of a patriot than Rick Santorum will ever be.
— Jamie Redmond (@Jamie Redmond)1481079831.0