Salma Hayek on Her New Children’s Film: It’s “A Tool For Hope”

The iconic actress tells us what makes her latest project–an adaptation of Kahlil Gibran’s “The Prophet”–so special. 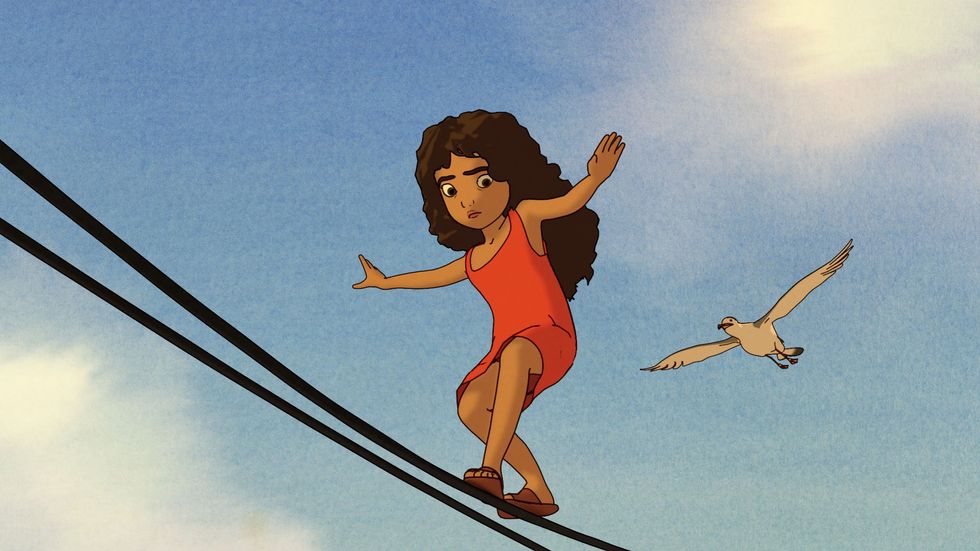 When Kahlil Gibran’s The Prophet was first published in 1923, the 13-chapter book of poems only had a modest audience. It wasn’t until the 60s and 70s that the tome really started to become a bookshelf mainstay, during the rise of New Age spiritualism. Gibran’s erudite lyrics expounding on the nature of love and life resonated with the era’s movement towards Eastern mysticism.

Although it never went out of print, and has been published in more than 40 different languages, the book had never been adapted to the silver screen. Part of the reason was that it’s difficult to adapt poetry to narrative film. But the other reason was that Gibran’s estate—the Gibran National Committee, based in B’Sharri, his hometown in Lebanon—was protective of the material. That is until now.

Made into a feature-length animated children’s film, The Prophet will hit movie theaters across the U.S. on August 7. And it was actress and producer Salma Hayek who is responsible for the book’s first cinematic manifestation, packaged within a story about a precocious, young girl named Amitra—voiced by Quvenzhané Wallis (Beasts of the Southern Wild)—who lost the ability to speak after her father’s death. The Prophet, voiced by Liam Neeson, is embodied in the character of Mustafa, an exiled poet and artist who was imprisoned for seven years by a repressive regime. He meets Almitra just as he’s been given the opportunity to return home, and they join forces on a journey throughout the city, each in search of their own version of freedom. Gibran’s poetry is recited in chapters throughout the story, with each chapter animated by notable illustrators, like Nina Paley and Tomm Moore. GOOD spoke to Hayek about the film, reconnecting with her Lebanese heritage, and the process of adapting one of her favorite books.

I read that the rights to Kahlil Gibran’s work were bequeathed to his hometown in Lebanon, B’Sharri. How did you go about securing the rights to the material for the film? And what point in the creative process did it become clear that the best way to tell this story was an animated film?

Steve [Hanson]—who’s lovely, he’s our partner—worked on getting the rights for eight years, and finally got them. Then he tried to make a live-action film for many years and they couldn’t figure out how. They thought about making a movie that was 13 poems, but with half the budget, and this is the point at which they came to me. I said, that’s going to be a disaster, because with that budget, you cannot do 13 chapters. It’s not going to have the quality of great animation. It’s just too much information for anyone to sit through. If it all comes at you at once, it’s not going to shine.

This is when I came up with the concept of making a storyline, like a framing story, and then doing the poems that were organic to that framing story. Also, it was a big deal for me to take this. If I didn’t think that this film was going to be a contribution, I wasn’t going to touch that book because it was too important to me. So it’s not just about reciting it, and doing an art house film—to me, it had to have a life beyond just “art house film“. It had to be, almost, a tool for hope for the world. I wanted to inspire, through his words, young people and children.

The themes of the film are certainly universal, but that was also a characteristic of The Prophet, and the reason why Gibran’s poetry resonated so widely and globally. But why make it into a children’s film? What is it about the genre of children’s film that makes it conducive to telling this kind of story?

I made it into a story that would be friendly for everyone, and into animation, for two reasons. One, because the poems are told through images. So for the children who don’t know some of those words, it doesn’t matter, because they are getting the essence of what the poem is and the message of his words through images.

But also because the movie is about freedom and our intention was to create a film that didn’t talk about freedom but that made you experience and feel freedom. That’s why we gave all the different animators absolute freedom to create whatever they wanted. We chose animators from different religions, different countries, different ages, so that it wouldn’t just be one perspective. And everyone got to choose what style of animation. There wasn’t even a color palette that they had to follow.

Usually you go see films so that you can distract yourself from your life. In this film, in this moment, you take a journey inside of yourself to remember to appreciate the simple things in life that bring us all together. And every poem means something different to everyone. Everybody picks a different one that resonates in their heart.

The first time I read the book it wasn’t one section specifically. For me, what was most impactful was the fact that I felt like my grandfather was talking to me. I discovered the book through my grandfather because he had it on his bedside table. I saw the cover, the face that Kahlil drew, and it was so enchanting. It haunts you. It stayed in my brain. I didn't even know the name of the book, because I couldn't read, but then I found the book again when I was like 18 or 19, and I saw the same face looking at me and it made me think of my grandfather. When I read it, what was shocking to me was that I really felt he was talking to me through the book, and not only teaching me about life, but I got a sense of who he was because he loved that book and because of where he came from. It allowed me to have a relationship with my grandfather even after he was dead.

Close to the end of the film, the protagonist, Mustafa, is involved in a scene that’s evocative of the events of the Arab Spring in 2011. Without giving too much away, he has a contentious relationship to a government regime. Was that plotline an intentional reference to the uprisings of the Middle East and North Africa?

You went to Lebanon, your grandfather’s homeland, for the first time this past year. How was that experience? Was it like you imagined?

No. My imagination is good but not that great. I could never have imagined such a profound, special experience that I had there. My father couldn’t have. I was imagining something very amazing, but it was beyond that. I felt closer to Kahlil than I’ve ever felt. I felt him in a different way. When we went to his museum, where they have his tomb, it says—I don’t remember the exact quote—“You cannot see me or touch me but I’m standing right next to you.” I swear I felt that he was there. And in some of the hard times that we had after his passing, I think about that quote. You know, the reencounter with my family, with my roots, the love of the people, the spirit of the people, the beauty of the place—it was just spectacular.

The Prophet is in theaters August 7.