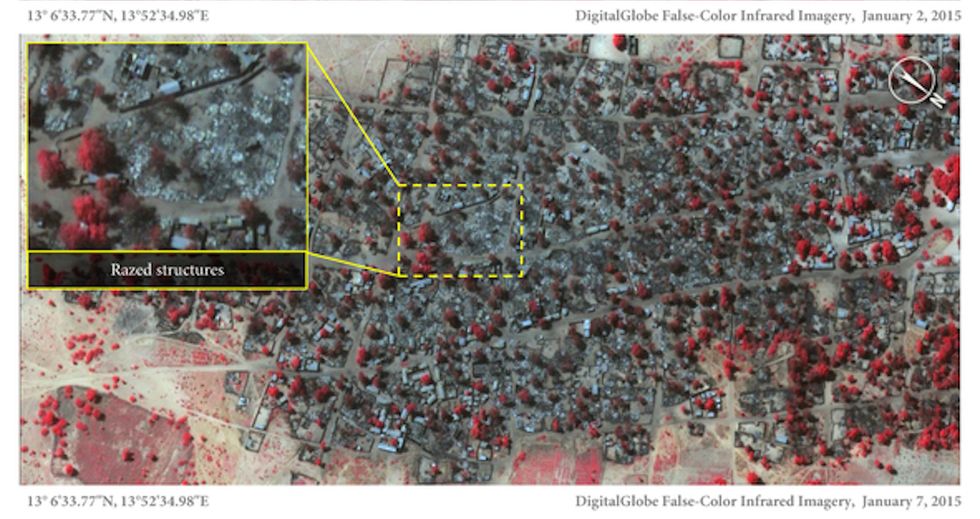 These before and after images of a Nigerian town depict the destruction Boko Haram fighters inflicted, nearly wiping the towns off the map. Images via Amnesty International.

With news of the Charlie Hebdo attacks dominating international headlines, the news of Boko Haram’s latest assault might not have even penetrated your news feed. The attack reportedly resulted in the deaths of 2,000 people, and the refugees who survived the massacre tell horrific stories about the atrocities waged on their town. Now, Amnesty International has released satellite images that depict the bleak aftermath of the violence. The before and after photos reveal, with startling sharpness, how Boko Haram wrecked the neighboring towns of Baga and Doron Baga, destroying or damaging over 3,700 structures in the area over the course of four short days. Doron Baga, Amnesty International researchers said, was almost entirely demolished.

“These detailed images show devastation of catastrophic proportions in two towns, one of which was almost wiped off the map in the space of four days,” said Daniel Eyre, Nigeria researcher for Amnesty International. “Of all Boko Haram assaults analysed by Amnesty International, this is the largest and most destructive yet. It represents a deliberate attack on civilians whose homes, clinics, and schools are now burnt out ruins.”

Many people in the local area have fled across borders to Chad, further exacerbating an already overwhelming refugee situation. There, they recounted the cruelty inflicted on their neighbors, as Boko Haram burned down their homes and indiscriminately shot at people fleeing the varea.

“They killed so many people. I saw maybe around 100 killed at that time in Baga. I ran to the bush. As we were running, they were shooting and killing,” said one witness in his 50s to Amnesty International researchers.