Guy’s sexist list explaining how to be a ‘beautiful woman’ blows up in his face.

He claims that any woman who disagrees is “undersexed.” 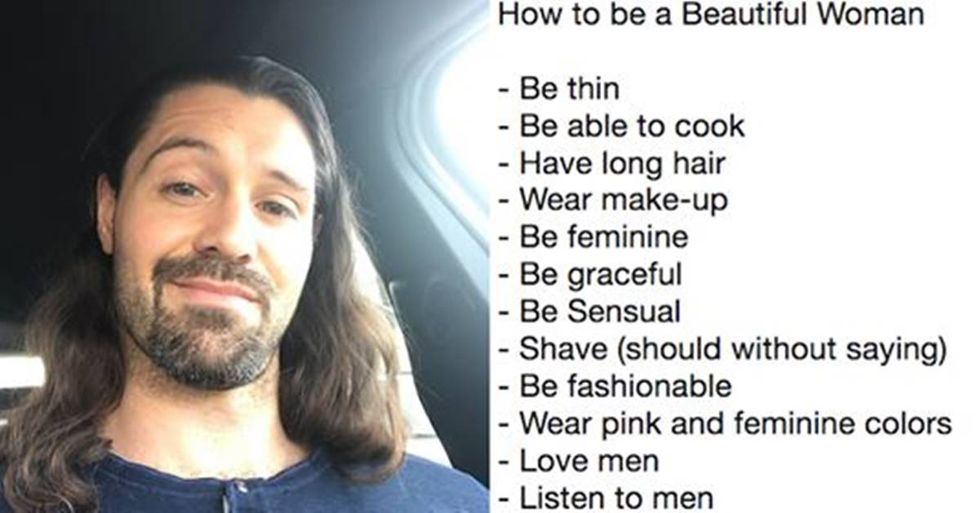 Every day presents a fresh opportunity for a man online to tell all women how he feels about them. Today’s culprit is none other than Alexander J.A. Cortes, the speaker and writer who boasts the ability to “optimize your life.”

In case you’re not familiar with his work, he once went viral for mansplaining why women shouldn’t dye their hair, and now he’s back with a fresh axe to grind.

In Cortes’ latest piece of performance art (which is unfortunately just his real personality), he unironically laid out a bonkers explainer list on “How to be a Beautiful Woman.

This is truly the apex of flaming trash no one asked for, and yet, here we are swimming in this overheated dumpster.

How to be a Beautiful Woman

Before the backlash poured out in its full and vivacious glory, Cortes followed his ambitious list up with disclaimers stating that any women who disagree with it are “undersexed” and angry.

If you show them this list and they become angry, that lets you know that they are harpies that you never want to breed with

and that they would be terrible mothers

He even posted a selfie to really get women lusting over his infinite knowledge of desirability.

Here’s a selfie that you can use to satisfy your fantasies pic.twitter.com/7W9qSmYP9P

Based on these replies, a lot of you poor women sound like you’re under fucked

If you follow the lessons on the list, you can become a woman that Masculine men are attracted to

Contact me to learn how to be beautiful https://t.co/zNvAjrqfeC

so if I ignore your reply, don’t feel bad

Beauty can always be learned

He even laid out his exhausting, cliché, and heteronormative expectations of women as indicators of their “wife value,” which is a fictional currency men in the Red Pill community created to devalue women that scare them.

Your wife value will matter

There is a roadmap for this as well https://t.co/YFrFt1aIJB

His fat-shaming and bonkers beauty expectations would suggest he views himself as a sort of modern-day Gaston, traipsing about the village with an impossible neck, waiting for his Belle.

If you’re angry, it might be because your excess bodyfat is causing hormonal fluctuations that make you emotional

What you'll observe here is the peak of Delusional feminism, women who believe that simply because they exist, they are "valuable" despite being bitchy & horrifying

More redflags than a Chinese parade

After doubling down on his cartoonish brand of misogyny, Cortes dedicated another selfie to all the women that want to “hate fuck” him.

One more photo for all the women who read this and want to hate fuck me SO BAD pic.twitter.com/lr34ubiXEK

Unsurprisingly, his unbelievable existence and wildly outdated views on women and relationships ushered in a proper dragging.

You are genuinely, and I mean this truthfully and sincerely, not remotely physically attractive to me.

Well I for one am absolutely shattered that my dream of having a man who looks like he uses his own tears as lubricant love me will never come to fruition. This is truly a dark day.

(This disgusted look also applies to the “men & women” who liked this nonsense he’s posted, &/or are responding to it positively.) pic.twitter.com/sDJ4Mktcmr

The guy from high school who still begs you to get the band back together so he can play the bass; he still shows up to high school parties and touches teenage girl's neck and hair.

People truly cannot believe he’s real, but if you dive into his social media, he seems to be genuinely drinking the Kool-Aid.

DUDE. DO U ACTUALLY ASK THE WAITER FOR EXTRA WATER (UNTOUCHED) AND AN EXTRA PLATE AND STUFF TO MAKE IT LOOK LIKE UR ON A DATE???pic.twitter.com/jM6yTKe24p

I'm like 7 of those things. Guess I'm a beautiful woman.

He brought all of this on himself.

His tweet inspired a few response lists with suggestions for men.

How to be a handsome man
- jacked
- able to cook
- proper hair cut
- clean, presentable & fashionable
-masculine - (even in pink)
- lithe, fit
-sensual ( without being ridiculous)
-solvent
-clean shaven
-Love & listen to women.
Get classy gentlemen!

How to be a tool

Honestly, it’s mildly terrifying and deeply depressing that Cortes actually walks around the world with these alien ideas about women. However, in the very least, he has given the internet so many jokes in the process.