After distressing footage of a dog named Snoop being abandoned went viral, Snoop Dogg offered to adopt the pooch.

The dog was named Snoop, too! 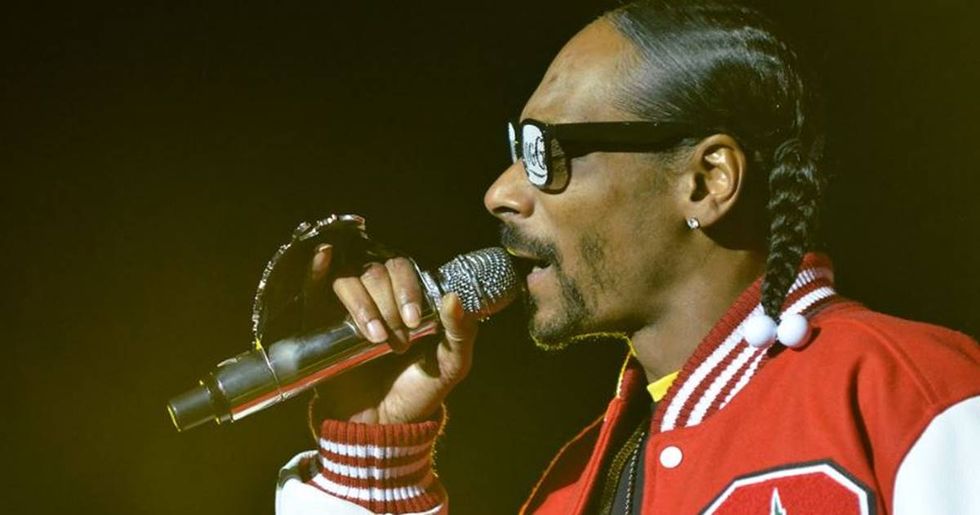 Distressing footage caught by a security camera at Stoke-on-Trent, England went viral after it was tweeted out by the The Royal Society for the Prevention of Cruelty to Animals on December 24.

The video shows a man dropping off his Staffordshire Bull Terrier and its bed by the side of the road then jumping back in his car without the dog. The Staffie is clearly in distress and begs to be let back in the car, but the man eventually drives off.

PLEASE RT! We have CCTV footage of a man callously dumping a dog in Stoke-on-Trent. The distressed dog chases after the car as it drives away. Please help @RSPCA_official find the man responsible. Awful that someone can do this! The dog is thankfully ok and now safe pic.twitter.com/AW8HNvVwdQ

Research shows that abandoned dogs go through the same type of distress a human would feel after losing a loved one. This could lead to health problems and eventually death in the streets or at a shelter.

Luckily, the Staffie was rescued by the Royal Society for the Prevention of Cruelty to Animals (RSPCA) and named “Snoop” after Snoop Dogg, the rapper.

Snoop was discovered by a passerby after being abandoned by the roadside, and is recovering amazingly in our care. He's a super sweet boy who loves being around people, and as he's not yet available for rehoming, he's been enjoying some scrumptious snuggles with our animal centre staff

Snoop Dogg heard about the abandoned animal and said the dog could have a home with him back in Los Angeles. “There is always room for another dog in Casa de Snoop,” the rapper from Long Beach, California told The Daily Star. “If he really needed a home then he has one with us. But I don’t think there is going to be any shortage of loving homes after all the exposure he has got.”

According to Celebrity Pets, Snoop has owned up to 11 dogs at a time, including multiple pit bulls. He’s also an investor in Dog for Dog brand dog food, which donates a bag of food to a rescue shelter for every bag sold.

Although Snoop the Staffie has yet to be rehomed, things are looking up for the pooch. “At the moment he isn’t up for rehoming while our investigation into his abandonment is ongoing,” Rachel Butler of the RSPCA told People. “However, we have had scores of people wanting to rehome him so we are certain he will not be waiting long for a new home.”

Thousands of people have come forward to offer abandoned dog Snoop a home after he was dumped at the side of a road just before Christmas.
But how's he getting on now?@Ruth5News caught up with @RachRSPCA, who's been looking after him. #5News | @RSPCA_officialpic.twitter.com/MxXCSRvx8A