For the first time ever, the Sports Illustrated swimsuit issue will feature a "burkini babe."

“Whether you are wearing a one-piece, a two-piece, or a burkini, you are the pilot of your own beauty.” 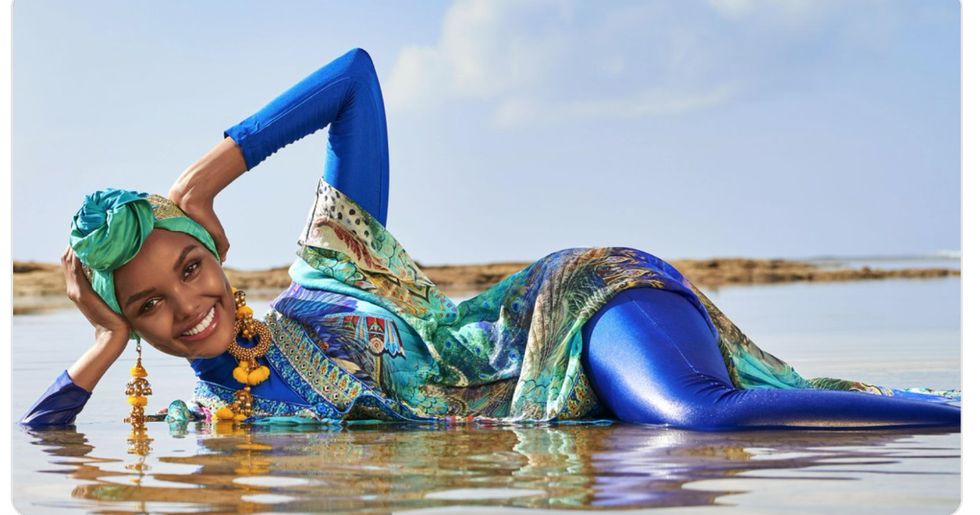 The Swimsuit Issue had been a place where women who don’t feel comfortable even showing off their stomachs could feel left out, not to mention women who embrace modesty for religious reasons. But that’s about to change. Model Halima Aden will become the first-ever Sports Illustrated swimsuit model to wear a hijab and burkini, a bathing suit that covers the whole body worn by some observant Muslim women when the issue hits shelves on May 8th.

“Ladies, anything is possible,” Aden said on Instagram. “Being in Sports Illustrated is so much bigger than me. It’s sending a message to my community and the world that women of all different backgrounds, looks, upbringings … can stand together and be celebrated.”

Aden was born in the Kakuma refugee camp in Kenya, but moved to Minnesota when she was a child. The photo shoot gave her a chance return to Kenya and come full circle. “I keep thinking [back] to six-year-old me who, in this same country, was in a refugee camp,” Aden said. “So to grow up to live the American dream [and] to come back to Kenya and shoot for SI in the most beautiful parts of Kenya–I don’t think that’s a story that anybody could make up.”

Aden’s issue will give the model an opportunity to make other women like her feel represented. “Growing up in the States, I never really felt represented because I never could flip through a magazine and see a girl who was wearing a hijab,” Aden said. Aden was also the first woman to wear a hijab in the Miss Minnesota USA pageant and opted to wear a burkini during the swimsuit competition portion of the event.

Sports Illustrated wants to send women the message that women are beautiful regardless of how we like to look, and we don’t have to have someone’s idea of what’s “sexy” foisted upon us. “At SI Swimsuit, we strive to continue to spread the message that whether you are wearing a one-piece, a two-piece, or a burkini, you are the pilot of your own beauty,” the magazine said. It’s about time we’re shown more than just the string of string bikinis we’ve grown accustomed to seeing in the magazine.

The decision to include a model in a burkini came with a great deal of criticism, but there were many ready to come to Aden, Sports Illustrated, and the burkini’s defense.

@SI_Swimsuit I think she's gorgeous and if this is what she chooses to wear, then who are we to say otherwise. Woul… https://t.co/bDgC52urOg
— Sydney Chandler (@Sydney Chandler) 1556568176.0

@theREALbenORR @SI_Swimsuit Comparing a woman wearing something within her religion and beliefs that makes her comf… https://t.co/RjnScSNvqd
— Stream Daydream✨ (@Stream Daydream✨) 1556571411.0

@SI_Swimsuit Good for Halima. More nonsense for the larger debate. If you’re going to wear the hijab and cover your… https://t.co/YUaDHDTuYo
— Shireen Qudosi (@Shireen Qudosi) 1556549638.0

At the end of the day, it’s important to embrace what makes you feel the most comfortable, and not a standard of beauty someone else sets for you.