A growing co-op shows that saving bees can be good for business. 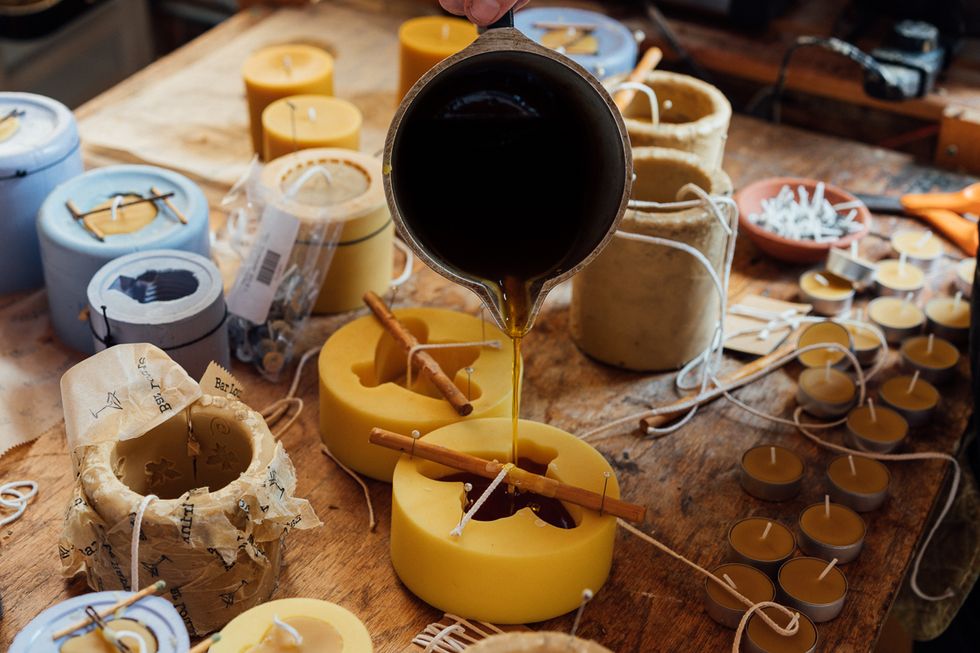 You’ll find the members of The Chicago Honey Co-op in the backyards and on the rooftops of the third-largest city in America, throwing on veils and heavy-duty gloves in order to get up close and personal with a swarm of stinging insects. The co-op, an urban beekeeping initiative founded in 2004, will even teach you how to wrangle your own bee colony, if you’re up for it.

“One thing that makes us unique to the beekeeping movement is that we’re a co-op, so we’re a democratically run nonprofit with no designated boss,” says member Sydney Barton. “We have a board that decides on certain issues, but major decisions go to our entire membership, which is about 19 members, and we vote on it.”

The co-op maintains beehives, harvests honey, holds classes and workshops, sells products to local farmers markets, and—perhaps most important—advocates for the sustainable agriculture movement. It also has a CSA (community supported agriculture), which means people can buy a $75 membership online and receive a certain allotment of honey each year, spread out through weekly pick-ups at local farmers markets.

Despite this steady source of income, Barton explains that the co-op runs on a very tight budget, which inspires them to be creative and frugal in how they spend money as an organization and try to grow. Office space isn’t much of an issue, as most of the business of the co-op is accomplished outdoors. “My favorite place to work is outside at one of the apiaries [a collection of beehives]. It might seem unusual ... and while it's very intense, it's also relaxing. You have to concentrate on what you're doing and forget everything else,” she says.

Barton, who runs the co-op’s website, adds that one major key to their organization’s success was the use of Squarespace in building and maintaining the co-op’s online presence. Rather than paying a third party to develop an expensive website, Barton took the role on herself.

“The interface with Squarespace has been really easy to use because it’s intuitive and easy to control, especially with maintaining and designing the website,” Barton said. “The website functions primarily in three ways, as a means of communicating information about our co-op, as a source of information about honeybees and beekeeping and as a platform for online sales of our products. So it’s very important to the success of our organization, and we were able to save lots of money over the years by using Squarespace.”

One of the reasons urban beekeeping initiatives have grown in popularity lately is due to colony collapse disorder. Environmentalists and bee scientists in the field first recognized this issue in 2006 following a dramatic decrease in honeybees throughout the world, most notably in North America. It might be hard for an average person to comprehend what colony collapse disorder really means, let alone its economic implications on the agricultural industry. In short: No bees means no watermelons, no apples, no almonds. Without bees, agriculture is essentially a non-starter.

Which is why small beekeeping initiatives like the Chicago Honey Co-op are so gung-ho about educating their neighbors about the problem, while instilling sustainable agricultural habits in the heart of the city that can protect future generations of bees.

Michael Thompson, another member of the Chicago Honey Co-op, adds that well-raised bees lead to healthier fruits, as well as higher-quality honey. “If you are looking for clean, good, fresh honey, buy it directly from the bee farmer. Beekeeping products in larger stores are often mixed from many sources from all over the world, and this practice is difficult to track so it can lead to impure products,” Thompson said.

In Chicago specifically, the Honey Co-op makes a point to engage local communities in their efforts. Their three apiaries (also known as bee farms) are located in the neighborhoods of Back of the Yards, Bridgeport Humboldt Park, and West Town. And one of the most prominent farmers markets the Chicago Honey Co-op participates in is the Green City Market in Lincoln Park, which is the city’s only year-round sustainable farmers market.

“I love the Green City Market. I’m inspired by the small farmers and food producers there who work to make their crops and products sustainable. They don’t [have easy access to] capital so they have to be creative in how they run and grow their business,” Barton said.

That creativity and connection with the local community has instilled a loyal bunch of beekeepers (and satisfied bees pollinating urban gardens all over Chicago).