The revolutionary rubbers are designed to help wearers make informed sexual decisions within the privacy of their home. 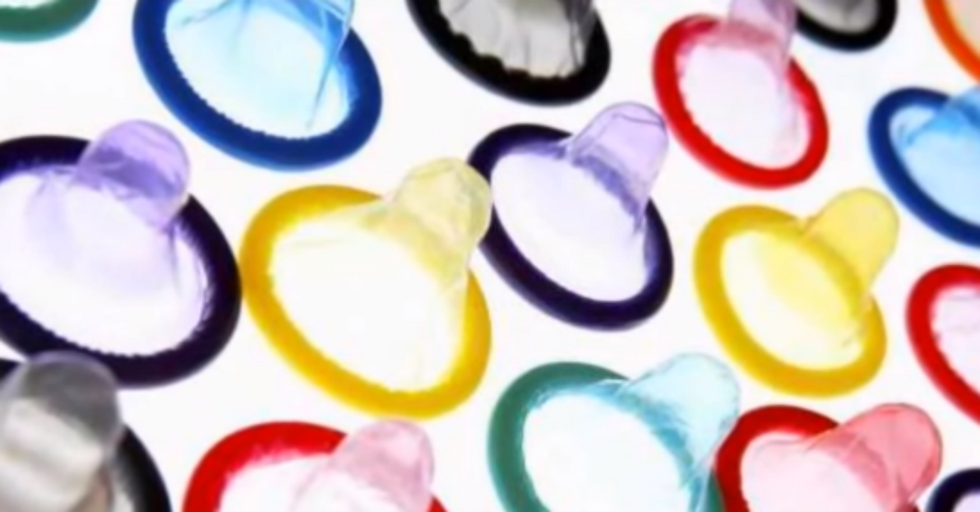 For being what essentially amounts to a latex wall, the humble condom does quite a lot of work: It helps prevent unwanted pregnancies, curbs the spread of sexually transmitted diseases, and even comes in a variety of shapes, sizes, and textures, all designed to enhance the sexual pleasure of its wearer and their partner. Condoms exist to make sure everyone has a good—and more importantly, safe—time.

When it comes to condoms, though, there’s always room for improvement. Just ask Daanyaal Ali, Muaz Nawaz, and Chirag Shah. The three make up a teenage trio of budding inventors whose new prophylactic design not only helps prevent the spread of sexually transmitted infections, but can immediately identify any nasty STIs lurking in a sexual partner's nether-regions, notifying the wearer of exactly what they might be exposing themselves to.

Ali, Nawaz, and Shah—ages 14, 14, and 13, respectively—recently unveiled the innovative concept condom at London’s TeenTech challenge, where they ultimately took the competition’s top prize. Dubbed “S.T.EYE,” their condom relies on a layer of fluorescent molecules which bind to common sexually transmitted bacteria and viruses, like herpes, HPV, and syphilis. Those fluorescent molecules are then engineered to gently glow a specific color based on the particular infection detected. Sure, it might be painfully awkward when, mid-coitus, you realize that soft bedroom illumination isn’t mood lighting, but actually a sign of your parnter’s unannounced STI, but as Ali explained to The Daily Mail:

“We wanted to create something that makes detecting harmful STIs safer than ever before, so that people can take immediate action in the privacy of their own homes without the invasive procedures at the doctors.”

It’s unclear whether the condom is designed to work reciprocally for both wearer and their partner, or only for those in contact with its outer layer. Furthermore, the S.T.EYE’s molecular design currently seems only designed for male penetrative intercourse, and has yet to be applied to female-focused and unisex contraceptives. Those iterations may be yet to come, though, as an email from a TeenTech representative to The Daily Dot confirms that the condoms currently are “very much a concept and... not a finalized design.”

Still, it seems as though the future of safe sex is looking bright. Or, at least glowing softly.