This terrifying air rescue will make you never want to go hiking again. 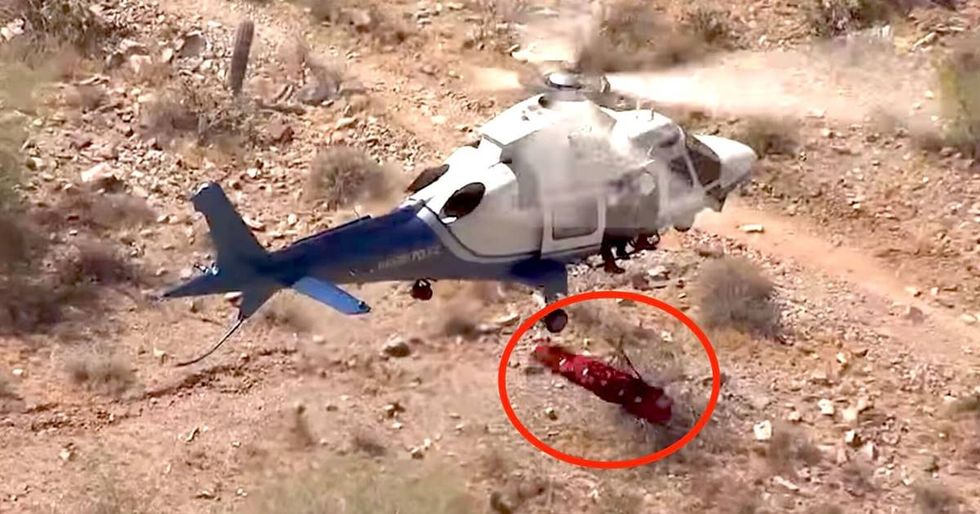 When rescue teams can’t get an ambulance to a remote area where someone has been hurt, they send a helicopter to bring the injured person to a local hospital.

It has to be traumatizing to be hurt and suspended over a hundred feet off the ground on a stretcher and then fly 100 miles-per-hour through the sky, but this rescue Tuesday in Arizona is one of the most harrowing helicopter rescues ever recorded.

It all started when a 75-year-old woman injured her hip while hiking on Piestewa Peak in the Phoenix Mountains. Because the woman was in a remote area, the Phoenix Fire Department dispatched an airlift to bring her to a nearby ambulance.

“Firefighters made patient contact and decided that the best course of action was to fly the patient off the mountain,” Captain Rob McDade of the Phoenix Fire Department told reporters at a press conference.

When the helicopter began to take off with the woman attached via a dangling stretcher, it began to spin uncontrollably. Over the course of what had to be the longest two and a half minutes of the woman’s life, she spun in a complete circle 175 times.

“Sometimes when we bring the helicopter up from the ground, it will start to spin, so we have a line attached to the basket to help prevent that. Today it didn’t. The basket started to spin,” chief pilot of the Phoenix police department’s aviation unit Paul Apolinar explained at a press conference.

“They tried to stop some of the spin with the line that Paul was referring to, but that didn’t work and it eventually broke,” Derek Geisel, the rescue pilot said, “the phenomenon is known in the hoist-rescue industry.”

The woman was eventually put in an ambulance and taken to a nearby hospital. She experienced some nausea and dizziness but is expected to recover.