Let's find a way to fix that. 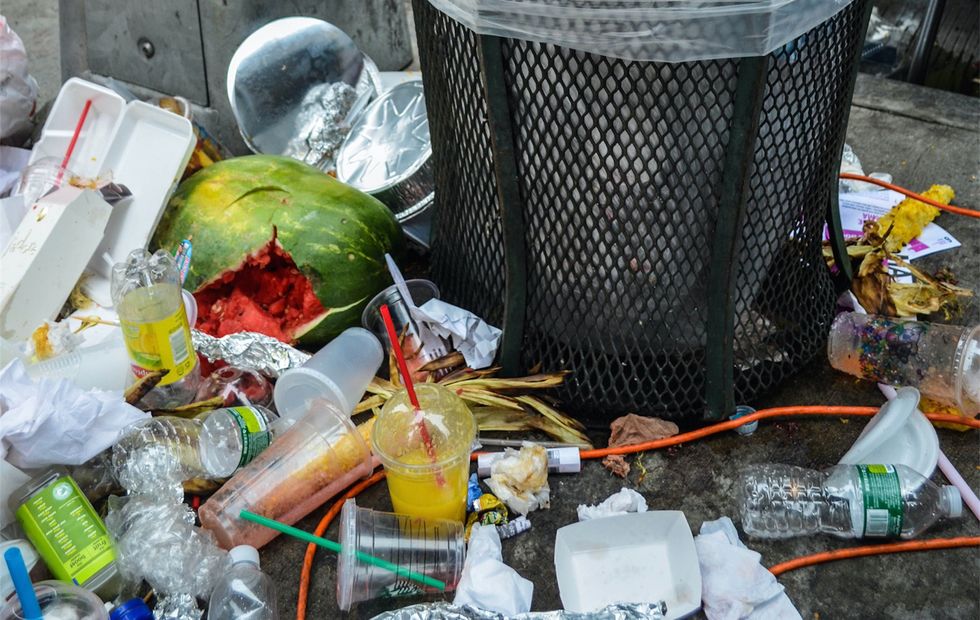 This month, a landmark decision was made to cut the amount of food we waste in the United States in half by 2030. Americans currently waste one-third of our food supply each year—that’s 133 billion pounds that currently go to landfills, yielding the third largest source of methane in the US. Not only does this mean wasted money, time, and fuel invested in farming, harvesting, and transporting food that does nothing but harm the environment, but it is also a lost opportunity to use the food in productive ways, like creating energy, enriching farming, or feeding people in need.

This isn’t just an American problem but a global one—the U.N. reports that about one-third of food around the world is wasted, which is equivalent to 750 billion dollars, or the GDP of Switzerland. So, yes, it’s a big problem.

Some have gone rogue, finding innovative ways to tackle the problem. (Read: Taking the trash cans away in a restaurant kitchen, selling nearly expired food or food that doesn’t meet our high aesthetic standards, or even outlawing the act of wasting food.) San Francisco has addressed the problem with legislation that makes composting a city ordinance, and has made significant headway—more than 1.5 tons’ worth. While Americans currently compost only 5 percent of food scraps, the city, with more restaurants than any other in the country, diverted 80 percent of its waste from landfills through the composting initiative. New York City, too, is taking action. Thanks to a voluntary pick-up service and initiatives in the school system, the city diverted 13,000 tons last year and now plans to send zero waste to landfills by 2030.

“To the extent we can ensure that food scraps go to compost rather than the landfill, we will reduce pressure on landfills [and] reduce greenhouse gas emissions, because rotting food creates methane,” explains Jeremy Kranowitz, executive director of Sustainable America. Methane is 23 times as potent as carbon dioxide; that is, it’s far more efficient at trapping heat. While composting material does generate some methane, it’s very little when done properly, and significantly less than in a landfill.

There’s savings to be had, says Kranowitz: “For people that pay for their trash to be picked up at the curb, it will save money, because collection costs will go down.” And scraps, he says, will quickly become nutrient-rich compost that acts as fertilizer, reducing the need to buy soil supplements.

But a widely accepted hierarchy published by the Environmental Protection Agency (EPA) of best-to-worst ways to divert waste that’s already been generated put composting in fourth place in its rank. In essence, the organization recommends feeding humans first, and then feeding animals. If neither can be fed with the excess food, it is to be converted into energy (via an anaerobic digester like this one just outside Disney World). Beyond that, the waste is to be composted, and, as a last resort, sent to a landfill to be incinerated.

The EPA’s emphasis on feeding people with the mass amounts of excess food our country generates is not only good for the environment, but for the 1 in 7 Americans who struggle with food insecurity.

And donors don’t have to worry about liability. “[F]ood that is donated is protected under the Bill Emerson Good Samaritan Act,” explains Kranowitz, pointing to a law designed to encourage restaurants and grocery stores to donate food to non-profits for needy individuals. If that’s not enough, a tax incentive might be convincing.

Kevin Bateman works in a warehouse at an Atlanta food bank where they connect food donations to non-profits who feed individuals. “It’s amazing—if the temperature on a truck is not correct or if any type of produce looks off, a retailer will reject it…There’s so much out there that just isn’t quite right for a store’s quality standards,” explains Holly Royston, charged with food sourcing at Atlanta Community Food Bank. The food bank diverted 30,000 tons of excess food from restaurants, caterers, large distribution companies, and more. “It’s like helping everybody, helping the community [and] the city,” Bateman says. He started at the Food Bank in 2007 through a temp service, but decided to stick around. “I just love what I do.”

Sustainable America is working on a definitive list of organizations that will pick up excess food for donation, like Atlanta Community Food Bank does.

In the meantime, others are jumping in to fill the gap. “We saw an opportunity to apply technology to the problem,” says Emily Malina, co-founder of Spoiler Alert, an app set to launch this fall that connects people with excess food to those who need it. The app was piloted in Massachusetts earlier this year and diverted 10,000 pounds of food in that 6-week period alone. “We were able to move food really quickly—we had transactions happening in just a few minutes.”

Still, for household food waste, composting is a good option, says Kranowitz. “Folks don’t really think that they can compost,” he says, referring to those who worry about lacking space or an odor. “Even if you live in a small apartment, you can still compost and vastly reduce the amount of waste.”

Kranowitz talks about the way our cultural norms around car safety have evolved over the years—where a seatbelt was once optional, it’s now a mandate widely practiced—and how our treatment of food waste should evolve too. “Some of these efforts [like legislation] start to get us to the point where we say ‘Of course these food scraps are going to go into the compost bin,’” he says.

“It’s about creating that cultural norm.”