These Syrian Refugees Recreated Lost Monuments of Their Homeland—in Miniature

The artists want to teach their children about a country they have never known. 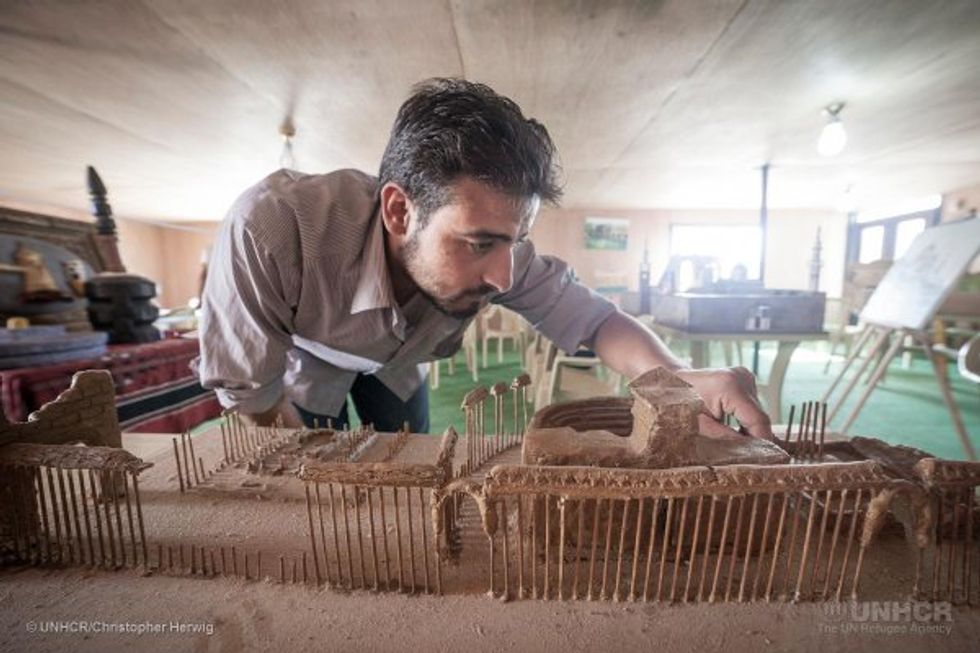 Mahmoud Hariri works on his model of Palmyra. Image via Twitter

Mahmoud Hariri, a 25-year-old teacher and painter from the southwestern Syrian city of Daraa, thought he would live in the refugee camp for only a few weeks. “But when I realized it would be years, I knew I had to start again or lose my skills,” he told the UNHCR’s Tracks website.

Hariri, now joined by five other Syrian artists, is the head of a major art project in Jordan’s Zaatari refugee camp. The goal is to recreate a number of vital Syrian historical sites—most of which have been damaged or destroyed in the five-year civil war that has killed an estimated 250,000 and displaced 12 million.

The Citadel of Aleppo is one of the oldest and largest castles in the world, and was damaged in 2012 when combatants used the fortress as an artillery battery. Image via Twitter

Hariri’s first project recreated the ancient city of Palmyra out of kebab sticks. As the project got underway, the artist heard the site had fallen under the control of Islamic State fighters.

“I’m very worried about what is happening,” Hariri told Tracks. “This site represents our history and culture, not just for Syrians but all of humanity. If it is destroyed, it can never be rebuilt.”

Palmyra’s 2,000-year-old Temple of Bel has since been damaged, but not destroyed.

Other miniature projects include the Deir ez-Zor suspension bridge (destroyed by shelling in 2013); the 1,300-year-old Umayyad Mosque in Damascus; the Norias of Hama (a great waterworks project that may have been damaged by fighting); statues from the ancient city of Damascus; and the Citadel of Aleppo (used by combatants as an artillery battery in 2012).

The six artists involved in the project. Image via Twitter

“The project has … given the artists a sense of purpose,” Hariri said. “By doing this work, they feel like they are at least doing something to preserve their culture.”

The artist also said the project would help the Syrian community remember the great monuments that have slowly faded from their collective memory. “There are lots of kids living here who have never seen Syria or who have no memory of it,” he said, “They know more about Jordan than about their own country.”

Another view of the Citadel of Aleppo. Image via Twitter