An 18 pound humanoid robot that perches on the shoulders of runners and feeds them. 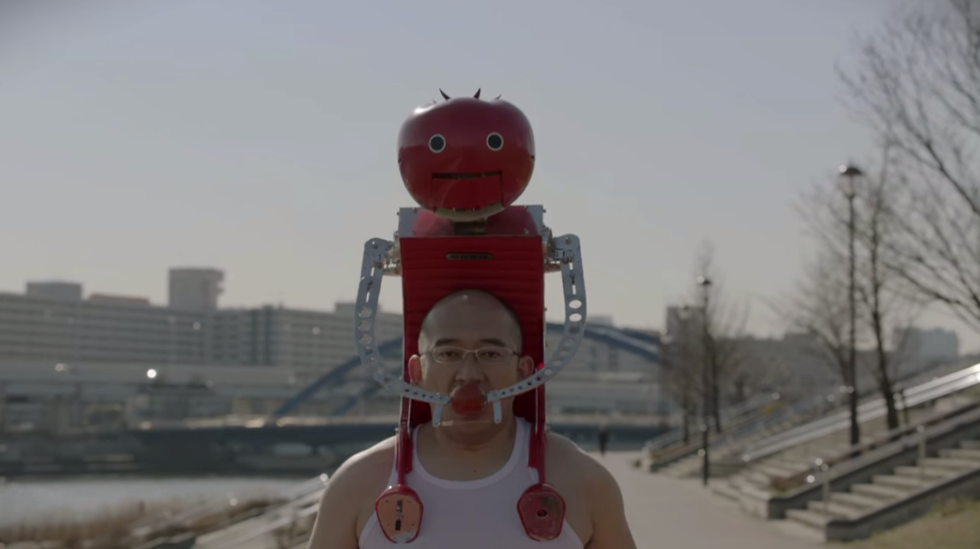 Japanese ketchup company Kagome is trying to make tomatoes the next “it” thing for distance runners. This past weekend at the Tokyo Marathon, the company, in conjunction with kooky design firm Maywa Denki, debuted Tomatan, an 18 pound humanoid robot that perches on the shoulders of runners and feeds them whole tomatoes as they go.

At the official reveal last Thursday, representatives demonstrated the cute contraption. With a swift flick of a lever located on Tomatan’s foot, the robot arms move to catch one of the six tomatoes it’s loaded with. The arms then move over his head and hold the fruit in front of the runner’s mouth.

According to the Wall Street Journal, the idea for the wearable tomato dispensing robot originated when a developer decided that bananas could easily be replaced as the runner’s go-to snack. The company believes that the plump, red fruit’s beta-carotene, citric and amino acids make it just as healthful for marathoners in need of a boost.

Despite all the fanfare, and a turn on the shoulders of Kagome employee Shingenori Susuki during a three mile fun run this past weekend, the 18 pound Tomatan took a backseat during the actual marathon. Instead, the company sent an employee to run equipped with a lighter 6.6 pound version, the “Petit Tomatan.”

While Tomatan and Petit-Tomatan are a one-off project for now, all of the attention they’ve been getting may very well encourage its creators to persist with the project. My suggestion? The Chipatan, for gamers who don’t want to reach for the bowl. Or marketing Tomatan to Spain’s more hardcore Tomatina revelers.