Donald Trump made a lot of horrifying claims about ‘late-term abortion.’ They aren’t true.

It’s important for people to benhonest when speaking about health issues. 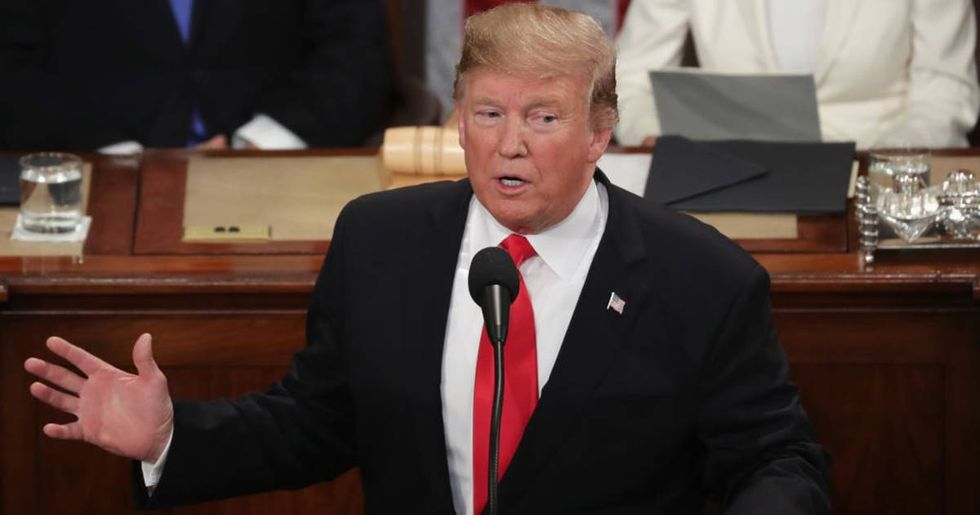 Abortion is an emotionally-charged issue that involves gender, religion, civil liberties, morality and a person’s freedom to make their own health decisions without interference from the state. So it’s important that when people make up their minds about this complex topic, they do so with the appropriate facts.

Regardless of one’s opinion of President Trump, the facts show that he’s willing to lie about nearly everything. He has even made a series of fact-free comments about health that can put people in serious danger.

I am being proven right about massive vaccinations—the doctors lied. Save our children & their future.

In his 2019 State of the Union address, Trump made a slew of gruesome, untrue statements about “late term abortion.” For starters, these abortions only occur in extremely rare circumstances in which the life of the mother is in serious danger and/or the fetus is seriously malformed or cannot survive outside the womb.

Trump comments on the priority to "lower the cost of healthcare and prescription drugs, and to protect patients with preexisting conditions." #SOTU https://t.co/jSA9jEnxu4 pic.twitter.com/Jsgbd3fQsp

Gynecologist Dr. Jennifer Gunter says these abortions never occur because the mother decided to terminate her pregnancy on a whim. They are all serious, life-or-death procedures that are medically indicated.

“This does not mean that ladies who just forgot their eight-week abortion who are now struggling to fit into their pants can get their better-late-than-never abortion,” she wrote in reference to New York’s new law that allows — in rare circumstances — abortions after 24 weeks. “It means doctors can do the right thing medically if the situation arises.”

FACT: According to the Centers for Disease Control, in 2015 (the most recent year for which data was available), 638,169 legal abortions were reported, 91% were performed at or before 13 weeks of pregnancy, 7.6% were performed between 14 and 20 weeks, and just 1.3% were performed at 21 weeks or later. Abortions after 24 weeks comprise less than 1% of all abortions.

TRUMP: “Lawmakers in New York cheered with delight upon the passage of legislation that would allow a baby to be ripped from the mother’s womb moments from birth.”

FACT: New York’s Reproductive Health Act, signed into law earlier this year, allows abortions if “the patient is within twenty-four weeks from the commencement of pregnancy, or there is an absence of fetal viability, or the abortion is necessary to protect the patient’s life or health.”

So abortions after 24 weeks are only allowed if the fetus will not survive birth or if mother’s health is in serious jeopardy.

Trump also plays loose with the facts by painting the grizzly image of a baby being “ripped out of the womb” moments from birth. It paints a nasty, untrue picture of healthcare professionals and women who are faced with this terrible medical decision.

TRUMP: Virginia governor Ralph Northam “stated he would execute a baby after birth.”

FACT: The governor of Virginia never said he would personally commit infanticide. He was addressing a hypothetical question about an extremely-rare circumstance in which a child is born during an attempted abortion. “The infant would be resuscitated if that’s what the mother and the family desired,” he said, “and then a discussion would ensue between the physicians and the mother.”

TRUMP: “I am asking the Congress to pass legislation to prohibit the late-term abortion of children who can feel pain in the mother’s womb”

FACT: This is a misleading claim, because if Trump’s aim is to prevent pain, banning abortions in the later terms of a pregnancy will only exacerbate it for both the mother and her fetus.

Abortions that occur later in pregnancy always involve a mother whose health is in serious jeopardy and/or a fetus that will not survive or has significant “lethal” malformations such as heart or lung defects, or genetic issues which cannot be treated.

TRUMP: “All children — born and unborn — are made in the holy image of God.”

FACT: Science has yet to conclude that there is a god so there is no way to be certain what its “holy image” may be. But we do know that the First Amendment to the U.S. Constitution states: “Congress shall make no law respecting an establishment of religion, or prohibiting the free exercise thereof.”