Fox News accused Ilhan Omar of a “profanity-laced attack on Trump”—the only profanity being his own words.

You can't make this stuff up. 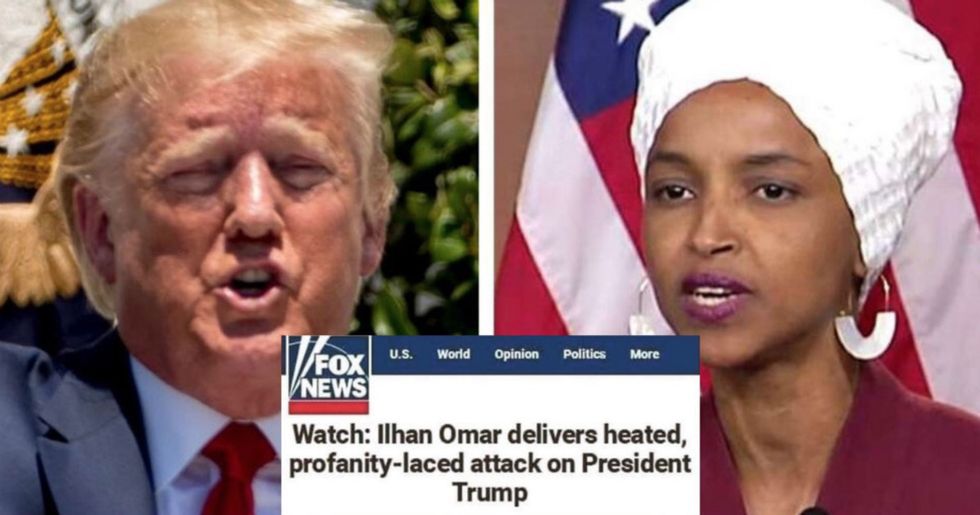 I'm losing track of how many times I've said, "You can't make this stuff up," but here's one more to add to the list.

The problem? The only profanity in the entire "attack" was the president's own freaking words, quoted from his own freaking mouth and tweets.

Someone must have pointed out the obvious, because Fox News has quietly updated the headline, which now reads "Watch: Ilhan Omar uses president's words to deliver heated, profanity-laced attack on Trump." But it's not like adding "uses president's words" in that spot clarifies that the only profanit were president's own words.

(BTW, you can still find the previous headline cached in a Google search—see screenshots below—or on Way Back Time Machine. See how everything lives on the Internet, kids?)

Want to know what an actual profanity-laced attack on the president would look like? This: "President Trump is an a**shole who knows precisely jack sh*t about government and wouldn't know human decency if it hit him in the f**king face." If someone said something like that, a news outlet could justifiably call it a "profanity-laced attack."

But nothing even close to that happened. In a response to Trump's attacks against her and her colleagues, Omar didn't use a single swear word that was not a direct quote from the president. Here's the "profanity-laden" part of what she said:

All the president's actual words. Receipts here, here, and here.

Now, we all know that most media outlets have some bias, and some have more than others. It's no big secret that Fox News is in the business of making progressive lawmakers look bad. But this is more than a bit of bias—it's a blatantly dishonest headline and designed to mislead an ignorant audience.

The unfortunate truth is that most people don't read past the headlines of articles. (I guarantee there will be people commenting on this very post on Facebook without reading it first. Happens every time.) So when a headline is that misleading, it's a problem. I wouldn't even call it "clickbait," as most Fox News followers won't click to read the whole story—they will simply read the headline, imagine Omar spewing her own profanities at the president, and feel righteously justified in calling her evil. Even though that didn't happen.

There's no excuse for this. Someone quoting a person's own expletives is not a "profanity-laced attack" on them. Not in any universe—even the one in which people believe Fox News is "fair and balanced."

Honestly, I'm not sure how The Onion even stays in business anymore. The truth has truly become stranger than fiction.