A confused Trump wanted to know why George Washington didn’t name Mount Vernon after himself.

"You've got to put your name on stuff or no one remembers you." 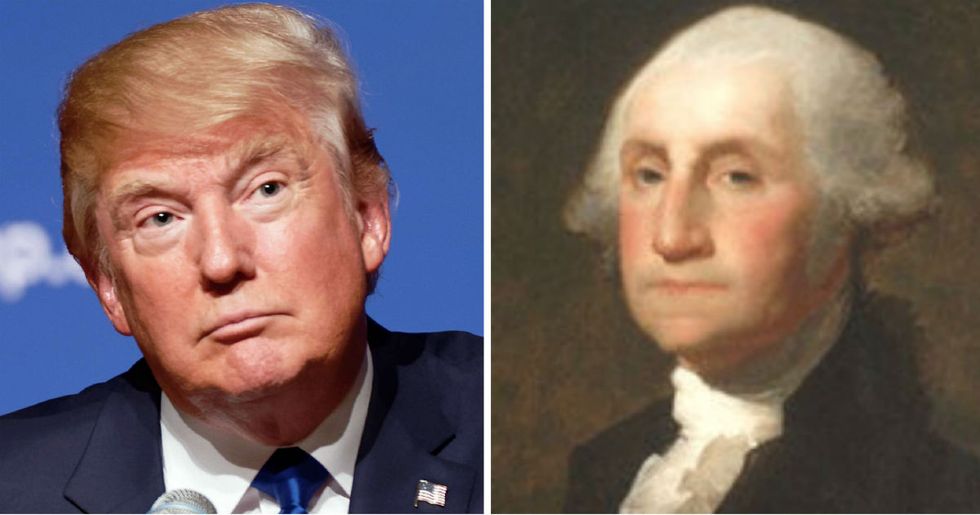 A story has surfaced about Trump’s relationship with America’s first president that is both almost unbelievable and entirely believable at the same time. According to Politico, when Emmanuel Marcron visited the United States in 2018, Trump took him on a tour of Mount Vernon, the former estate of George Washington.

During their tour of the estate, a very confused Trump reportedly wondered why Washington hadn’t named his estate after himself.

“If he was smart, he would’ve put his name on it,” Trump reportedly said, according to Politico. “You’ve got to put your name on stuff or no one remembers you.”

Needless to say, George Washington’s legacy is doing just fine. As the Washington Post reported, the entire nation’s capital is named after him, there’s a nearby university bearing his name, he’s on Mount Rushmore and he’s consistently named as America’s greatest president in poll after poll. Of course, unlike Trump’s eponymous legacy, Washington’s honors were bestowed upon him by others. That alone may be the single greatest defining difference between a man who refused to be king and someone who desperately aligns himself with dictators and tyrants around the globe.

And when you look at each man’s signature piece of real estate, which one do you think will stand the test of time as a testament to America’s accomplishments?

As Politico pointed out, there was one part of the tour that fully captured Trump’s attention: When Macron pointed out that Washington was, much like Trump himself, a real estate mogul of sorts. Trump reportedly responded by critiquing the layout of Washington’s home and wondering just how rich Washington really was. The richest president in history it turns out, far eclipsing Trump in adjusted income.

Maybe that’s part of why virtually every other president has been fascinated by the legacy of Washington, studying his rise to power, decision making, and humility. After all, his abundance of power and eventual insistence on relinquishing absolute power once his time in office was done have proven even more consequential than his military victories. To that end, Politico pointed to a quote from George W. Bush on Washington’s legacy that is perfectly on point for those who wonder what kind of impact Trump’s presidency is having not only now, but on our nation’s trajectory for years to come:

“Honoring George Washington's life requires us to remember the many challenges that he overcame, and the fact that American history would have turned out very differently without his steady leadership,” Bush said.