They joined women on the streets to say, “It doesn’t matter what she was wearing.” 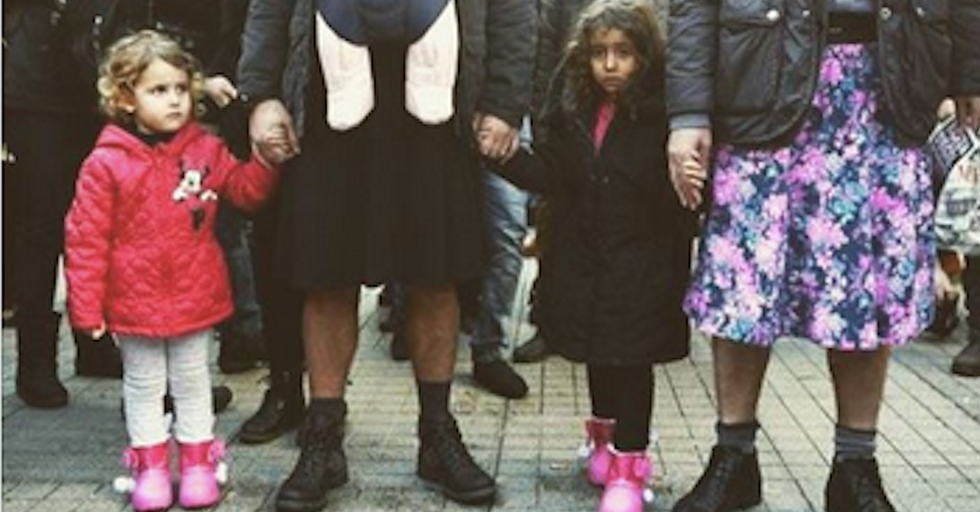 The death of Özgecan Aslan in Southern Turkey has rallied women activists around the country in protests against sexual violence and assault. Their male allies, too, have joined them in the movement, marching alongside them in skirts.

The action is a response to the rhetoric of rape culture, which assumes women provoke sexual assaults by wearing revealing clothes. Aslan was murdered by a bus driver who tried to rape her. When she resisted his assault, he killed her, burned her body, and cut off her hands so she couldn’t be identified. This past week, Turks, outraged by Aslan’s murder, have been using the hashtag #OzgecanAslan to speak out against sexual violence. Under another popular protest hashtag, #sendeanlat, which means, “Tell Your Story”, Turkish women have been recounting their own personal stories of sexual assault.

This time around, male allies have been organizing online with the hashtag #ozgecanicinminietekgiy, which means, “Wear a Skirt for Özgecan”. The men have been posting photos of themselves wearing short skirts and protesting with women activists, demanding justice for victims of sexual violence.

“The women's movement is trying to tell society: 'My dress is not an excuse for your rape or sexual harassment.' But society didn't want to hear these voices,” Turkish activist Hulya Gulbahar told CNN. "People try to find excuses for rapes and killings. But they didn't find any in this case, because Aslan was very innocent, purely innocent. The protest shows that a short skirt is not an excuse for rape."

Two years ago, Turkish men also donned high heels in support of women’s rights on the annual Women’s Day. Although the symbolic gesture brought awareness of the plight of Turkish women, fighting sexual violence requires structural changes and insitutional reforms. Ultimately, it’s an act that draws attention away from the female victims of sexual assault and violence.