20 things you didn't realize you were doing because of childhood emotional abuse.

Experiencing emotional abuse growing up can have a lasting impact on an individual and we need to talk about it. 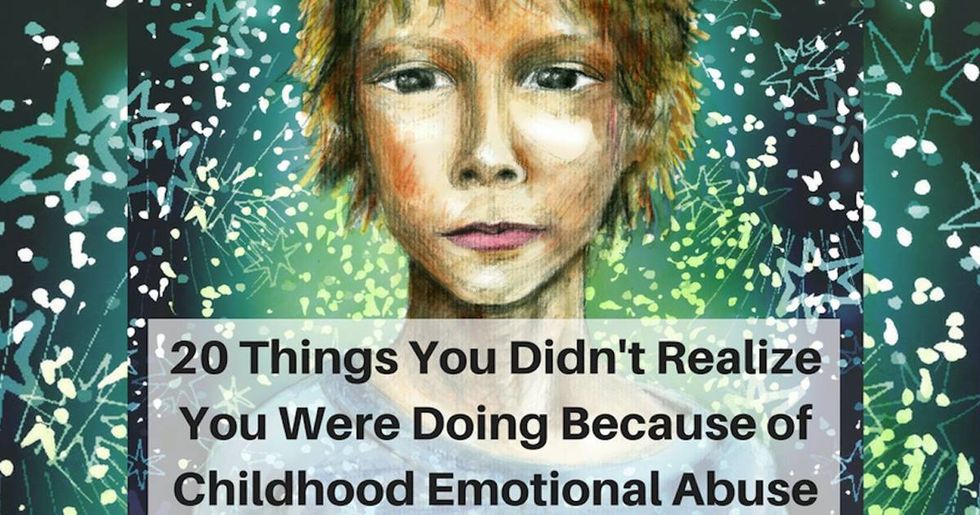 It’s been said before that childhood emotional abuse is “invisible” because it doesn’t leave physical traces. But what we may not realize is experiencing emotional abuse growing up can have a lasting impact on an individual — and we need to talk about it.

Unfortunately, the effects of childhood emotional abuse don’t stay confined to childhood. Oftentimes, the effects extend into adolescence and adulthood — affecting self-image, worldview and relationships. Many people who experienced traumatic childhood experiences may even struggle with their mental health as a result.

Our partners at The Mighty wanted to know what effects childhood emotional abuse could have on a person, so they asked their mental health community to share things they didn’t realize they were doing because of emotional abuse they experienced growing up.

Here’s what they shared:

1. “Apologizing for other people’s behavior, making excuses for them or trying to build a logical reason for why they behave the way they do. I take blame for things that aren’t my fault. My parents would ridicule me and it’s left me with a severe social anxiety where I’m actually scared of people. I have an irrational fear of people staring or judging me. The worst thing for me is being embarrassed. I was bullied so much at home that being embarrassed in front of someone can eat me up inside for days, weeks, months. I have zero confidence in myself.” — Josephine J.

2. “Overthinking. I overthink everything, and analyze your every word, every movement. I have to think of all the possibilities so I am prepared because I never felt prepared when I was younger… I was always the victim. Never again.” — Julie J.

3. “I put tons of pressure on myself then fall to pieces when I cannot handle the unbearable load. I think I am supposed to be perfect even though I can’t be. I cannot deal with people verbally fighting. If they do, I will panic and get sick until I leave the situation. If too many things have gone wrong recently, I feel the need to self sabotage and will hurt myself in some way. It’s sad really.” — Shonda P.

4. “Downplaying my own problems/struggles because I feel the need to help and ‘fix’ everyone else, and convincing myself my problems aren’t as bad/important.” — Angela V.

5. “Bottling up everything and never really asking for help because I feel like a liability. When I talk to somebody and they interrupt me to start talking and afterwards ask me what I was busy saying, I say, ‘I can’t remember’ in order to downplay how much it actually hurt me. [It] makes me feel uninteresting because they didn’t let me finish talking in the first place… and as a result, I don’t really talk a lot in real life.. “ — Gerad S.

6. “Apologizing all the time. Being scared to do things because I feel like no matter how hard I try, I’ll get it wrong or disappoint someone.” — Laurie B.

7. “Now, as an adult, I realized a lot of my anger comes from having anger and abuse directed towards me as a child.” — Andrea V.

8. “Acting all big and tough, pretending like I don’t have a problem in the world. When I act big and tough, it almost tricks my own mind into thinking I am big and tough and that past that held my emotional abuse just never happened. But at night, I return back to reality and become extremely depressed knowing no one in the world will ever know the truth about me.” — Emily E.

9. “Flinching when people touch me or when they scream. As a kid I would hide, as an adult I just leave. I also count things. It’s a small movement like touching the tips of each finger on my right hand and blinking to coincide. Its an obsessive trait. OCD. The pattern has become consuming but it makes me feel at home.” — Kaytlyn K.

10. “[I] make fun of my own emotions, call myself names when I’m acting emotional, blame myself, constantly apologize, panic when being yelled at, get upset and cry when confronted about confrontation, keep things like emotions to myself [and] have panic attacks when I hear people arguing in screaming matches.” — Riley M.

11. “I’m so afraid of my loved ones dying. It’s turned into an obsession. I’m scared they’re all going leave me and I’m going to be alone. I push new people away before they have the opportunity to leave. I care about my close family so much that I put them all before myself. It’s mentally and physically exhausting.” — Ashley G.

13. “If I make a decision, even a small decision [like] switching toothpaste brands, I panic because I don’t know if I’m making the right decision because I was conditioned to never trust myself. Everything was always up to them.” — Evita R.

14. “When people raise their voice at me, I automatically shut down. In a bad way. [I’m] full of anger most of the time because it’s a trigger.” — Ana F.

15. “Being too careful and reserved when I meet new people, which makes them think I’m either not interested or even arrogant. Or being way too active when meeting new people, so they won’t realize I’m anxious.” — Marisa N.

16. “I immediately cave in any confrontation. As soon as a voice is raised, I lose all sense of confidence or backbone — like I’m being backed into a corner.” — Quinn M.

17. “Over-explain myself and talk really fast because I was always talked over and ridiculed for everything I said. I also flinch when my shoulders are touched, and lose my cool when yelled at by men.” — Latasha T.

18. “Living my life being nearly unbearably lonely because I’ve found acceptance from so few and ridicule and betrayal from so many. I continue to work on accepting being lonely gracefully, but am in fact most of the time just trying to hide how lonely and hurt I am to be excluded.” — Deb K.

19. “Silence. As a kid, I learned that speaking up about how I was feeling would only lead to more pain. As an adult, I struggle to communicate my feelings because I’m always afraid I will be dismissed, attacked or ignored. Better to suffer in silence and let everyone think I’m OK than give anyone another chance to hurt me.” — Robi K.

20. “I’m terrified of authority figures. I’m always worried I’m ‘in trouble’ for just existing. I’m an adult, and a tertiary-educated professional. I don’t get ‘in trouble.’ But the minute I have to talk to a manager at work, I feel like a naughty little kid trying to avoid getting grounded.” — Sarah K.

If you or a loved one is affected by domestic violence or emotional abuse and need help, call The National Domestic Violence Hotline at 1-800-799-7233.