The UK just banned sexist ads. It could change the way an entire generation of girls learns to see themselves.

Commercials that use gender stereotypes likely to cause harm are now banned in the United Kingdom. 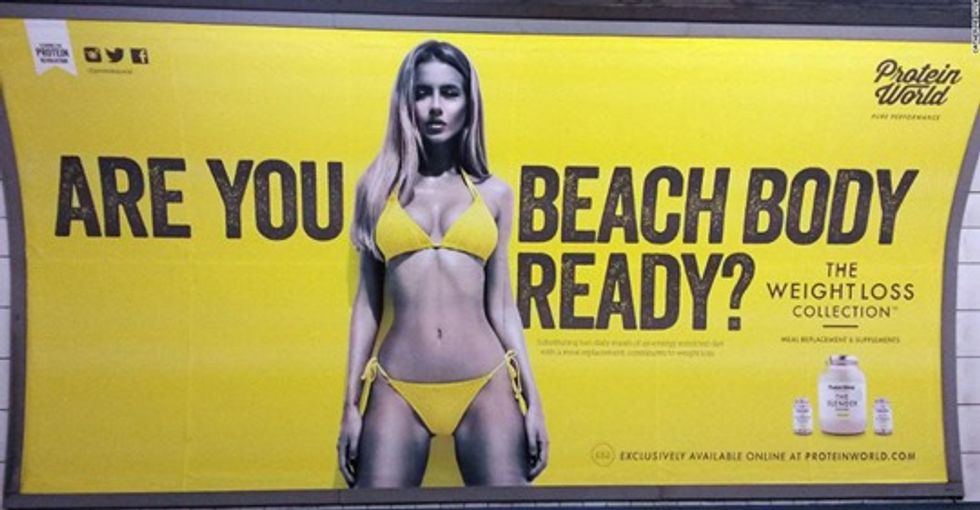 Are you beach body ready? That’s a question that you can ask yourself, but advertisements in the U.K. cannot – even if they really want you to buy their diet product.

The U.K. passed a ban on sexism in advertisements last December, and as of Friday, the ban has finally gone into place. The U.K. Advertising Standards Authority now officially forbids ads that depict gender in ways "that are likely to cause harm, or serious or widespread offense."

Advertisements influence people, and that influence goes beyond whether or not we purchase longer-lasting lip gloss or weight loss shakes. "Our evidence shows how harmful gender stereotypes in ads can contribute to inequality in society, with costs for all of us," Guy Parker, Chief Executive of the Advertising Standards Authority, said. "Put simply, we found that some portrayals in ads can, over time, play a part in limiting people's potential. It's in the interests of women and men, our economy and society that advertisers steer clear of these outdated portrayals.” This is a far cry from the “be the best possible you” messages ads like to feed us.

A 2016 report from Lloyds Banking Group examined the way women are portrayed in ads, and found that only one-third of the people shown in ads were women. Additionally, they were less likely to hold a position of power in the ads. If they were shown being in charge, the “role was often linked to seduction, beauty or motherhood.” Hopefully, we’ll start to see more women in ads that aren’t for makeup and clothes.

Some of the things that are now out of ads are:

“An ad that depicts a man with his feet up and family members creating a mess around a home while a woman is solely responsible for cleaning up the mess.”

“An ad aimed at new mums which suggests that looking attractive or keeping a home pristine is a priority over other factors such as their emotional wellbeing.”

“An ad that belittles a man for carrying out stereotypically ‘female’ roles or tasks.”

The ban impacts broadcast, online, and print advertisements. The Advertising Standards Authority will determine if an ad breaks the new rule or not on a case-by-case basis.

More and more countries are rolling out laws that prevent gender discrimination in advertisements. In Norway, sexism in advertising has been forbidden since 1978. And in 2004, Spain rolled out a law banning degrading images of women’s bodies. Belgium, France, Finland, Greece, South Africa, and India all also have restrictions when it comes to sexism in ads. Bravo!

Changing the way we present women in advertisements can help change the way we look at women in real life, and we’re here for it. The real way hair dryers and washing machines can revolutionize a woman’s life is by not talking down to her.