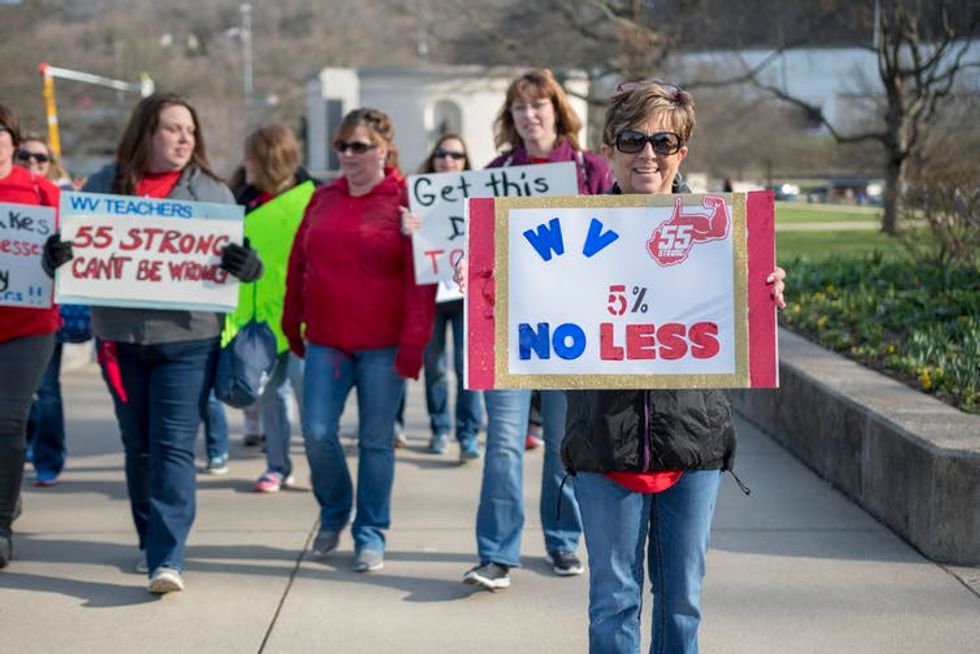 A teacher holds a sign at a teacher rally at the West Virginia Capitol. Photo by Tyler Evert/AP.

The teachers’ strike in West Virginia brought a lot of attention to the disparity in compensation for educators.

The longest teacher strike in West Virginia history came to an end when Gov. Jim Justice announced a deal on March 6, 2018, to grant the teachers 5% more in pay, but issues of pay disparities for rural teachers still persist.

If those issues are not resolved, we could see rural teachers in other states follow the example of the striking teachers in West Virginia, where over half of all schools are considered rural. I make this observation as one who has specialized in the study of rural education.

While the dramatic display of power by teachers in West Virginia was about better compensation, the reality is that the issue of teacher pay for rural teachers is complex.

In West Virginia — where the average teacher salary of $45,622 is the third lowest in the nation — the state legislature sets a general pay scale. The 5% raise that teachers won by way of their strike will apply to that scale.

Wealthier districts within the state can supplement this salary, making their districts more competitive than neighboring ones. In West Virginia, counties experiencing population and economic growth, particularly near the District of Columbia, are able to raise their salaries to more competitive rates than the rest of the state. On the other hand, in isolated and poverty-stricken McDowell County — the poorest county in West Virginia — the district struggles to find teachers, particularly in hard-to-staff subjects like math and special education.

The situation is similar in North Carolina, where wealthier districts located in urban and suburban areas poach experienced teachers from less affluent rural districts. Like West Virginia, this has exacerbated the state’s rural teacher shortage.

Big disparities in other states, too

In the state of Pennsylvania, for example, schools are managed at the local level instead of at the county level, and rely on smaller community districts to set and maintain teacher salary scales.

Salary inequities across Pennsylvania are striking.

Lower Merion School District, located in the wealthy Philadelphia suburbs, has one of the highest average teacher salary in the state at $97,480. Compare that to Turkeyfoot Valley Area School District, a small, rural district located in southwestern Pennsylvania, where the average teacher salary is $36,709. Highly dependent on local tax revenue, rural school systems in Pennsylvania find themselves unable to compete with urban and suburban districts in terms of teacher pay – not just across the state, but within their own counties.

Unlike countywide systems, poor, rural community school districts in Pennsylvania see no benefits from economic growth in neighboring districts within their county borders. Such disparities in pay across and within states intensify a historical problem of teacher recruitment and retention in rural places. While the cost of housing tends to be cheaper in rural locations, teachers may end up having to commute to where they work because of the lack of suitable housing options in those locations.

A 2003 study by the Rural School and Community Trust argued that rural districts faced “a threefold disadvantage” related to the national teacher shortage: lower compensation compared to other rural professionals, such as registered nurses and computer programmers; salary disparities between rural and nonrural states; and within-state inequities between rural and non-rural teachers.

15 years after this study, these problematic trends continue, with devastating consequences. The teacher shortage has now reached crisis levels across many states, such as Oklahoma and Arizona, and is especially pernicious in rural school systems.

An issue for states to handle

States control the level of equity between rural and non-rural schools within their borders. In my opinion, this means state legislatures must find the political will to commit to raising teacher pay in rural areas.

Numerous states, like West Virginia and Oklahoma, have attempted to deal with the lack of certified teachers through emergency certifications, alternative certification programs, and diminished standards for teacher certification.

Given the success of the West Virginia teachers in winning a 5% pay raise, not just for teachers but for all state employees, other predominantly rural states like Oklahoma and Kentucky may soon follow suit.