The football player made headlines earlier this year after coming out at a school assembly. 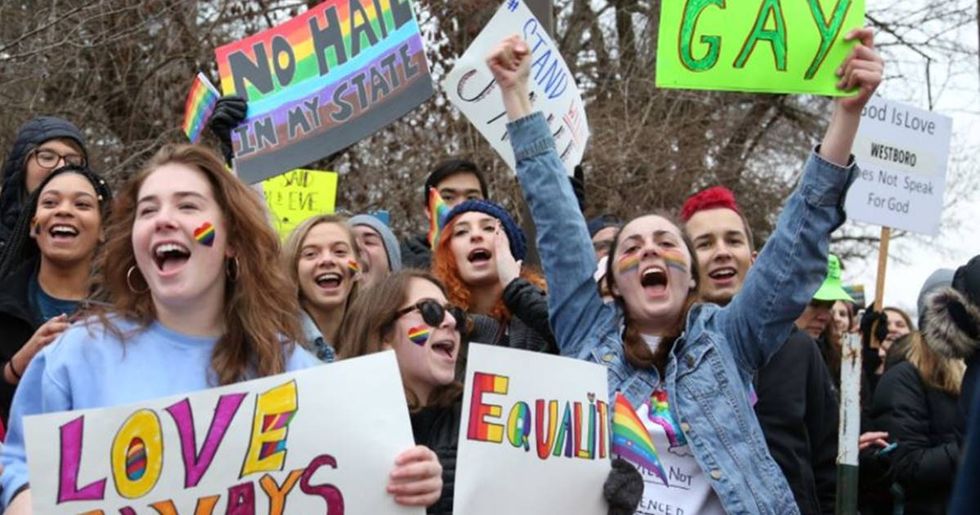 A huge crowd came out to support a gay football player being harassed by the Westboro Baptist Church.

Jake Bain, a star running back and senior at John Burroughs School in Ladue, Missouri, has gone through a lot to earn his football scholarship to Indiana State University. He made headlines last year after announcing he’s gay at a school assembly for National Coming Out Day.

“My main reason for coming out was not necessarily for me,” he told local NBC affiliate KSDK. “For me, it was to try and reach out to people who aren’t comfortable coming out. I feel like, especially within athletics, there’s a stigma. I don’t think being an athlete and gay really collide.”

After coming out as gay, he received public support from his classmates and community, while also enduring hateful, anonymous text bullying. He also became the target of gay slurs on the football field.

Only a few months before he would be going off to college, Bain became the target of homophobia once again.

The Westboro Baptist Church — a hate group known for protesting military funerals with loudly-colored “God Hates Fags” signs — targeted the teen in a press release calling him a “smirking, proud fag child … who declares his sin as Sodom and hides it not (Isaiah 3:9) and is therefore roundly applauded by ‘Merica.”

The group announced it would protest Bain by appearing in front of John Burroughs School on Monday, March 12. So his classmates rallied together to create a counterprotest to drown out the hate group.

The morning of the protest, in a beautiful display of community and inclusivity, the students of John Burroughs School came out in droves alongside Pride St. Louis, reportedly outnumbering the Westboro group by about 10 to 1.

About 100 people came out to #StandWithJake this morning outside John Burroughs School for @Jakebain10 to counter the Westboro anti-gay hate protest. (My pics) pic.twitter.com/paz8LMd3Hg

Our deepest thanks to everyone who came out today, and to the thousands who have supported us and Jake. It was such a beautiful outpouring of love and support. #StandWithJake @Jakebain10 pic.twitter.com/MoeYsTnWjv

Bain was overjoyed by the response but didn’t want to take the spotlight. “There’s so many kids that have to go through the same stuff that I’ve gone through to be able to speak with them and be with them ... just to lead that has been very great,” he told KSDK.

A word from @Jakebain10 to the #STL #LGBT community + supporters and to his @JBSchool family after a huge turnout to #StandWithJake during a Westboro Baptist Church protest pic.twitter.com/YPRA9xr19D