A 12-year-old journalist was threatened by law enforcement for reporting a story, but she knew her rights.

The reporter first caught the public’s attention after reporting on a murder in her neighborhood. 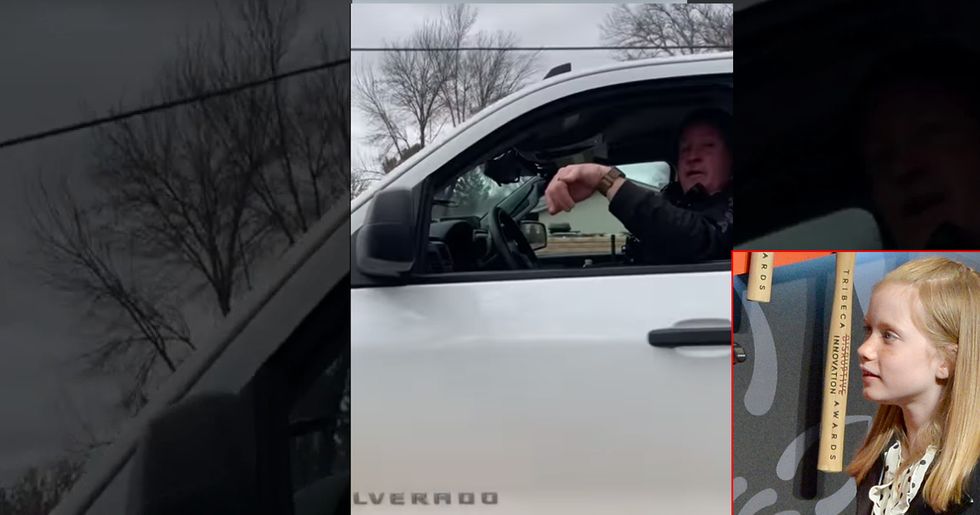 Twelve-year-old journalist Hilde Lysiak is a reporter and the founder of the Orange Street News. She gained national attention at the age of nine after being the first reporter on the scene at a murder in her neighborhood and beating her local paper to the scoop.

Lysiak, the youngest member of the National Society of Professional Journalists, is once again making headlines for standing up for her First Amendment rights after being threatened by an Arizona town marshal.

Lysiak was chasing down a tip near the Mexico-Arizona border when she was approached by Marshal Joseph Patterson who was driving an official vehicle. “I don’t want to hear about any of that freedom of the press stuff,” Patterson said, according to Orange Street News.

A law officer threatened to have me arrested today for doing my job. Luckily, I have it on video: “I don’t want to hear about any of that freedom of the press stuff,” said Patterson.The Marshal continued “I’m going to have you arrested and thrown in juvey. https://t.co/5xgdOA5u8a

Patterson asked for her identification and she provided her name and phone number, adding that she is a reporter.

“I don’t want to hear about any of that freedom of the press stuff,” Patterson told her.

Lysiak then turned on her video camera and asked him to confirm that he threatened to arrest her and explain why. “You stopped me earlier and you said that I can be thrown in juvie. What exactly am I doing that's illegal?” Hilde asked Patterson.

Patterson then lied to Lysiak saying it was against the law to post footage from the incident online.

Patterson then told her not to follow the Marshals because they are entering an area with mountain lions. However, the officer didn’t offer similar warnings to others people in the area. “Yeah, how is that illegal?” Lysiak asked. “I understand that you’re concerned about the safety, but what exactly am I doing?”

Patterson then accused Lysiak of lying to him, by saying she was going to her friend’s house.

After Hilde’s video went viral, the city of Patagonia, Arizona issued a statement about the incident.

“The town of Patagonia has received many comments concerning Marshall Patterson’s interaction with a young reporter from the Orange Street News,” it says. “The matter has been carefully reviewed and we have taken action we believe to be appropriate for the situation. We do not publicly disclose personnel actions including discipline and we will have no further comment on this matter.”

This NowThis video states "Hilde says she was satisfied with the ultimate outcome." I'm not. This isn't over. https://t.co/vyOSm6RnSt