In This Manic Rant, Right-Wing Zealot Alex Jones Made An Incredibly Bizarre Claim About His Teenage Sex Life

On his show, amid a custody battle, Alex Jones made an absurd claim about his sexual conquests by age 16 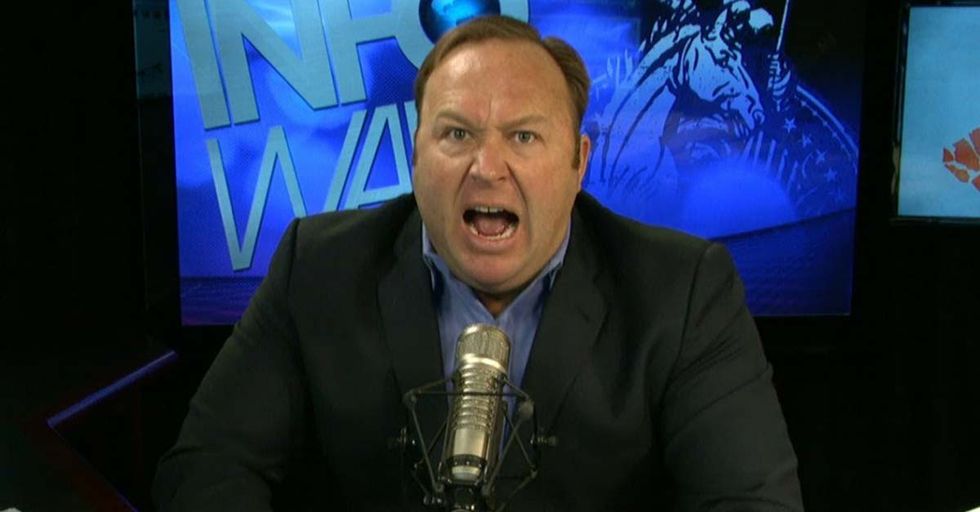 You would think that Alex Jones, embroiled in a heated custody battle with his ex-spouse, would exercise some restraint when publicizing lascivious (and patently false) details about their sex lives. But as we’ve learned in painful fashion over the past year or so, this InfoWars mouthpiece doesn’t adhere to the laws of logic, decency, or decorum.

So while he’s fighting in a court for the right to parent his child, he’s also on television broadcasting information no human of any political affiliation needs or wants to know.

In the video below, posted with the archetypal InfoWars title “Sandy Hook Vampires,” Jones veers way off course into tales of his sexual history, which purportedly includes sleeping with 150 women before he was 16. I’m not sure that any 16-year-old boy has even met 150 women in any capacity, but that’s Alex Jones for you.

Here’s the insane video. I suggest you watch while wearing a blindfold and earplugs.

This video airs at a point in the trial of custody in which Jones testified he was unsure if he was having sex with other women after his fiancé had moved in with him. He’s a little foggy on the timeline, so he asked for a reference tool.

Alex Jones, asked whether, as earlier testified, he was having sex w/ woman after his fiance moved in w/ him: "I'd have to see a calendar."
— jonathantilove (@jonathantilove)1492711961.0

Once again, it’s hard to know what’s proposition is more frightening with people cut from this cloth—that they’re lying … or that they’re not.

We can take some solace in knowing that at least, in the context of his trial, he’s being held to a standard of truth that could wind up with him going to jail if he proves incapable of meeting it.