“We’re going to miss you so much.” 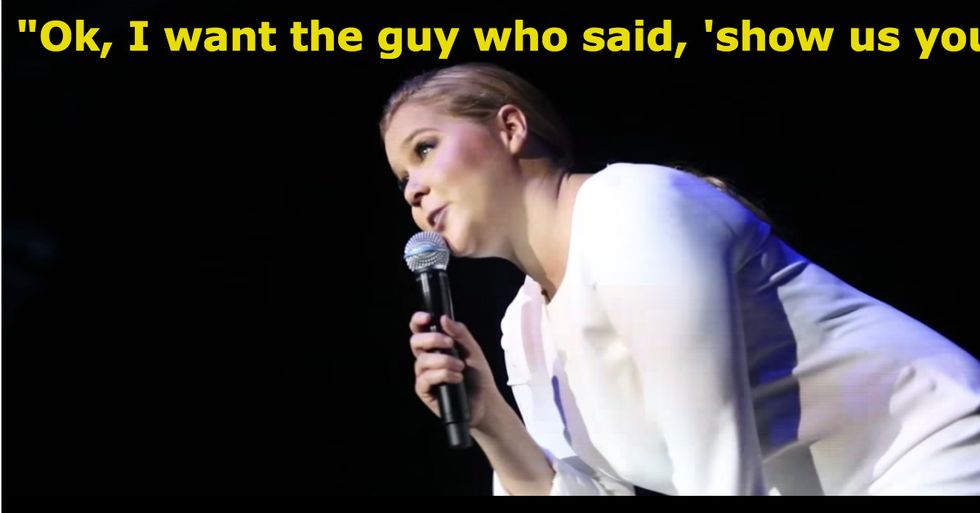 Interrupting an Amy Schumer performance is probably not a good idea. Actually, it’s definitely not a good idea. The hilarious comedian and successful actress first rose to prominence with her epic takedowns of celebrities during Comedy Central roast specials, which left some of the world’s biggest egos humbled in her wake.

But some people have to learn the hard way — becoming a viral sensation in all the wrong ways.

During a recent show in Sweden, one sexist guy in attendance decided to cut into Schumer’s stand-up performance by shouting, “Show us your tits!”

The 35-year-old comedian didn’t miss a beat, immediately pausing her act and saying, “OK, I want the guy who said ‘show us your tits’ to come up here.”

Nearly 5 million people have watched the clip already and with good reason.

At this point, the heckler pathetically tried to hide. But Schumer was having none of it, asking other fans in the crowd to point their fingers at him. Amazingly, Schumer decided to be a good sport about the whole thing. She asked the guy what he does for a living (“sales”) and made a quick joke about that and then called attention to his crude T-shirt. Finally, Schumer let him know where things stood, advising, “That’s really cute but if you yell out again, you’re going to be yelling in the parking lot because you’re going to get thrown out.”

Schumer tried to give the heckler a pass, asking security to let him stay but to “look him in the eye.” Instead, the heckler then almost immediately shouted out again, and the comedian asked security to circle back around and remove him.

“I was about to go anyway,” he shouted, trying desperately to sound cool in the midst of being called out not only by Schumer but also by thousands of her fans surrounding him.

“We’re going to miss you so much,” the comedian joked. She then decided to take the temperature of the audience, saying, “Clap if you think we should throw him out.” The thunderous response left little doubt, any of which was wiped out with the deafening silence when she asked people to cheer if they thought he should be allowed to stay. “We’re going to miss you so much,” she snarked.

And as security escorted the heckler out, Schumer made one other point abundantly clear, saying, “I’ll show my tits when I want to.”