Anti-vaxx mom asks how to protect her daughter from measles outbreak. The internet delivered.

Gee, if there was only a way to protect children from the measles? 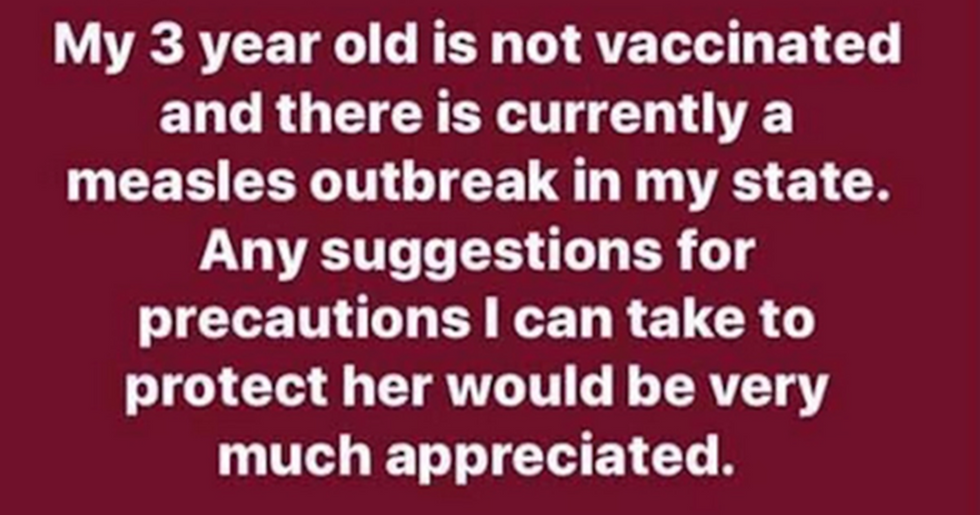 Earlier this year, there was a measles outbreak that started in Washington and has made its way to Oregon, and anti-vaxxers are the sole cause of this retro death threat.

Measles was effectively eradicated in the United States by 2000. Unfortunately, the anti-vaxx propaganda against MMR vaccine has led to a 1.3% rate of non-vaccination. https://t.co/bKJIeJgd6N

Unsurprisingly, the same people who peddled anti-science myths about vaccines causing autism, have also bolstered the idea that vaccines are a personal choice and not a public health responsibility.

However, now that consequences of these choices have spread, anti-vaxx parents are storming their brains for ways to protect their children (this should be the updated dictionary definition of cognitive dissonance).

One anti-vaxx mom’s post went viral after she asked members of the private Facebook group “Vaccine Education Network: Natural Health Anti-Vaxx Community” how to protect her child from measles.

Can anyone guess how this person could protect their child from the measles? pic.twitter.com/l07KClnUWv

The post was quickly screenshotted and spread on Twitter, where people had a myriad of strong-worded responses to the mom.

Essential Oils and Crystals charged under a Full Moon. Duh

A lot of people suggested she employ thoughts and prayers since she's already decided to forgo science.

If only there existed some kind of medicine to protect children from getting such illnesses. A vaccination if you will...

Thoughts and prayers. They work as well with disease as they do with shootings.

Ooh! I know this one!

First you’ve got to find a willow tree. The tree must be at least 47 years old. Then you cut a new branch off the tree. You hang it over the kid’s bed, facing SSE. And (the most important bit) you must hang it with a red ribbon. pic.twitter.com/us9R5nw9DI

Others suggested the best safety precaution was to give her daughter to smarter parents, who wouldn’t create a public health crisis.

Give the child up to some better parents.

Measles is not the biggest threat to your child. A parent who gets their medical advice from Facebook is.

How's this for a precaution? pic.twitter.com/3JGrHEeFn2

Other parents didn’t mince words about how irresponsible and dangerous anti-vaxxers are.

As the father of a three year old, I’d like to offer up a hearty and sincer fuck you to the irresponsible, selfish, and incredibly stupid parents that have caused this measles outbreak.

I have thoughts on this whole measles outbreak

They go something like this: once upon a time, there were no vaccinations & life expectancy was shit. Lots of people died. Horribly.

Now we have vaccines; kids live to adulthood. This is a new phenomenon.

A woman with autism chimed in to point out how absurd it is to put people at danger of death because of stigma against ASD.

Hopefully, this mom changes her values in time to save her child and protect the other children in contact with her daughter. Otherwise, she’s punishing her child for her own ignorance.