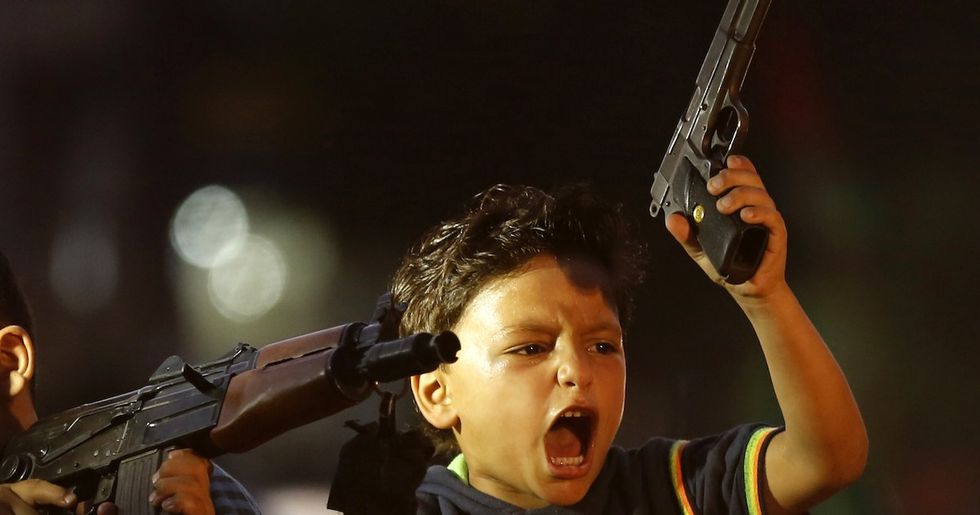 One of the biggest problems with the gun control debate is that so little of it revolves around facts. If lawmakers were serious about public safety, there’s a wealth of knowledge available that can lead them to create effective policy.

But instead of looking for a serious solution to America’s mass shooting epidemic, President Trump simply took a page out of the National Rifle Association’s playbook and suggested that the country should arm as many as 20% of its school teachers.

He even said it with a straight face.

Trump on his plan to arm teachers with concealed weapons: "A security guard doesn't know the children, doesn't love the children... The teachers love their children." pic.twitter.com/YyjzmjYkAh

What’s wrong with Mr. Crabtree coming to homeroom packing heat? According to an FBI study on mass shootings from 2000 to 2013, not a single shooting was stopped by a concealed carry permit holder who was not a security guard, police officer, or active duty military. 21 were stopped by unarmed civilians.

FBI statistics also show that opening fire on a mass shooter is a very dangerous proposition. In 21 of the 45 instances in which a police officer opened fire on the shooter, an officer was shot (28) or died (9).

Studies also suggest that arming 20% of the nation’s 3.2 million school teachers could result in an increase in crime across the board. John J. Donohue III, a Stanford law professor, used more than 30 years of research to determine that right-to-carry laws increase violent crime in states by up to 15% over a 10-year period.

Prevailing logic says that an armed society is a polite society and that fewer people consider committing crimes if they believe that they may be around someone who’s armed. But research shows that non-threatening situations such as road rage and intimate partner violence are much more likely to escalate into deadly encounters when there’s a firearm involved.

Till now, if Mr. Crabtree got cut off in traffic and didn’t have a gun, there was little chance he’d kill the other motorist. But now that he has his school-issued Glock in his glove compartment, all bets are off. The same logic applies to scuffles in a classroom, whether between students or with a teacher (or security guards or police). A run-of-the-mill fistfight now has a much greater chance of becoming deadly.

Arming 20% of the nation’s school teachers would also put over 600,000 more guns into circulation. Research shows that people who routinely carry guns outside the home are at least three times as likely to have one stolen. So arming teachers would, in turn, increase the number of illegally owned guns in circulation.

A sound, evidence-based policy would disarm shooters, not arm teachers. While banning assault rifles wouldn’t end the grisly mass-shooting phenomenon altogether, the assault weapons ban that was in place from 1994 to 2004 proved to be effective at lowering the number of massacres.

Just to follow up on my previous tweet, here is annual breakdown of lives lost in gun massacres (mass shootings claiming 6+ lives) from 1966-2015 (50 years). From 1994-1998 (roughly the first half of assault weapons ban's duration), not a single life was lost in a gun massacre. pic.twitter.com/rAf0SPAMCF

The best way for the U.S. to tackle the mass shooting epidemic is for our citizens and politicians to be armed — with the proper facts and research to create meaningful gun policies that will save lives.