This Atheist lawmaker stood up to a ‘Christian bully’ in front of the Arizona state legislature. 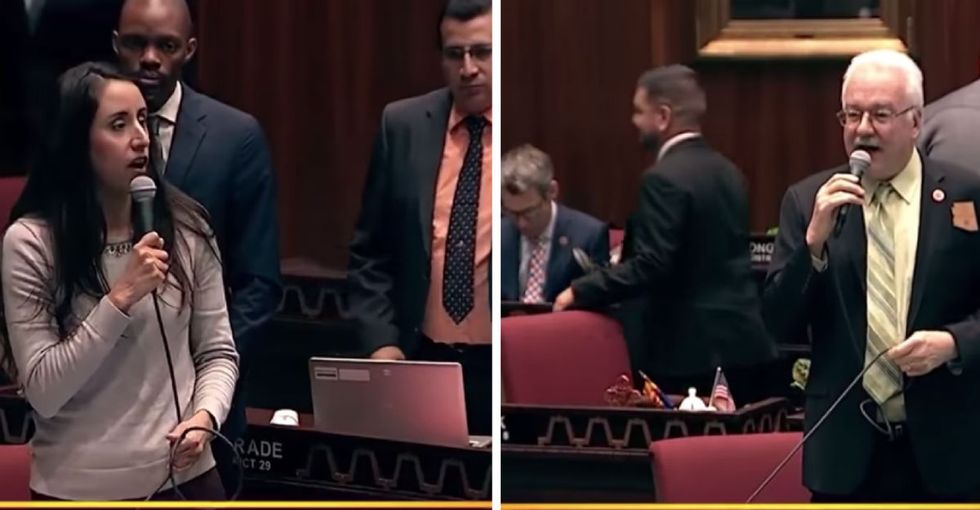 On February 11, Arizona state Rep. Athena Salman (D) gave an invocation on the floor of the state’s House of Representatives. On virtually any other day, this would go without mention. But Salman happens to be an Atheist.

Nonetheless, her invocation would sound uncontroversial to just anyone. Even those of deep faith might hear beauty in her words, describing our humble place in the universe and concluding with: “No matter what we call it, we give thanks to the awe-inspiring power of nature itself.”

However, shortly after her invocation, Rep. Salman was followed by her fellow state Rep. John Kavanagh (R), who used his time to mock Salman’s remarks.

In a bizarre exchange, Kavanaugh paused to introduce his “special guest.” That special guest was “God,” whom Kavanaugh introduced by playing on Salman’s words and insisting that God was in fact in the room and inhabiting all aspects of that tiny speck of dust we call Earth.

Each of their invocations has beauty within the prose when taken out of context. But Kavanaugh’s speech would be out of place if it were attacking any other faith. But because he was mocking Salman’s lack of faith, many in the House chamber saw fit to laugh and applaud his remarks.

Of course, those without a religious practice or faith, might have noted the unintentional irony of Kavanaugh introducing his special guest God, only to be greeted by silence and then some scattered laughter in the halls of the Arizona legislature.

Nonetheless, his actions were at the very least personally disrespectful and unprofessional. But to some legal experts, they have even been unconstitutional and violated state law which prohibits lawmakers from using the power of the government to mock or discredit the values of any individual’s faith, or lack thereof.

The next day Rep. Salman took to the floor again in protest. On the verge of tears, she noted how her mother had been sitting in the hall during her invocation and during Kavanaugh’s “rebuttal.”

“I have never denigrated another member’s invocation. Yet for the third year in a row, members of this body have belittled my religious beliefs in ways that are humiliating and uncalled for,” Salman said.

“We want to applaud Rep. Salman for her courage and determination. Atheists, agnostics, humanists, and nonreligious Americans have every right to serve as lawmakers and be afforded the same recognition and respect as their peers.”

And that just about perfectly captures what happened. Rep. Salman isn’t a hero because she’s an Atheist. But at a time when a record number of American are openly identifying as non-religious, it’s vital that we honor our nation’s core principles and laws, which are there to protect people of all faiths and those who voluntarily choose to have no faith at all.