The #BirdBoxChallenge is so dangerous, Netflix is begging people to stop it immediately.

Netflix’s most popular original movie has inspired some risky behavior. 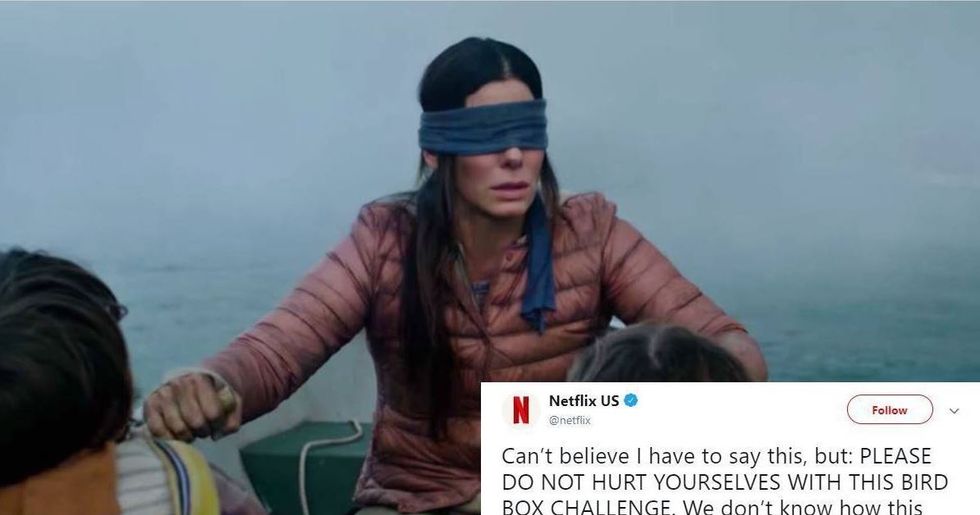 Netflix’s “Bird Box” has quickly become the streaming service’s most popular original movie yet, amassing over 45 million views since being released on December 21, 2018.

The film stars Sandra Bullock as a mother struggling to save her children from a savage demonic force that targets people’s sight. Those who see the demonic force with their eyes will realize their greatest fears.

Netflix’s unique, in-home, on-demand service made the film an immediate pop culture phenomenon. In this day and age, it’s hard to imagine a theatrical release being seen by so many people in just three weeks,

As with anything that captures the zeitgeist, “Bird Box” inspired countless memes on social media. It also launched the #BirdBoxChallenge where people have been attempting to do everyday tasks blindfolded.

In addition to being offensive to the visually challenged, it’s downright dangerous.

Visual impairments and blindness are not a "fun challenge" for you to try out. #ableism#disability#birdbox#birdboxchallenge

So far, it’s inspired countless injuries, like this guy bashing his baby’s face into a wall.

This is an example of why the Bird Box Challenge isn’t a family activity. ??

This dude couldn’t even get past his dogs while wearing a blindfold.

But not all of the videos inspired by the movie have been dangerous.

This mother hilariously recreated the rapids scene with her kids in the tub.

When they hit the rapids: #BirdBoxpic.twitter.com/ANcGG68H2R

Michael Strahan and got into the act by trying the “Bird Box” lipstick challenge with Sara Haines.

The dangerous phenomenon has been so widespread, Netflix issued a statement asking people to be safe.

Can’t believe I have to say this, but: PLEASE DO NOT HURT YOURSELVES WITH THIS BIRD BOX CHALLENGE. We don’t know how this started, and we appreciate the love, but Boy and Girl have just one wish for 2019 and it is that you not end up in the hospital due to memes.

Here’s how people reacted to the warning.

Natural selection. The tide pod eaters have a new game.