Rockers Brand New respond after the man who raised prices for an AIDS drug by 5500 percent is seen wearing their merch. 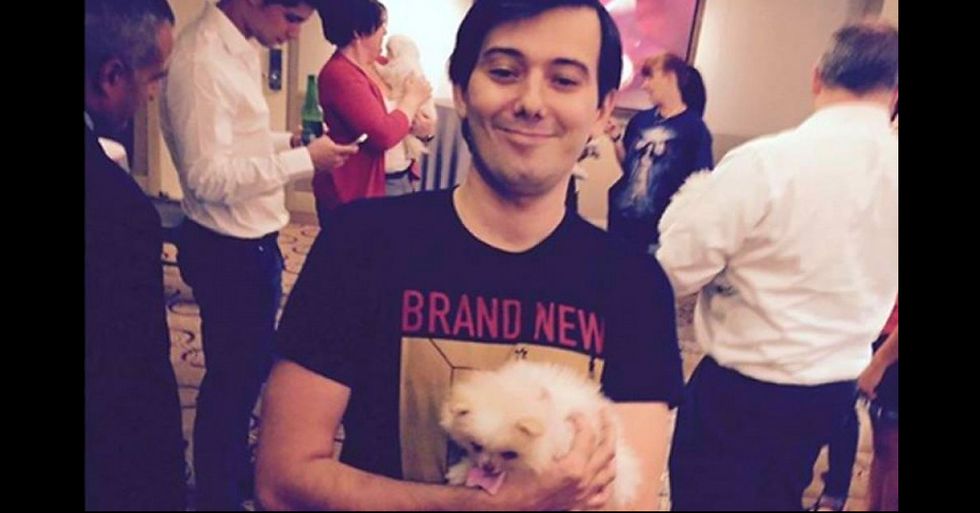 Most people had never heard of Turing Pharmaceuticals until earlier this month, when newly installed CEO Martin Shkreli announced the company would be raising the price of its life-saving drug, Daraprim–commonly used to treat AIDS patients–from $13.50 to $750 for a single tablet. The reaction was swift and unforgiving. Shkreli was labeled “Big Pharma’s Biggest A**Hole,” and an “icon of modern greed.” For a while, the 32 year old venture capitalist seemed eager to embrace his infamy, citing the existing trend toward skyrocketing prices for pre-existing (as opposed to newly released) medication, going so far as to write in a (now unavailable) tweet: “And it seems like the media immediately points a finger at me So I point one back at em, but not the index or pinkie.”

There is, however, another side to Martin Shkreli: The punk rock side.

In addition to regularly tweeting the praises of emo and indie rockers like Pianos Become The Teeth, and Thursday, Shkreli, whose net worth is estimated to be around one hundred million dollars, was outed as a financial backer of Thursday front-man Geoff Rickley’s Collect Records label. In the wake of his Daraprim-fueled media collapse, however, the punk rock community Shkreli so embraced has made a number of public stands against the CEO’s decidedly un-punk corporate actions. Rickley has gone so far as to reject Shkreli’s patronage for Collect Records, writing: “Never in a million years did any of us expect to wake up to the news of the scandal that he is now involved in. It blindsided and upset us on every level. As such, we know it is impossible for us to continue having any ties with him.”

But, while severing ties is one thing, it was emo-punks Brand New who took the opportunity to actively put this scandal to good use. After it was discovered that Shkreli had tweeted pictures of himself wearing that band’s shirt, Brand New took to Facebook last week, announcing that for the next 48-hours, all proceeds from their “Electricity is Dangerous” line of tees would be donated to the Whitman Walker community health center, in Washington D.C.

While Brand New has yet to release any figures regarding how much their offer generated for the health center, it’s a safe bet that, with the post’s thousands of “likes” and hundreds of “shares,” the group was able to help raise a good amount of money.

Shkreli, meanwhile, has pledged to lower the price of Daraprim from his initial five thousand percent mark-up.