And it’s on the cover of Sports Illustrated 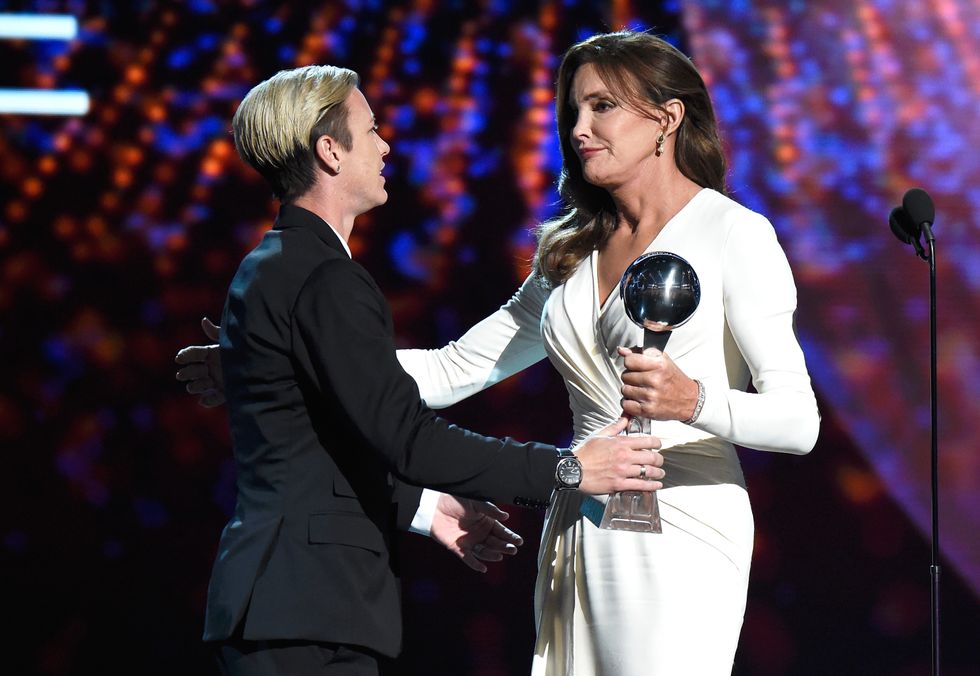 Almost 40 years to the day after Caitlyn Jenner won a gold in the decathlon at the Montreal Olympic Games, she is on the cover of Sports Illustrated once again—wearing her medal in public for the first time she entered the American Hero Pantheon in 1976.

There were rumors that Jenner, now 66, was going to pose naked for the cover shoot, wrapped in the stars and stripes with that Olympic medallion around her neck. But she opted instead for a nude-colored, slightly bedazzled jumpsuit. Surely an under-stated outfit was the correct choice for a cover that is an outsized statement in and of itself.

Jenner talks about the tension she has around the gold medal—which she keeps in a box in a drawer in her bathroom—her thoughts on Bruce, what those 1976 Games mean to her after four decades of reflection, the role that elite training played in allowing her to escape from her internal struggle, and what she hopes to accomplish with her platform as one of the world’s most famous trans people.

Because we’ve seen so much of her over the past year, it’s easy to start taking the fact of Jenner’s public life for granted, but it should not be understated how important it is to see a trans woman and Olympic champion posing on the cover of the country’s biggest sports magazine. It’s unprecedented. The woman living as Bruce Jenner was honored on Wheaties boxes, and now the woman that is Caitlyn, is free to talk about life as a trans person in the pages of Sports Illustrated.

And from an institutional perspective, SI does a fantastic job of treating the trans conversation with sensitivity. As an introduction into the story’s section focusing on the Montreal Olympics, they include this explainer for their language and terminology:

“A word here about pronouns and first names, about which the transgender community is understandably sensitive. Last spring, in the wake of Jenner’s announcing her transition, GLAAD (formerly an acronym for the Gay and Lesbian Alliance against Defamation but now simply the organization’s title, representative of a broader mission that includes transgender people) issued a series of guidelines, including one that Jenner be referred to as Caitlyn or she or her, even in reference to the events of 1976. Most transgender people choose to leave their pretransition life—and name—far behind. Jenner, however, often talks about Bruce. ‘Caitlyn doesn’t mind,’ says Nick Adams, director of programs, transgender media for GLAAD, and a transgender male. ‘She has this world of fame in her past. The fact that it doesn’t grate on her like it does most trans people is unique.’ With Jenner’s approval, in this story, the historical figure who won the gold medal in 1976 is referred to as Bruce and with male pronouns. The woman who lives now as Caitlyn is referenced with female pronouns.”

As the trans community becomes more publicly integrated into the cultural conversation, this kind of attention to detail is essential. It means people in Jenner’s position can tell their stories more effectively and in safe spaces, and it means readers can learn more about the nuances of minority populations that are crucial to reaching true understanding.

Visibility is not representation, but as far as visibility goes, the cover of Sports Illustrated is a pretty good look.