Let’s all party with our neighbors to the north 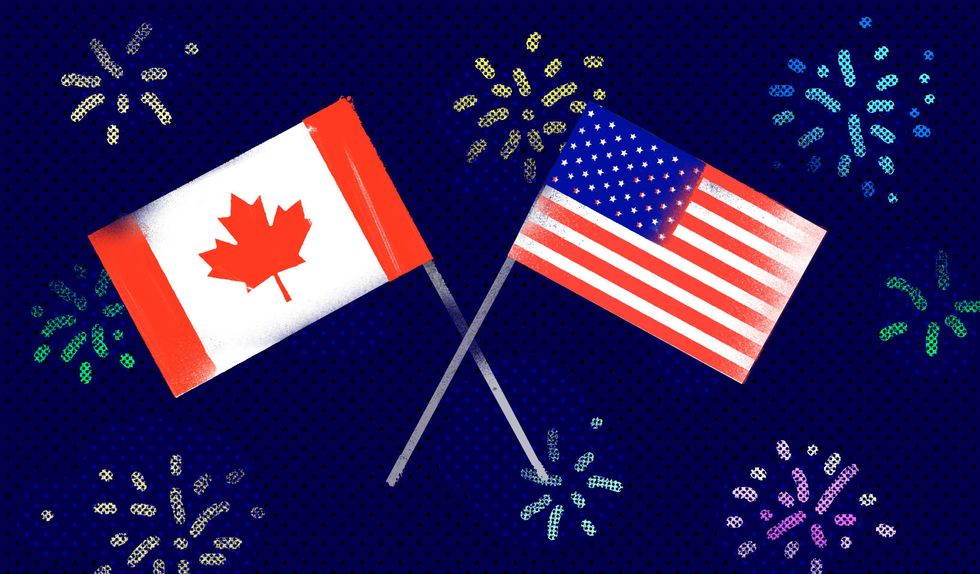 U.S. citizens will be donning Canadian tuxedos left and right this weekend—what says patriotism better than denim on denim?—and Independence Day celebrations have already begun in earnest with pools full of Mentos and Coke.

Meanwhile, our neighbors to the north have humbly been celebrating their own independence (or consolidation, to be more precise) since yesterday. July 1 marks the date the provinces of Nova Scotia, New Brunswick, and Canada were united in 1867.

Canada Day, formerly known as Dominion Day, shares loads of similarities with the Fourth of July: Canadians set off fireworks, grill in parks, and wear red and white (but not always blue). But their holiday also includes human flag aerial photography, buffalo hikes, and tasty snacks to make you stand up and salute. Here’s seven reasons we should hold a cross-border celebration at the beginning of July.

Butter tart and mojitos for dinner. Google’s trending Canada Day recipes are (literally) all over the map: haddock fillet, mashed cauliflower, and lasagna all made the top ten, but the top three make the ideal picnic: chicken drumsticks, mojitos, and butter tart (an individually sized Canadian pastry with butter, syrup, and egg).

Expect some face time with beloved prime minister Justin Trudeau. Potentially the only Canadian prime minister in history with his own Vogue profile, 44-year-old Justin Trudeau spent the days leading up to Canada Day taking selfies with Barack Obama. It’s customary for the dreamy prime minister to make an appearance on Parliament Hill in Ottawa—but not necessarily to dance for the masses in a pair of maple leaf socks.

Canada has its own superhero, and he likes to party. Comic book icon Captain Canuck wears a maple leaf costume and is kind of the laid-back, humbler Captain America. He performs on Canada Day every year but his presence actually has broad significance: The Canadian comic book industry collapsed following World War II, and the Captain Canuck series, which launched in 1975, represents the first post-war success.

Hiking with the world’s largest urban bison herd. We don’t have a whole lot of access to the bison that inspired a generation of literature and film in the western United States, but Canadians have preserved the public’s relationship with the majestic creature: The fine young buffalo in the world’s largest urban bison herd (headcount unavailable) will be celebrating independence day with anyone who cares to hike through their midst (tour guide mandatory).

Canadian Pride, LGBTQ Pride. Though most U.S. pride celebrations wound down at the end of June, Toronto’s parties don’t end until July 3. A rainbow flag has been flying at City Hall since the first of June, and Canada’s first-ever Pride Month keeps the party bumpin’ on Canada Day with the seventh anniversary Trans March. The month culminates with the main event on Sunday: the huge annual pride parade will close down streets for dancing and celebration.

Tough guys abound. Ottawa’s Strongman Competition, held in Trenton, seeks out the burliest man in the entire province. Events include a “Farmers Walk,” a “Car Deadlift,” and a “Rope and Harness Truck Pull.” The event website (which feels like a flashback to 2003), notes the event is gaining traction, fast.

Gnarly traffic is a pan-American concern. In Quebec, Canada Day is overshadowed by a province-wide logistical nightmare: the first of the month marks the end of most apartment leases. Well over a hundred thousand people move each July 1 in Montreal alone, and moving companies are booked up to a year in advance. A 2013 New York Times article describes total chaos: “an armada of moving trucks jockeyed for position with overloaded pickup trucks and trailers reminiscent of ‘The Beverly Hillbillies.’” Let’s commiserate over a mojito, eh?