“One Less Gun” uses bullet-portraits and decommissioned assault rifles to make a powerful statement about violence. 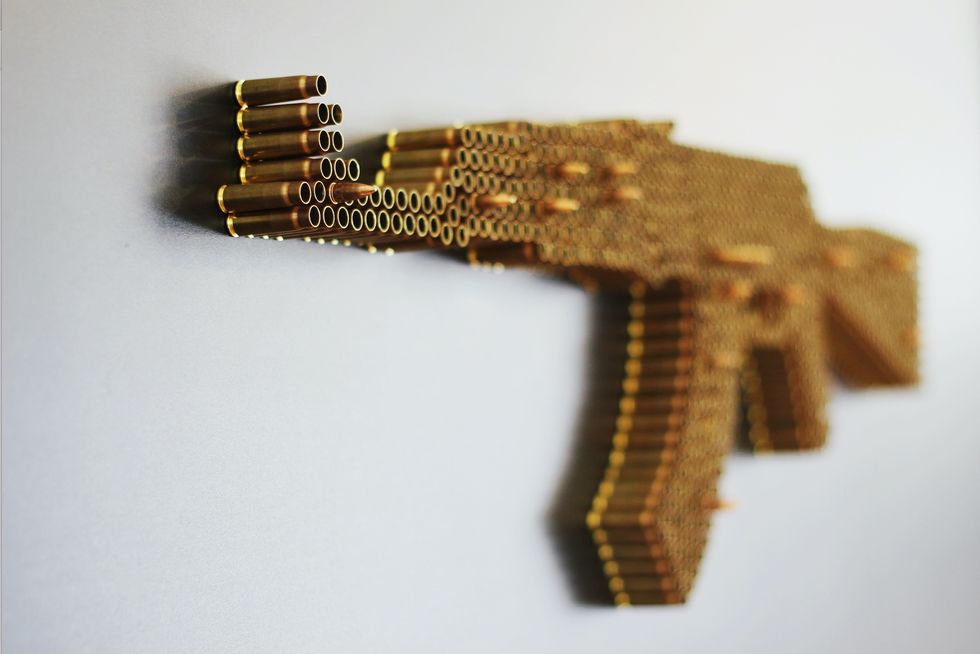 There is a certain chilling ubiquity about gun violence that affects us all. Even those who have never owned, held, or seen a firearm in person are exposed on an alarmingly regular basis to images and stories describing the effects these weapons have on individuals, communities, and countries around the globe. It is that relationship between guns as they exist in the world, and guns as they appear throughout mass media that is at the heart of a new series of works from artist Carl McCrow, which blurs “medium” and “message” to spur conversation on the role–and impact–of firearms in our lives.

“One Less Gun,” open through September 6 at London’s Gallery@Oxo, consists of pieces created entirely out of guns themselves, as well as the ammunition they use. McCrow began exploring the use of weaponry as protest art after a close friend serving in the British armed forces lost multiple limbs while in the line of duty. “The exhibition,” explains a press release from McCrow, “is not about whether you like guns or dislike guns, it’s about the simple fact that there are too many and 1,000 people a day are dying as a result of them. Like it or not, guns are a part of popular culture and are integral to many of our favourite games and films are in all likelihood to remain so for many generations to come.”

The series features canvases made entirely of bullets:

And decommissioned AK47’s, perhaps the world’s most recognizable gun:

“McCrow’s aim is to create a provocative and totally captivating experience that challenges the military machine, its output and devastating impacts.”

In addition to the artwork itself, McCrow is active in the “Gun Neutral” campaign, which works with filmmakers to ensure that, for every firearm shown onscreen in a movie, a real-life weapon will be destroyed in its place. Partnering with McCrow on the effort is none other than legendary director Martin Scorsese, whose upcoming film Tomorrow, which tells the story of a soldier returning home from war in Afghanistan, will launch the initiative.

[via konbini, all images used with permission via Carl McCrow]