Captain America, Chris Evans, hit the nail on the head about the actual reason these men want a straight pride parade. 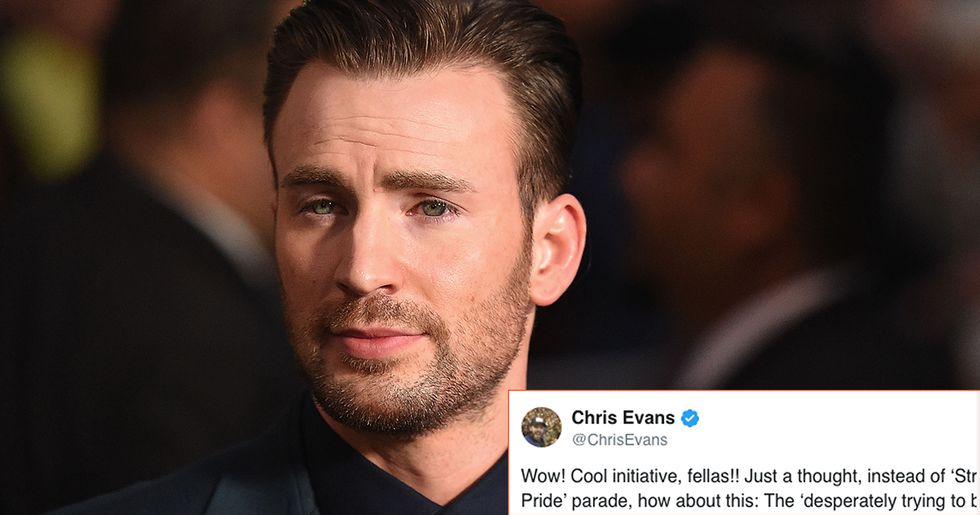 In case you missed it, a group of men in Boston known by the group name Super Happy Fun America is proposing a “Straight Pride Parade” for the end of August, and because they filed a discrimination case (deep irony) for permission to fly their Straight Pride flag, it looks like it may actually happen.

Understandably, everyone and their mother has been roasting the concept and how innately self-pitying and privileged it is.

A handful of celebrities emerged from their golden Hollywood hot tubs to tweet their support of the LGBTQIA community while expressing deep eye rolls at the concept of “Straight Pride.”

One of the most notable of the celebrity clap-backs came from none other than heartthrob Chris Evans, aka Captain America, who laid into the deep homophobia and insecurities required to throw a Straight Pride parade. In his tweets, Evans roasted how a deep fear of finding any men attractive can lead to the most homophobic of behaviors, and that it's deeply apparent these men are woefully disconnected from their own feelings.

He then went on to flay all the false equivalences being made between Straight Pride and LGBTQIA Pride, and how it's absolutely not the same, given the fact that straight people haven't been historically marginalized, discriminated against and threatened with violence.

A lot of Marvel fans were happy to see Captain America using his platform to come for the homophobic organizers in Boston.

It really doesn't take much for people to find an excuse to go gaga over Evans, so this really took it to another level.

While Evans sentiments may not be new, it is worth noting that few icons resonate more with straight men than Marvel superheroes, so if anyone is going to get through to these guys, it's Captain America.