Memorials to the Living from Men on Death Row

Inmate artists speak with GOOD about their unique Life and Death and Elsewhere exhibition. 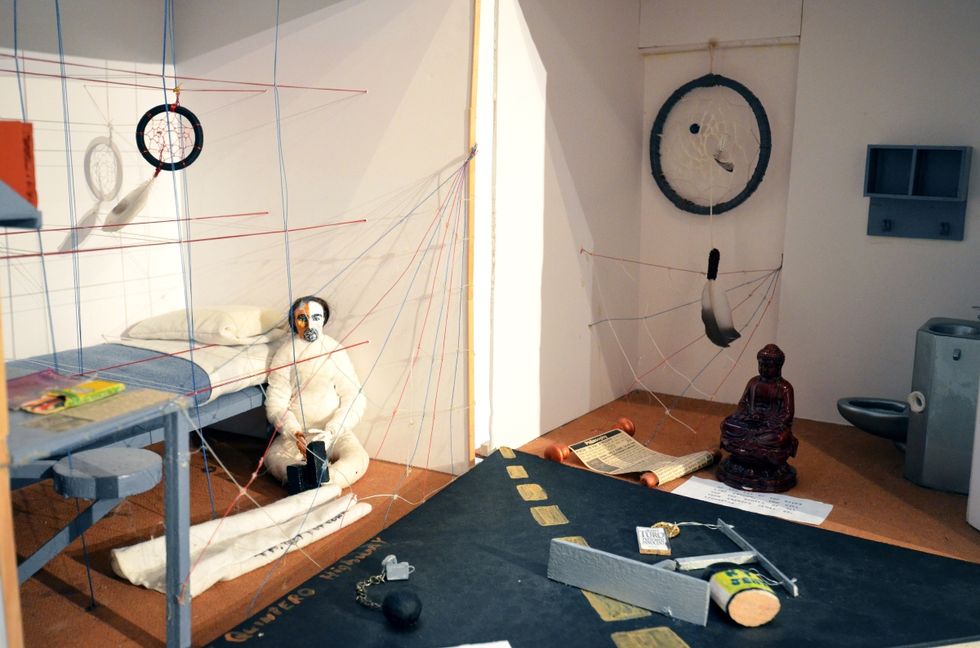 Life and Death and Elsewhere. Image courtesy of Apexart.

To die is biological. But to have one’s life snuffed out, whether by murder or official execution, is tragedy.

The death row inmates of Riverbend Maximum Security Institution, the unlikely artists behind the current Life and Death and Elsewhere exhibition at New York’s Apexart Gallery, understand this all too well. They know it intimately, and in ways that we cannot possibly fathom. Theirs is a double tragedy from which it would seem they cannot escape. But the works in the exhibition suggests otherwise.

Curated by Robin Paris and Tom Williams, leaders of the art workshop at Unit 2 (the Death Row unit at Riverbend), describe the exhibition as a collection of “memorials to the living.”

“Most of these pieces are not the actual memorials,” Paris tells GOOD. “They are their thoughts and designs of what they think they'd want the world to know.”

The exhibition features a number of striking works, though inmate Gary Cone’s art book, Pages from Gary Cone: I Am a Reader of Books, could be one of the best. Designed by artist Britt Stadig, Cone’s book looks like something one might find in an art museum or bookstore. Another marvelous work is Airplane, a huge cardboard airplane conceptualized by inmate Ron Cauthern (with assistance from fellow inmate Harold Wayne Nichols). Built at the prison, the piece was taken apart, shipped to New York City, and reassembled at Apexart.

The show also features Reading Is My Way To Exit, a tower made of books selected by Gary Cone; a giant flower on the gallery floor by Dennis Suttles, titled Flowers from Death Row I: The Tennessee Capitol; and Tree, a clay and painted-feather sculpture realized by Declicho Besh (“Ironhawk”), in collaboration with artist Sophia Stevenson, (amongst other works).

“The men who designed them are facing execution at the Riverbend Maximum Security Institution in Nashville, Tennessee,” Paris and Williams write. “By designing their own memorials, they ask you to consider the experiences of those who live on death row and to imagine a world that might commemorate them despite their convictions.”

Paris and Williams, both art professors at Watkins College of Art, Design & Film in Nashville, were brought into the death row inmates’ orbit in 2013 by Lisa Guenther, a philosophy professor at Vanderbilt University and the facilitator of a prison philosophy program.

“Lisa asked [the inmates] what they might do if they could do a public engagement, so they asked to have an art exhibition,” Williams explains. “So they had one at Vanderbilt University, and I saw that. Robin and I were then invited into the prison, and filled in for Lisa for the summer while she was gone, and it became an ongoing program as the guys asked us to stay on.”

Paris, Williams and the inmates have launched several exhibitions. The first show, Unit 2, Part I, featured collaborative work between inmates, Paris and Williams, and Watkins art students. The second show, which the men named From the Height Chair to the Electric Chair, was a big diorama designed to chronicle the life cycle from the cradle to the prison. For the third show, the guys made gifts, which Paris and Williams gave away the night of the opening, taking portraits of the people who received them. All told, the two took 200 portraits that night.

“Life and Death and Elsewhere is something I thought of early on to remind people of what death row is like,” Williams says. “I proposed that we think about a memorial show, and they ultimately felt like it was a good idea. We basically wrote a proposal and then started realizing the project.”

Paris says that Riverbend’s Unit 2 contains three levels, with each inmate in separate cells in the round. For about five years the inmates are basically in solitary confinement, inside their cells for at least 20 hours and sometimes more. When an inmate has been inside for three years and behaved well they rise to the topmost level, A, and gain privileges. Paris says these can include programs on religion, philosophy, art and other topics.

In a recreation building adjacent to their cell, 2A, Paris and Williams lead the art workshop. The space features a library, a leather shop and tables where they can all gather around on Thursday nights from 6:00 to 9:30pm to talk art and creation. “It's a big cinder block room, and we go over ideas, discuss things, but a lot of their art is made in their cell,” Williams says, with a guard in the room throughout the workshop’s duration.

Since it’s virtually impossible, or at least very difficult, for death row inmates to communicate with the outside world, GOOD requested that Paris and Williams ask the inmates some questions. The two happily obliged. The inmates’ responses reveal them as people affected in various ways by what they have done, but also moved to create and signal their humanity through art and books.

Harold Wayne Nichols, convicted in the 1988 rape and murder of 21-year old Karen Pulley, has accepted his crimes, according to an appeal of his death penalty and some other convictions. Nichols, who creates drawings, paintings and leather works in Paris and Williams’ workshop, believes that such art programs should be enhanced across the country. For him, the workshop is an opportunity to not to just to create art but to do so as collaborator.

For inmate Donald Middlebrooks, convicted of the 1987 murder of 14-year old Kerrick Majors, these art exhibitions are a way for him to prove to himself and others that he can be a creative force instead of a destructive one. “Seeing the ideas become real pieces shows us that we can can create instead of destroy, that we can set and, yes, even reach goals even if it’s nothing more than sharing a nightmare childhood,” says Middlebrooks, who suffered abuse as a child. “[Personally], I’ve found in sharing my true self [that] I have become me. I am healed and whole again, no longer that damaged child from yesteryear.”

Art is political for Derrick Quintero, whose mixed media installation If My Journey Were a Book Title appears in the Apexart exhibition. Convicted of the 1988 murders of Myrtle and Buford Vester after escaping from the Kentucky State Penitentiary at Eddyville with eight other prisoners, Quintero says that these art exhibitions are a way of creating political dialogue with the outside world.

Derrick Quintero, If My Journey Were a Book Title, 2012, Mixed media

“To be able to express what we feel with others is the only way to build and repair community,” says Quintero, who creates surrealist and impressionist acrylic paintings for his friends and family, but also sells them to buy more art supplies. “Art [also] touches the spirit and gives one time to reflect inward.”

Derrick Quintero, If My Journey Were a Book Title, 2012, Mixed media

“The Yurok Indians have one law, the Brush Dance — be true to yourself,” he adds. “We know things, we just have to be willing to listen to our spirit speak.”

In A Path Appears: A Memorial, A Resurrection of Flesh, inmate Akil Jahi creates a diorama of a man’s journey into a “mystic world”. A member of the R.E.A.C.H. Coalition (Reciprocal Education And Community Healing), Jahi explains that art is but one aspect of a larger transformation in Unit 2:

“There 66 inmates here and we have transformed Tennessee’s death row into our own community, taking care of each other,” says Jahi, who enjoys making cards and writing poetry. “Like cooking meals for special days like holidays [or] birthdays; making care packages for the unfortunate. [And] those of us who have jobs put money together to support our brothers.”

Akil Jahi, Proposal for a Monument, 2015

If Jahi has one message for the outside world, it is this: “Love with all that you are and those around you will adapt to your kindness, humbleness and willingness to care for others.”

Will Jahi and his fellow inmates’ words and art convince the skeptics who may doubt their sincerity and self-professed transformation, including the victims’ family and friends? Probably not.

Regardless, Life and Death and Elsewhere underscores that the men (and women) on death row are not beyond redemption. That they can, and do, have something to contribute, whether that’s insight into crime, prisoner rehabilitation, the political morality of execution, or how they should be viewed upon death.

Like art itself, the meaning, the personal impact of Life and Death and Elsewhere depends on the viewer and what they are willing to take from it.