Police Are Training Eagles To Snatch Drones From The Sky

“A low-tech solution for a high-tech problem” 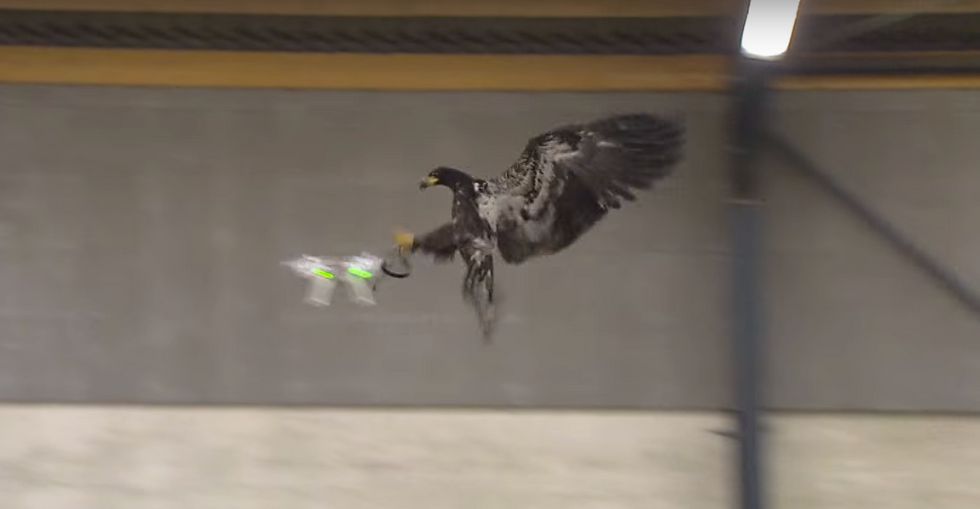 Just when you think technology has taken over irrevocably, nature has a way of striking back and asserting her dominance. Such is the case with Guard From Above, a raptor-training program currently operating out of the Netherlands. The Netherlands’ national police have teamed up with the program to snatch unauthorized drones out of the sky with the expert precision of bald eagles, Design Boom reports.

As drones increase in popularity, managing them will pose a major headache for several organizations including air traffic control agencies, firefighters, and local police. Using birds of prey to keep rogue drones in check isn’t as wild of an idea as you might think, says chief operating officer and co-founder Ben de Keijzer, who has more than 25 years of experience training birds. According to Guard From Above’s website, it’s a “low-tech solution for a high-tech problem.”

The National Audubon Society’s Geoff LeBaron says that tension between drones and birds of prey already exists thanks to the invasive, aggressive nature of the unmanned aircrafts. LeBaron, who also runs the organization’s Christmas Bird Count which tracks U.S. bird populations, said in an interview with The Guardian,

“The drones are pretty much the size of a bird of prey, so smaller birds on the ground aren’t likely to mob a bird of prey when it’s flying—but larger birds are, especially when it’s around their nests. The birds of prey are having an aggressive interaction to defend their territory from another bird of prey.”

LeBaron also commented on the expert precision of these large birds, explaining that the “birds can hit the drone in such a way that they don’t get injured by the rotors.” He adds, “They seem to be whacking the drone right in the center so they don’t get hit; they have incredible visual acuity and they can probably actually see the rotors.”

Watch the video above to see the birds in action, and think twice next time you decide to fly your drone into unchartered territory.