Long relegated to being the handmaidens of the more revered male monks, devout Thai women are now establishing their own religious order 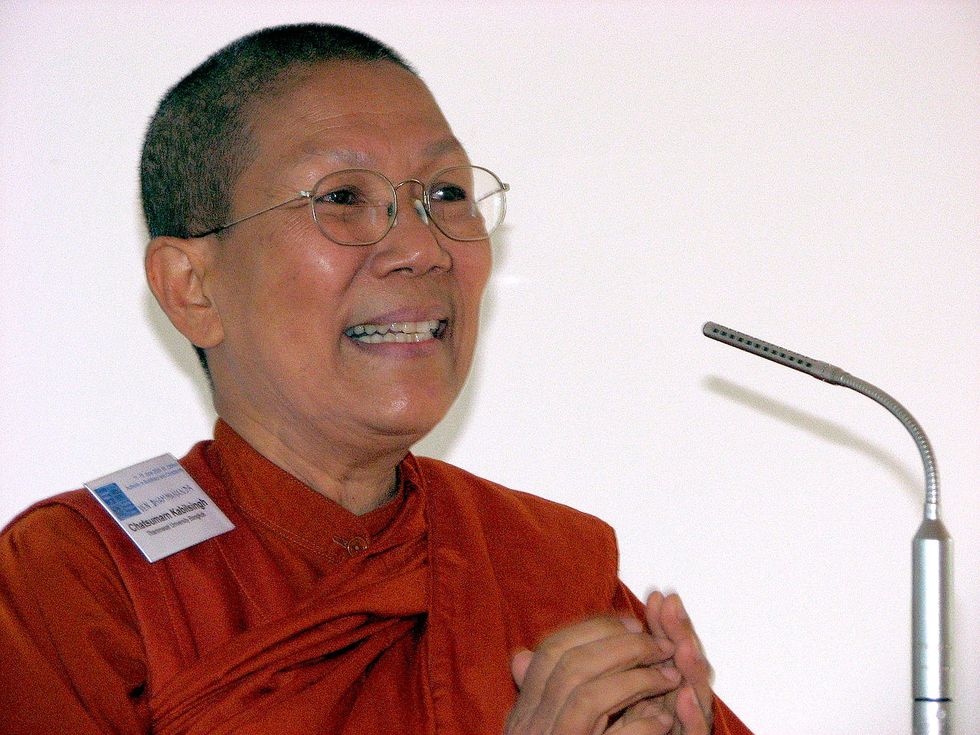 Many in the Thai state, clergy, and mainstream population are in a tizzy over one woman named Dhammananda. As a Bhikkuni, a Theravada Buddhist nun, she’s raised hackles for much of the past decade by attempting to reestablish the Bhikkuni lineage in Thailand. Although these nuns exist elsewhere in the world, Thai Buddhists have denied women’s ability to take the same monastic vows as men for ages. This spiritual embargo is just one egregious example of the ways in which Buddhism, theoretically an egalitarian faith, gets bogged down in a mire of misogyny and cultural mores from region to region, failing to live up to its noblest values. But Dhammananda, who was ordained in Sri Lanka by more woman-positive Theravada monks in 2003, now operates an all-nun temple a couple of hours outside of Bangkok and helps to ordain other women. She is, in Thailand, the avatar of an emergent Buddhist feminism, using the logic and tools of her faith to push for equal spiritual rights and access for women in her nation and beyond.

While Buddhist history is full of Bhikkunis and other prominent women, and Buddhist theology can even be used to break down gender as a construct, it’s worth acknowledging that there’s plenty in the faith’s scriptures that can be weaponized in the name of patriarchal control. Stories abound of the Buddha urging women to be doting wives and Buddhist nuns exist separate from and under very different rules than monks. Apologists explain away these disturbing blips as pragmatic artifacts of the Buddha’s era—a radical religious ideology making accommodations for its own existence within a rigid social structure. Some just see these old stories as irrelevant. They say Buddhism is a means by which women and other marginalized peoples can potentially construct a new identity or gain a new status defined by faith and spiritual merit rather than gender or birth. But regardless of the theoretical potential of abstract Buddhism, the fact remains that it’s pretty easy to use the faith as a tool in the perpetuation of a misogynistic society.

Thai society is a particularly egregious example of hijacking religion in the name of a pro-male status quo. Becoming a Bhikku (a male monk) brings great social status and material rewards for men, but in Thai Buddhism, women are limited to the role of Mae Chi—essentially the spiritually, socially, and materially inferior handmaidens of monks. The Thai Buddhist clergy have gone so far as to suggest that Bhikkunis never truly existed, that women cannot attain equal spiritual status as men, and that, as good Buddhists, women in abusive relationships should accept their fate as karma. And variations on this unfortunate dynamic play out all over the world, as in Western Buddhist circles where a trickle of sex scandals continually reminds people of the potential abuse and coercion male spiritual leaders of any faith can wield over devotees.

But rather than turn away from Buddhism, many women have embraced the egalitarian ideals of the faith as tools to undermine patriarchic societies. Thai Bhikkunis write beautifully about taking their vows because they saw faith as a source of progress rather than traditionalism. This kind of Buddhist feminism has taken root far beyond Thailand as well, especially in places like America and Europe where many of the early disciples of Buddhist teachers and leaders were women. Unsettled by misogynistic undertones and passages in Buddhist history, society, and literature, these young Buddhist communities have sought to gender-neutralize liturgies, recover female Buddhist history and icons from the mists of time, and set up collaborative organizations, helping other women across the world gain religious access and education traditionally denied to them.

Bhikkunis like Dhammananda and their allies have inspired a flowering of female leadership and engagement in Buddhism the world over. These Buddhist feminists, whether by bucking norms or by engaging in meaningful theological dialogue with their male peers, are opening up ever more space for women to participate in and enjoy the social and spiritual fruits of Buddhism. Hopefully, if they continue on their current track, they may be able to finally align Buddhism’s rough reality with its idealistic egalitarian promise.