He called it “a matter of personal conscience.” 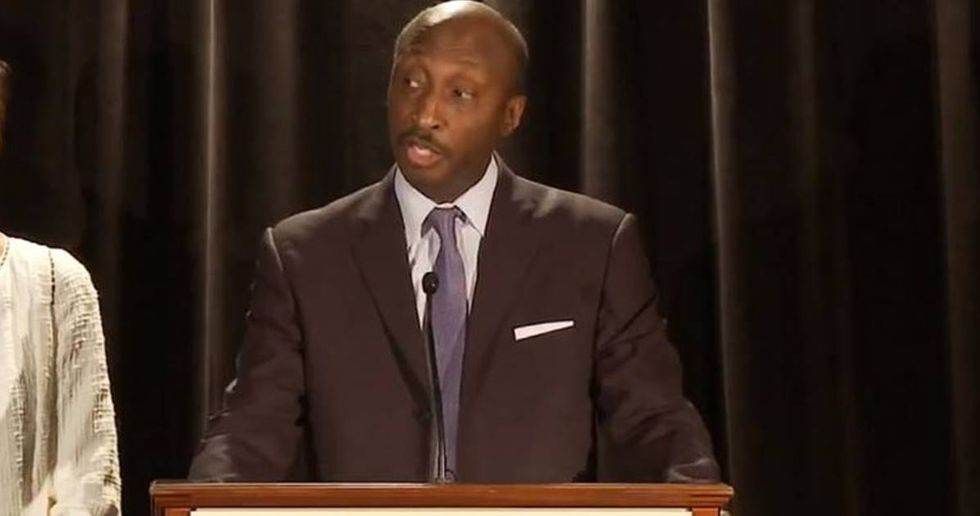 In the wake of the horrible act of white supremacist terrorism that struck Charlottesville, Virginia, on Saturday, President Trump blew the single easiest thing a president could do: condemn Nazis. Instead, Trump gave a vague response saying there were “many sides” to blame, while the only two sides on display were neo-Nazis and those who stood against their hatred and violence. After his speech, when reporters asked about the white supremacists who supported his candidacy, Trump sauntered away from the podium, ignoring their questions.

Trump has a history of specifically calling out those who oppose him on Twitter, but for two days he remained completely silent on the KKK, “alt-right,” neo-Nazis, and white supremacists who gathered in Charlottesville. Although the White House did release a statement that said “of course” Trump’s condemnation included “white supremacists, KKK Neo-Nazi and all extremist groups,” the statement was attributed to an unnamed spokesperson.

Trump’s inaction prompted Merck CEO Ken Frazier to step down from the president’s council on manufacturing. He released a statement through Merck’s Twitter page saying his decision is “a matter of personal conscience” and “to take a stand against intolerance and extremism.” Frazier is the second African-American to lead a major pharmaceutical company and has a history of working for social justice as an attorney.

While Trump had yet to condemn white supremacists, he wasted no time going after Frazier on Twitter.

Now that Ken Frazier of Merck Pharma has resigned from President's Manufacturing Council,he will have more time to LOWER RIPOFF DRUG PRICES!

Trump’s decision to criticize an African-American man standing up against intolerance before attacking the perpetrators of racist violence shows a someone with a broken — if not completely nonexistent — moral compass. On Monday, Trump finally condemned white supremacists, saying, “Racism is evil — and those who cause violence in its name are criminals and thugs, including KKK, Neo-Nazis, white supremacists, and other hate groups are repugnant to everything we hold dear as Americans.” But coming from a man who rose to political power perpetrating the “birther” conspiracy, calling Mexicans “rapists,” and scapegoating Muslims, his worlds couldn’t ring more hollow.

Frazier isn’t the only big-business executive to quit one of Trump’s advisory councils. Tesla and SpaceX CEO Elon Musk quit three of President Trump’s business advisory councils after he pulled out of the Paris climate agreement in June. “Climate change is real. Leaving Paris is not good for America or the world,” Musk said. Disney CEO Bob Iger followed suit and left an advisory council for the same reason, calling it “a matter of principle.” Trump refrained from attacking them on Twitter.

SpaceX CEO & Merck CEO both resigned from an advisory council.

Trump only attacked one.

I wish I could tell why just by looking at them. pic.twitter.com/qp4Q7gIC9V