Mom ordered an infant-sized Frog and Toad shirt from China. When it arrived, she ‘just screamed.’

Some people are shaming her for it. 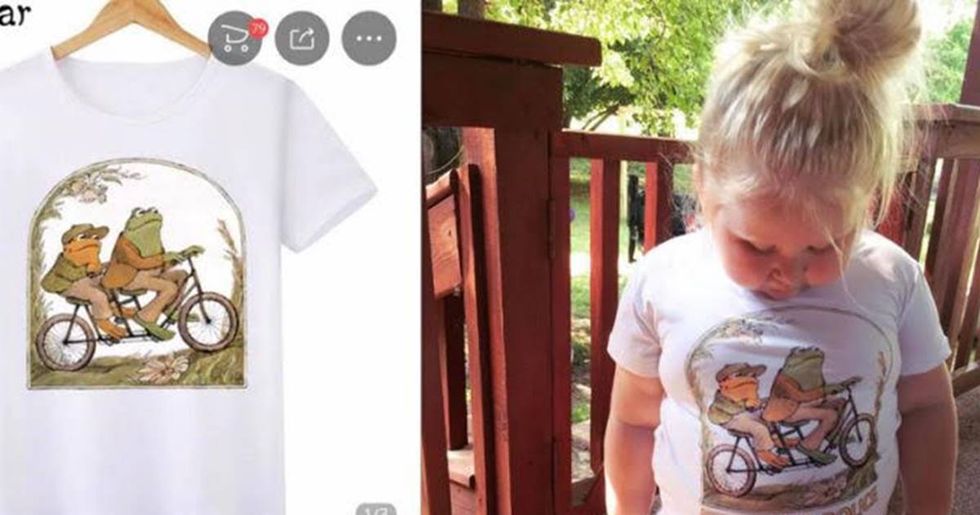 This article originally appeared on 06.01.19

Kelsey Dawn Williamson, 23, from Benton, Illinois has ordered over 50 shirts from AliExpress, an online retailer based out of Hangzhou, China. But when the Frog and Toad shirt she ordered on May 10 arrived, she “literally did not know how to react so I just took a few moments to stare at it and try to process."

The infant-sized shirt has a picture of the iconic reptiles from the children's book series riding old-fashioned bikes with “FUCK THE POLICE" written at the bottom.

Williamson posted a photo of her daughter Salem in the shirt on Facebook and it quickly went viral.

The shirt that was delivered looked exactly like the one in the online store, just without the caustic N.W.A. lyric.

While it seems utterly bizarre that someone would create a shirt with “FUCK THE POLICE" written beneath a picture of Frog and Toad — a duo who've never been known to harbor ill will against law enforcement — there's a good reason.

Memes featuring Frog and Toad are so popular they have their own subreddit. The shirtmaker, who probably doesn't have a license to use Frog and Toad, must have got the photo from a Google search. The person who made the shirt was most likely Chinese and either didn't speak English or has a very poor eye for detail.

After Williamson received the shirt, she Facetimed her husband and they screamed together. “We both just lost it, dying of laughter," she told Buzzfeed. “All he could say was 'Oh shit.'"

“I've told [Salem], 'People really like your frog shirt!'" Williamson said. But she's not letting her child wear the offensive shirt to preschool. “It's going in her baby box so we can bring it up when she's older."

Unfortunately, the incident has been all laughs for Williamson. She's received messages from people who've fat-shamed her daughter.

“People were actually messaging me just to say mean things about her," she said. “A ton of people calling her fat, asking me what I feed her to make her so big, telling me the shirt I bought was too small."

But Williamson has remained strong and fought back against the shamers. She edited her post to address her daughter's weight but refuses to take it down. “SHE SEES SPECIALISTS FOR HER WEIGHT. SHE CANT HELP IT. I CANT HELP IT. MY HUSBAND CANT HELP IT. IT IS OUT OF OUR CONTROL. JUST LAUGH AT THE FUNNY SHIRT," Williamson wrote on Facebook.

That's right people, just laugh at the funny shirt, and stay out of people's business.