Guy goes ape sh*t after a woman rejected him on Tinder. Women are relating too much.

A lot of men don't realize this goes on all the time. 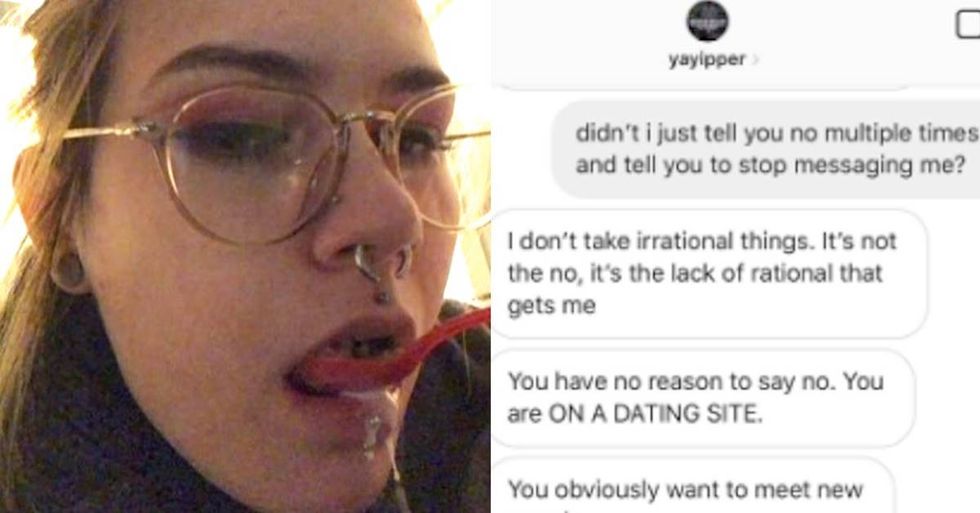 One woman’s story of a guy who stalked her on Instagram after she swiped left on his Tinder account is now going viral.

“i rejected a man today, who found me off tinder but we did not match,” the woman, who’s identified as Julia, writes. “this is how the conversation ended after i said 6 times i was not interested.”

i rejected a man today, who found me off tinder but we did not match. this is how the conversation ended after i said 6 times i was not interested. pic.twitter.com/AfQX2tWCK9

Based on her tweet and the screenshots, it looks like the manchild messaging her didn’t even merit a right-swipe: they never even matched on Tinder. But after seeing her Instagram username in her Tinder bio, the dude found her and started to harass her via inbox.

The screenshots start with her saying, “didn’t i just tell you no multiple times and tell you to stop messaging me?”

He responds, “I don't take irrational things. It’s not the no, it’s the lack of rational that gets me,” which really sets the stage for just how little sense his arguments are going to make.

He goes on to shame Julia for joining Tinder when she had no intention of speaking specifically to him. “What is it you want in life? What do you want from tinder?” he asks. “Why be on a dating site? Do you have answers to any of these questions? Lol I'm so curious.”

She rightly responds, “i don’t have to answer your questions. i don’t care that you're curious. take no for an answer. my answer is not changing. you are forceful and creepy.”

He doesn’t understand how he’s creepy, saying, “I don’t think you know the meaning of those words haha,” then adding, “Girls like you are why guys are such assholes.” He later says, “You have issues. Serious deep set issues. I feel sorry for you. And pity anyone in you life.”

He continues sending messages, ending with, “Why are you even alive? What’s the point if you’re just going to spread misery and negativity? What a waste...”

The tweet has since gotten tens of thousands of retweets and favorites. Many Twitter users are replying with similar stories of men going ballistic when women don’t want to sleep with them.

One woman spoke up with a similar story.

This is so scary. He is potentially dangerous. I rejected a male friend once via text, and he wanted reasons WHY I wasn't interested in him. Thankfully he is no longer a friend of mine or in my life

Another posted a screenshot of harassment she’d received from a man.

Just because I didn't want to meet him. pic.twitter.com/Pz1DwfdkbK

Some noticed parallels between this guy’s apparent mindset and that of the incel community.

This reads like some next level incel shit. Hes articulate, and he knows it and thinks hes "so smart/ woke". Then tries to do the classic "I'm deluded to think I'm just but really it's an excuse to say some toxic shit"

God damn. This is cringe. He lacks serious self awareness.

This person pointed out that while this behavior’s not surprising to women, a lot of men don’t realize it goes on.

Stuff like this goes around and men still wonder why women fear for their lives and safety. This is beyond creepy and I’m sorry you had to experience this

Others couldn’t believe how long he kept a conversation going with... himself.

He just had a whole argument with himself