This is how men should treat other men who mistreat women. 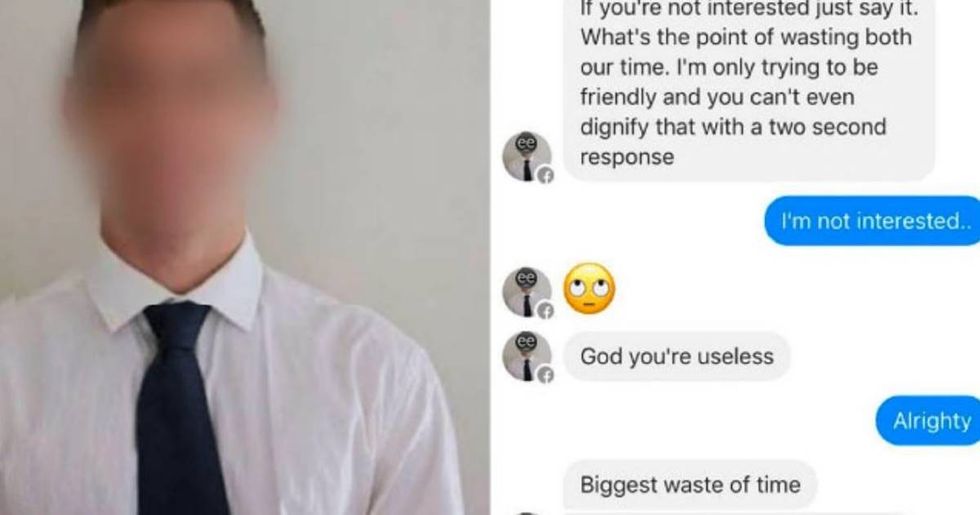 This is the story of a guy named Nick. Like many 24-year-old dudes, he was on Tinder, looking for that sweet, NSA (no strings attached, not National Security Agency) love.

But a guy named Kevin, who went to college with Nick, exposed his former friend for being a racist, abusive jerk to women on the popular dating app. Kevin put Nick on blast in a now-viral Facebook post, which includes screenshots of a conversation between Nick and Kevin’s female friend.

i met this guy in college and he seemed like a decent guy, he was nice, friendly, etc. over the weekend, he matched a friend of mine on tinder and they exchanged messages. when she didn’t respond immediately, he lost it and left a bunch of nasty messages. i called him out on it, he denied, and he proceeded to block me on all social media.

sexism and racism takes many forms and it cannot be tolerated.

as a man and POC, we can't let this stand.

He then asked their mutual friends to un-friend him.

The conversation between Kevin’s friend and Nick began innocently enough:

“I’m 6’2” and I work out” is a red flag for potential dickitude. But it got much worse, quickly. Nick became verbally abusive and racist when the woman (understandably) stopped responding to his texts.

This is messed up on so many levels.

Since sharing the original post, Kevin said he had heard from other women who’d had similar experiences with the same guy. He posted screenshots from a conversation between Nick and a different woman:

OH MY GOD I AM SCREAMINGGGG

This is 100% nothing new for this dude. He’s repeatedly pushed boundaries with myself and people I know, sending unsolicited nudes more than once like NAHHH man...

In conclusion: Do not swipe right on this guy.

P.S. Dudes and not-dudes, do not be a jerk on Tinder or anywhere else because THE INTERNET IS WATCHING, y'all.