A Democratic freshman just exposed Betsy DeVos' literacy hypocrisy to her face. And it was beautiful. 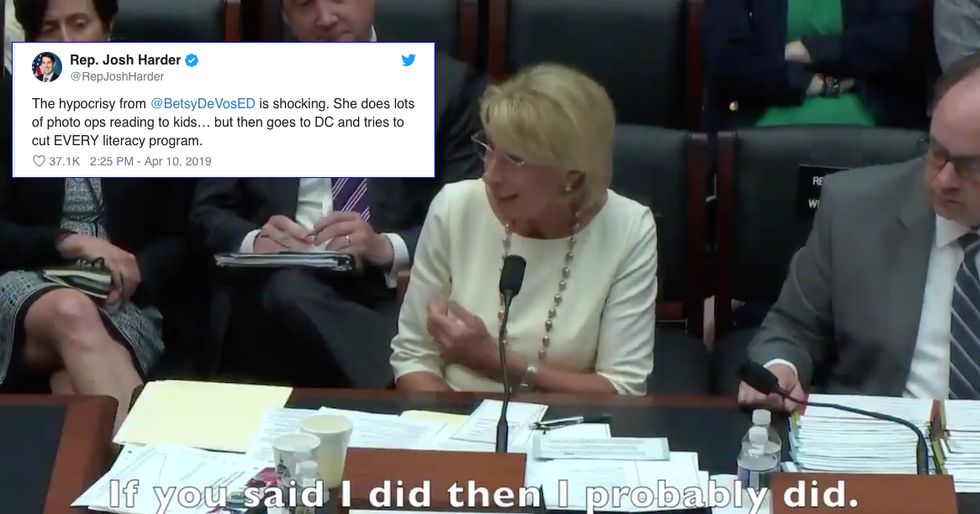 According to Concordia University-Portland, more than 30 million adults in the United States cannot read, write, or do basic math above a third-grade level.

The World Atlas ranks the United States 125th out of 197 countries, saying just 86% of U.S. residents are able to “sufficiently read and write.”

If the United States had a functioning executive branch, this would be an issue the Secretary of Education would care about. However, Betsy DeVos has proposed over $200 million in cuts to literacy programs in the U.S.

That’s a small drop in the bucket compared to her overall goal of eliminating 29 educational programs, totaling $7 billion in federal funding.

Democratic Representative Josh Harder from California took DeVos to task on Wednesday, April 10, at a hearing over her department’s policies and priorities before the House Committee on Education and Labor.

In a video which has since gone viral, Harder accuses DeVos of being hypocritical for posing in photos reading to children, while proposing massive cuts to programs that teach them to read.

“If you go on the website of the Department of Education right now, the picture is you reading a book to a kid, and that’s phenomenal,” Harder said. “And you’ve gone around the country reading books to kids, talking about the importance of literacy,” he added.

“But then you get back to Washington, you go into the cloak of bureaucracy in a back room somewhere, and you cut every single program, and indeed, you actually eliminate every single program fully developed and fully dedicated toward addressing the problem that you’re actually saying needs to be solved.”

“And I think that hypocrisy is disappointing, shocking, and, frankly, really heartbreaking at a time when we have some real challenges in our educational system,” the congressman said.

DeVos’ response was to claim that federal programs are ineffective.

“If these problems had been solved by the federal government, we would have seen different results in the last 50 years,” she said. “We have not.”

If DeVos gets her cuts, we’ll learn the effectiveness of these programs the hard way, when the literacy rates drop further because they’re not around.