“I finally have the smoking hot body I have always wanted… having been cremated.” 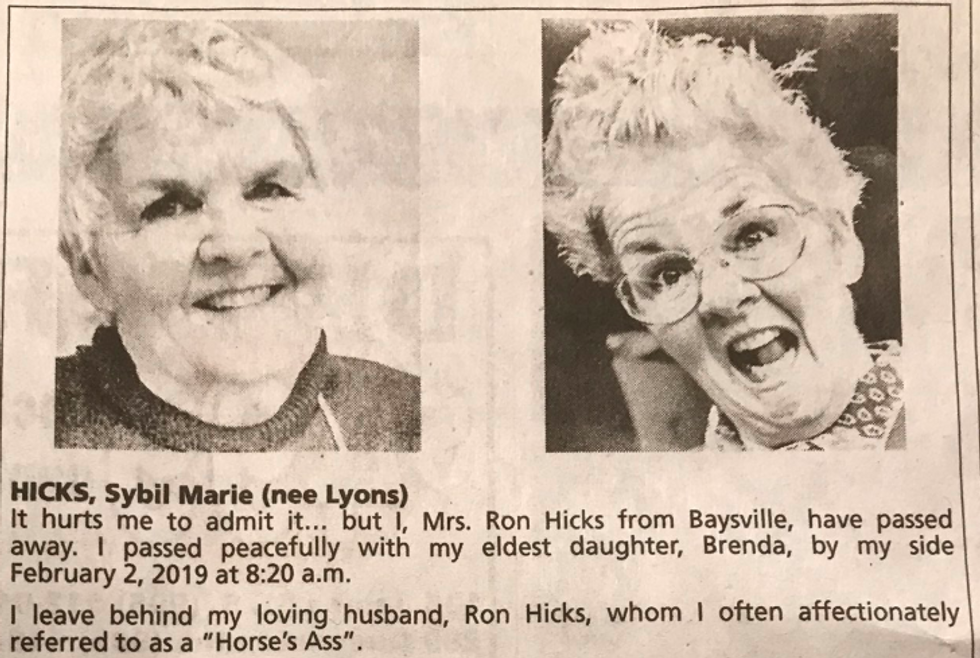 It's said that everyone dies twice. The first is your physical death, the second is the last time anyone utters your name.

Sybil Marie Hicks, from Baysville, Ontario, died on February 2, at the age of 81, but it'll be a long time before her name is forgotten. Her children have turned her into a posthumous celebrity after writing a hilarious first-person obituary for her that was published in The Hamilton Spectator on February 5.

According to her daughter, it was fitting tribute.

“Mom was never boring," Hicks' daughter, Barb Drummond, told Yahoo Lifestyle. “Mom lived large. She would do anything for anyone. It was rare for Mom not to have a smile on her face. Mom was always ready for a laugh."

The obituary begins with a shot at her husband, Ron. “It hurts me to admit it, but I, Mrs. Ron Hicks from Baysville, have passed away," they wrote. “I leave behind my loving husband, Ron Hicks, whom I often affectionately referred to as a 'Horse's Ass.'"

She then goes on to roast her own children.

“I also left behind my children whom I tolerated over the years; Bob (with Carol) my oldest son and also my favourite. Brian (with Ginette) who was the Oreo cookie favourite, Brenda AKA 'Hazel' who would run to clean the bathrooms when she heard company was coming," they continued. “Barbara (with Gordon) the ever Miss Perfect and finally Baby Bruce who wouldn't eat homemade turkey soup because he didn't want to be alert looking for bones while he ate."

The piece ends with a great zinger and a bit of a mystery: “I finally have the smoking hot body I have always wanted… having been cremated. Please come say goodbye and celebrate my wonderful life with my husband and his special friend Dorothy who is now lovingly taking care of my horse's ass."

Did her husband have a side piece or are they talking about the dog?

The viral obituary has done more than just spread a few much needed laughs across the world, it's helped the family heal after Hicks' long battle with Alzheimer's disease. The disorder may have stolen Hicks' quick wit sharp tongue; but, in a way, the obituary, has given voice to a woman who was long silenced.

“We just thought that when she passed, we really didn't want to have this sort of boilerplate template obituary," Brian Hicks, the second eldest of Hick's five children, told the CBC.

“We wanted to do something that kind of celebrated who she was and to give us an opportunity to basically have one last conversation with her, and have some laughs at the same time," he said.

The Hicks family hopes that those who are moved by their mother's story will consider donating to their local Alzheimer's charity.

Read the entire obituary at The Hamilton Spectator.