Hillary Clinton and Alexandria Ocasio-Cortez roasted Jared Kushner so hard he may delete his account.

This crossover broke the internet. 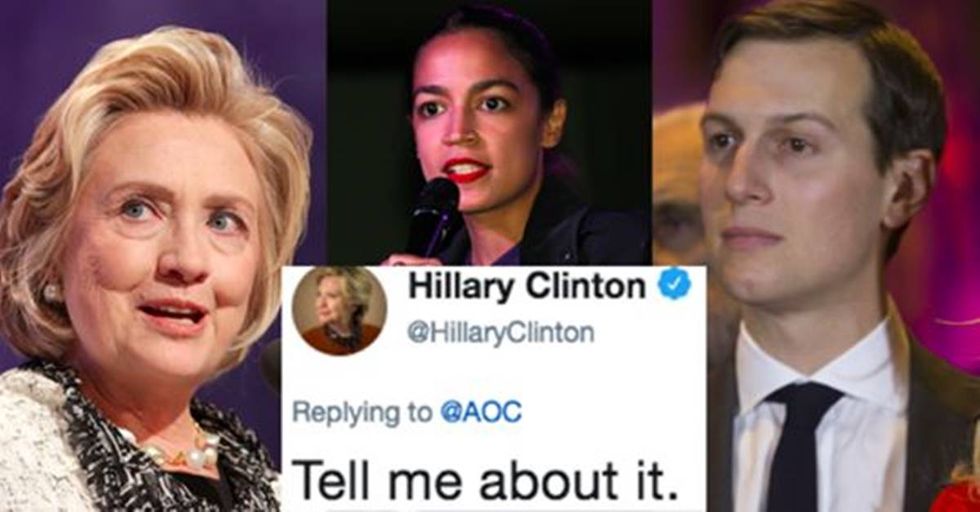 Within the first few months in office, congresswoman Alexandria Ocasio-Cortez has already cemented herself as one of the best representatives to follow on Twitter. Whether she’s laying out the issues with America’s gun violence, summing up the Left’s collective feelings about political moderates, or ripping into Fox News for yet another racist jab, Ocasio-Cortez’s online presence manages to make politics both accessible and exciting to people who have long tuned out the talking heads.

While Hillary Clinton’s online presence has been relatively quiet since the election, she’s still piped up when it felt fitting. Once, to dole out a long overdue I told you so, another time, to call out Trump for stealing her campaign slogan.

So, when Clinton logged on to respond to one of Ocasio-Cortez’s recent tweet calling out Jared Kushner, it was an unexpected and perfectly timed cameo.

Ocasio-Cortez tweeted out a recent video clip that showed the Democrat representative Ro Khanna calling out the irony of Jared Kushner using Whatsapp to contact foreign officials. The irony, of course, laid in the fact that Trump's election campaign fixated on Clinton’s use of a private email server.

Her caption satirized the chorus of people asking “but her emails.”

And Clinton herself apparently took note, because she chimed in to echo Ocasio-Cortez’s sentiment.

Tell me about it.

\n
The exchange immediately lit the thread on fire with email-related GIFs and puns, and of course, impassioned arguments about policy.

This is a moment.

\n
While this may be the first big Twitter exchange between the Ocasio-Cortez and Clinton, given just how much dirt is being dug up about the current administration, I doubt it'll be the last.