How Apps Are Helping Kids with Autism Learn to Communicate

Technology is helping children with autism establish the building blocks of literacy. #ProjectLiteracy 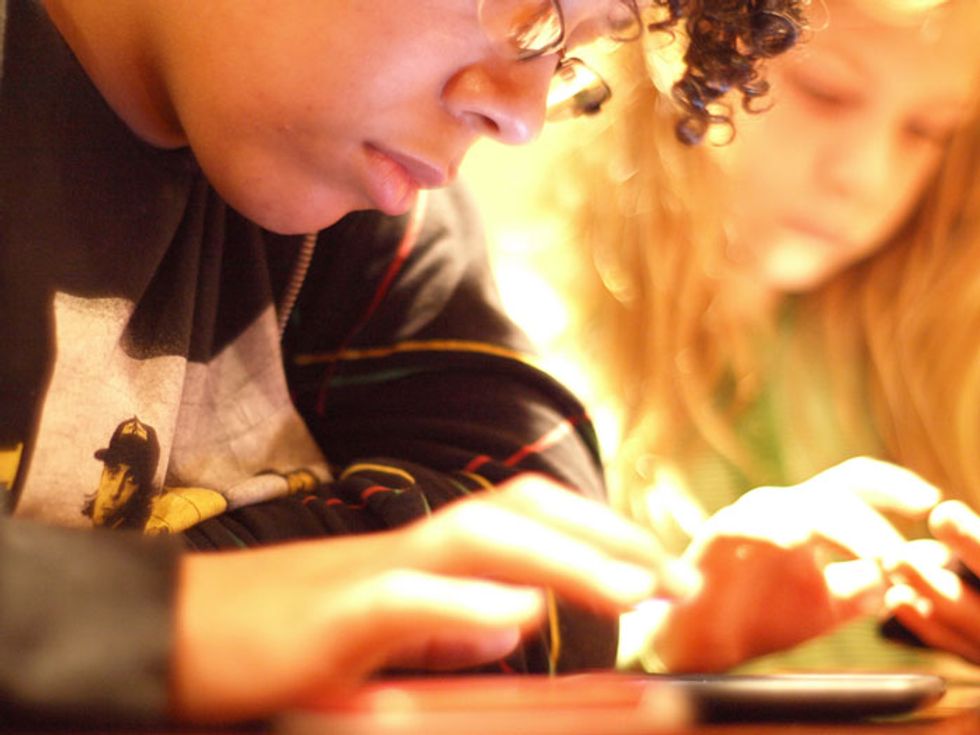 Since 2012, there has been a 30 percent increase in children diagnosed with Autism Spectrum Disorder (Autism). One in 68 kids are said to be on the spectrum these days, and for many of them, conveying what they want, feel, or think—whether verbally (as many as 30 percent are unable to speak) or nonverbally—can be a constant battle.

In addition to being frustrating, early troubles with communication can create a ripple effect that lasts a lifetime. Even high-functioning kids on the spectrum can fail to cultivate the building blocks of literacy. A 2006 study revealed that autistic children often easily figure out how to recognize letters and words, but when it comes to reading comprehension, their skills are severely impaired.

Some educational institutions, like Canada’s Hanen Centre, suggest that this might be because parents and teachers tend to assume that autistic kids who can’t express themselves aren’t ready to learn. So rather than taking a holistic approach to communication—connecting reading, writing, and words with gestures, books, and social interaction—we tackle a single skill at a time, and often do so much later than we would with non-disordered children.

Shantha Bloemen, Chief of Communications and Partnerships for UNICEF China, disagrees with this all-too-common method. Communication is communication, she says, and any way an autistic student articulates his wants or needs can lead to greater comprehension and critical thinking skills down the road.

Bloemen likes to tell the story of a mother in China who was worried about her autistic toddler son’s latest peculiar behavior—he kept putting his finger in his mouth. For most kids, this wouldn’t be a big deal, but for her son, this new habit could turn into a repetitive, problematic tic.

In addition to asking him to stop, which she knew would be a fruitless endeavor, the mother pulled up an app on a tablet provided by the Beijing Stars and Rain Education Institute for Autism, the first center for autistic individuals in China. Within minutes, the boy found an icon marked with a large tooth and tapped it. Immediately, a young child’s voice rang out from the tablet, saying “I have a toothache!” in Chinese.

It wasn’t a tic, after all—in fact, in some ways, the boy was utilizing a form of baby sign language. The app that served as mediator between mother and son is called YuuDee, created by Professor Liping Wei of Peking University, available in the Apple app store since 2014 and for Android devices just last month.

According to a 2013 study, the easy-to-grasp imagery and intuitive interfaces used in tablet- and smart phone-based apps make it easier for autistic children to concentrate and demonstrate what they’ve learned. Other studies have shown that apps enhance their attention spans and improves their willingness to interact with in-person instructors.

Dr. Chester Goad, a university administrator in Tennessee and a member of the Editorial Review Board for the Journal of Postsecondary Education and Disability, adds that these kinds of apps, developed to help kids with autism build up their learning, sensory, and fine motor skills, have proven to be a necessity in our digital era. He explains that “for years, simple picture boards [attempted to meet] this need. But with the advent of smart devices, a whole new world [has] opened up.”

Using a base library of over 400 easily identifiable icons, with the option to customize and add thousands more, YuuDee helps autistic children articulate the basics, such as hunger, thirst, uncomfortable clothes, an itch, or a pain. In time, they can learn to express more complex messages, such as “Help me to flush the toilet” or “Help me comb my hair.”

Donna Cole Wilson, a speech language pathologist at PROVAIL, a service agency dedicated to helping children with disabilities in Seattle, says that in her experience, “communication apps for children with autism have been very effective.” Other successful augmentative and alternative communication (AAC) apps for autistic kids include VocalID, aacorn, and easyAAC. Autism Speaks also houses a database of apps available for a variety of functions like language, communication, behavioral, functional, and social skills development.

Wei says that “intensive behavior intervention is the most effective option” for autistic children to function better, but apps can help too. Studies have shown that any kind of “computer instruction,” as Georgetown University’s Psychology Department labels it, can be more beneficial to children than more traditional instruction for autistic children, who were more attentive and motivated, and learned more vocabulary words, using software than when they were taught via more traditional teaching programs with specialists.

Wilson adds that using these apps can be just as useful for parents as it is for kids. As she puts it, “parents will [properly] implement [these apps] if they are provided with support and training on how to use the app to maximize the person's potential.”

Before Wei invites parents to hand their YuuDee-enabled devices over to their kids, she trains them to use YuuDee themselves first. Repeated use of the app, she says, has led to impressive results: “Parents and teachers reported that children are visibly happier and [...] some of them even begin to imitate the voice from YuuDee.”

YuuDee’s voice prompts and icons are designed to be easily understood by pre-verbal learners, often delighting them in the process.

According to UNICEF, children have to be trained by a parent or teacher in order to learn how to use Yuudee. This is the norm for augmentative and alternative communication devices (AAC).

Wei notes that there are five phases of training children to use the Yuudee app, which are also applicable to learning the use of any AAC app. The first phase is about teaching the children to associate a specific request with the picture on the screen. Then, children have to learn how to distinguish between various icons on the same screen, finding the particular icon that they need, and then actually figuring out how to open the app on a device in order to initiate communicating a need. Wei indicates that the phase of training regarding “making a request at a distance,” or being able to call out or seek out help when a parent is not nearby, is the toughest for children to learn.

AAC apps and devices can help with communication and even reading skills—as is the case with Talking Book, which also enables users to learn about and adopt new practices to fight poverty and disease—but Wei doesn’t want children to only interact with the device. She stresses that the app should ideally function as a bridge between the child and other people.

Before she developed YuuDee—which means “little rain drop” in Chinese—Wei’s main project was mapping the genealogy of families with autism. She decided to create the app because she wanted to help the families with whom she was working. At the time, she says, most apps or tools were either too expensive for the many poorer families in China trying to get help, or they were only available in English.

What sets this particular app apart from others on the market is its design and support from the United Nations. YuuDee is available for free for both iOS and Android and in English, thanks in part to UNICEF’s Innovation unit, which Bloemen says “tries to make technologies like these available to people who cannot afford them.” UNICEF’s grant of $30,000 also helped make the app open source, allowing it to be adapted to different languages in order to reach even more families.

But Bloemen is quick to point out that the app came about as a “labor of love” on Wei’s part—and from artists at Tsinghua University, who donated nearly 3,000 hand-painted illustrations for use as the app’s icons. YuuDee’s Chinese-language voice is none other than Wei’s own son.

China is just beginning to recognize special needs children and families, according to Wei, so this app has proven to be a breakthrough, especially for families who cannot afford what are often expensive tools and care. With UNICEF’s backing, YuuDee may soon benefit children all over the world by teaching them how to communicate, while helping parents learn more about how their children think and express themselves.