The Immigration Ban Is A Head Fake, And We’re Falling For It

The “resistance” is playing right into Trump’s playbook. Here’s how to stay alert 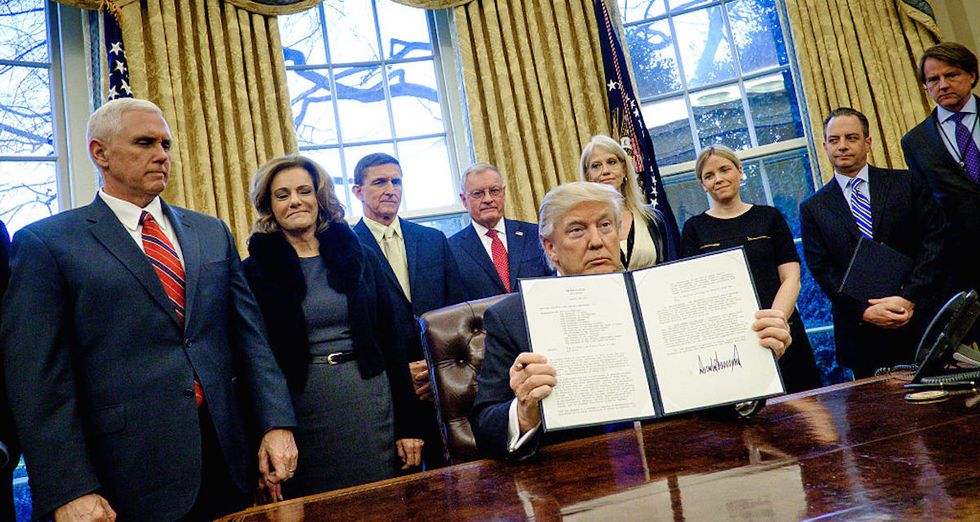 When I read about the incredibly active first week of the Trump administration, I struggle with two competing narratives about what’s really going on. The first story is simple: The administration is just doing what it said it would do, literally keeping its campaign promises. Lots of people won’t agree, but it’s playing to its base. They’re also not really good at this whole government thing yet, so implementation is shaky. The second is more sinister: The administration is deliberately testing the limits of governmental checks and balances to set up a self-serving, dangerous consolidation of power.

A legitimate argument can be made for the former: a relatively extreme and inexperienced administration was just put in place, and they haven’t yet figured out the nuances of government. But a few of the events in the past 72 hours —the intentional inclusion of green card holders in the immigration order, the DHS defiance of a federal judge, and the timing of Trump’s shakeup of the National Security Council — have pointed to a larger story. Even worse, if that larger story is true, if the source of this week’s actions is a play to consolidate power, it’s going really well so far. And that’s because mostly everyone — including those in protests shutting down airports over the weekend—are playing right into the administration’s hand.

I obviously can’t pretend to know the intentions of the new president, but let’s pretend the power consolidation move is what’s actually happening. In fact, let’s pretend we’re the Trump administration (not necessarily Trump himself, more likely his inner circle) for a second. Here’s our playbook:​

We launch a series of Executive Orders in the first week. Beforehand, we identify one that our opponents will complain loudly about and will dominate the news cycle. Immigration ban. Perfect.

We craft the ban to be about 20 percent more extreme than we actually want it to be — say, let’s make the explicit decision to block green card holders from defined countries from entering the United States, rather than just visa holders. We create some confusion so that we can walk back from that part later, but let’s make sure that it’s enforced to begin with.

We watch our opposition pour out into the streets protesting the extremes of our public measure, exactly as we intended. The protests dominate the news, but our base doesn’t watch CNN anyway. The ACLU will file motions to oppose the most extreme parts of our measure, that’s actually going to be useful too. We don’t actually care if we win, that’s why we made it more extreme than it needed to be. But in doing so, the lawsuit process will test the loyalty of those enforcing what we say.

While the nation’s attention is on our extreme executive orders, slip a few more nuanced moves through. For example, reconfigure the National Security Council so that it’s led by our inner circle. Or gut the State Department’s ability to resist more extreme moves. That will have massive benefits down the road — the NSC are the folks that authorize secret assassinations against enemies of the state, including American citizens. Almost nobody has time to analyze that move closely, and those that do can’t get coverage.

When the lawsuits filed by the ACLU inevitably succeed, stay silent. Don’t tell the DHS to abide by the what the federal judge says, see what they do on their own. If they capitulate to the courts, we know our power with the DHS is limited and we need to staff it with more loyal people. But if they continue enforcing our executive order until we tell them not to, we know that we can completely ignore the judicial branch later on and the DHS will have our back.

Once the DHS has made their move, walk back from the 20 percent we didn’t want in the first place. Let the green card holders in, and pretend that’s what we meant all along. The protestors and the ACLU, both clamoring to display their efficacy, jump on the moment to declare a huge victory. The crowds dissipate, they have to go back to work.

When the dust settles, we have 100 percent of the executive order we originally wanted; we’ve tested the loyalty of a department we’ll need later on; we’ve proven we can ignore an entire branch of government; and we’ve slipped in some subtle moves that will make the next test even easier.

We’ve just tested the country’s willingness to capitulate to a fascist regime.

Assuming this narrative is true (again, I have no idea what the administration intends), the “resistance” is playing right into Trump’s playbook. The most vocal politicians could be seen at rallies, close to the headlines. The protests themselves did exactly what they were intended to: dominate the news cycle and channel opposition anger towards a relatively insignificant piece of the puzzle. I’m not saying that green card holders should be stuck in airports — far from it. I’m saying there might be a much larger picture here, and the immigration ban is a distraction.

So, for those that believe that the power consolidation narrative is true and want to oppose it, how does that happen?

First, stop believing that protests alone do much good. Protests galvanize groups and display strong opposition, but they’re not sufficient. Not only are they relatively ineffective at changing policy, they’re also falsely cathartic to those protesting. Protestors get all kinds of feel-good that they’re among fellow believers and standing up for what’s right, and they go home feeling like they’ve done their part. Even if protestors gain mild, symbolic concessions, the fact that their anger has an outlet is useful to the other side. Do protest, but be very wary of going home feeling like you’ve done your job. You haven’t.

Second, pay journalists to watch for the head fake. That’s their job. Become a paying subscriber to news outlets, then actively ask them to more deeply cover moves like the NSC shakeup. We can no longer breathlessly focus media attention on easy stories like the immigration ban. The real story is much more nuanced and boring — until it’s not.

Third, popular attention must focus less on whether we agree with what the government is doing, and more on whether the system of checks and balances we have in place is working. It is a much bigger deal that the DHS felt they could ignore a federal court than that Trump signed an executive order blocking green card holders in the first place. It is a much bigger deal that Trump removed a permanent military presence from the NSC than that he issued a temporary stay on immigration. The immigration ban may be more viscerally upsetting, but the other moves are potentially far more dangerous.

Once again, I’m desperately hoping that none of this narrative is actually true, and that we merely have a well-intentioned administration with some execution problems. I’m also hoping and praying that the structure of our democracy is resilient even to the most sophisticated attacks. I’m hoping that the better angels of our nature will prevail. But with each passing day, the evidence tilts more in the other direction.

This story originally appeared on Medium. Check it out here.