"I don't deserve this but I will treasure it like I treasured Ray and our friendship." 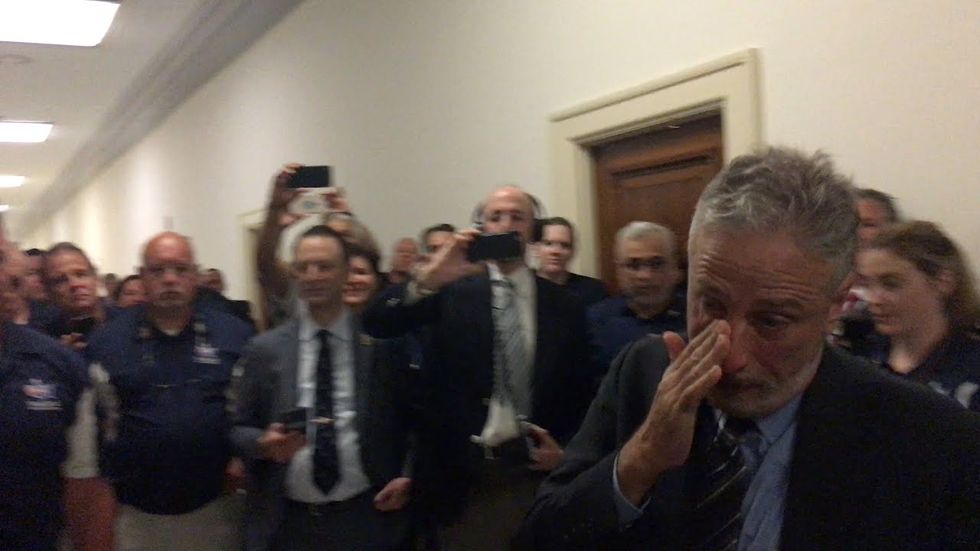 This critical fund ensures medical support for people affected by the terrorist attacks of September 11, 2001, and until recently, Congress was refusing to act in order to renew the bill. That is, until Stewart stepped up (in a role he has had to play again and again) to demand US lawmakers do the moral thing in an impassioned hearing that went viral:

Stewart’s appearance highlighted the need for Congress to step up and do its basic duty in honoring the memory and legacy of those who gave their lives, their health and their security on 911. Not only had a Republican led Congress failed to replenish the fund, new committee chair Steve Cohen (D-TN) noted that several members didn’t even bother to show up for Stewart’s testimony:

"I'm going to defend the institution, it's sometimes not easy to defend. But it's the bulwark of democracy — and that's the United States Congress," Cohen said."My subcommittee, every single member on my side, which is eight of us, have been here today," Cohen continued. "All these empty chairs that's because it's for the full committee, not because it's disrespect or lack of attention to you."

The importance of his work was on display during an emotional interaction with former first responders who put their lives on the line that fateful day nearly twenty years ago. Kenny Specht (FDNY, Retired) presented Stewart with a gift from the brother of recently deceased fireman Ray Peifer. Ray passed away in 2017, due to cancer directly related to health consequences suffered as a result of confronting the September 11th terrorist attacks in New York City.

As the video notes, Ray and Jon became friends through their work together fighting for victim’s compensation back in 2015. Stewart was inspired by Ray’s “quiet grace and determination” to fight for what was right even in the face of terminal cancer. He delivered Ray’s eulogy in 2017. It’s no wonder Stewart was moved to tears accepting this exceptionally moving gift. Here’s hoping that the victims and their advocates don’t have to keep fighting for the government to ensure they receive the care they so rightfully deserve.